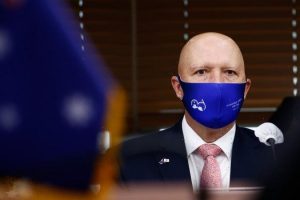 Several federal cabinet ministers were called to a top-secret meeting in Canberra on Wednesday ahead of a major international development expected out of the United States on Thursday morning.

Sources familiar with the development said some members of cabinet were granted border exemptions to urgently fly to Canberra for the hastily arranged meeting, which sources say will have international significance. 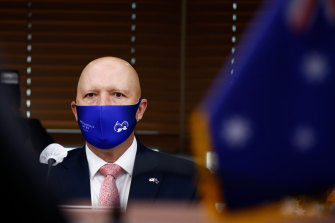 Defence Minister Peter Dutton is in Washington for a series of meetings.Credit:Getty

Defence Minister Peter Dutton and Minister for Foreign Affairs Marise Payne, who are in Washington for a series of meetings over the next two days, were said to have joined the meeting via a secure connection.

Opposition Leader Anthony Albanese and three other senior members of his frontbench were also given the rare opportunity to be briefed on the highly sensitive matter.

Several Coalition MPs told this masthead they had been ordered at short-notice to dial into a rare conference call for 9.30am on Thursday, but none were aware of the reason for the briefing.

It is expected an announcement, also significant to the United States and British governments, will be made at 7am Australian time.

Prime Minister Scott Morrison will travel to Washington next week for a meeting of the Quad alliance which includes the US, India Japan and Australia. Mr Morrison will have his first in-person one-on-one meeting with US President Joe Biden during the trip.

Mr Dutton and Senator Payne are to meet face-to-face with their US counterparts Secretary of State Antony Blinken and Defence Secretary Lloyd Austin.

Measures to counter China’s trade strikes and other “grey zone” attacks, as well as an Australian request to be granted greater access to US missile technology, will be on the agenda in the meetings.

The withdrawal from Afghanistan and the potential for future terrorism threats will also be discussed.