International rock icon MIYAVI is back with his new ‘energetic, positive and futuristic’ album. He shares how 2020 influenced ‘Imaginary,’ why he decided to cover ‘Smells Like Teen Spirit,’ and more!

“My mission as a performer is to empower people and inspire them,” MIYAVI tells HollywoodLife. That desire to lift the spirits of the world is found at the heart of Imaginary, the new album from this unparalleled guitar talent. Eleven tracks of MIYAVI’s signature high-energy, surging rock, Imaginary is a neon-colored lightning bolt illuminating all the colors of the world hidden by the darkness of a long, moonless night. With the lead single “New Gravity,” MIYAVI seeks to defy the pressures and weight of everyday life – and that message weaves itself throughout the new album.

“We must be believers in our own creations, and that’s why I named this album Imaginary,” he tells HollywoodLife over email. “I hope that everyone who listens to this new album feels that the future is not dark and maybe the world is going to be okay, and there is some light in the future.” While MIYAVI has his eyes pointed to the future, Imaginary also celebrates the past with two renditions of two equally powerful songs: “Smells Like Teen Spirit” by Nirvana and P.O.D.’s 2001 anthem, “Youth of the Nation.”

MIYAVI didn’t seek to recreate the grunge classic, note-for-note. Instead, he created a version that was faithful to the spirit of the original but was distinctively his. “With the guitar, the beat, and the way I sing – I tried to reimagine the track as fans don’t want to hear the same arrangement as the original,” he says. “I think by doing something different, something surprising, something fresh, then that’s how I show my respect for the writers, the creators, and the artists.”

During this EXCLUSIVE interview, MIYAVI shares what it was like to work with Troi Irons on “Youth of Nation.” He also tells why “Are You With Me” has a ska vibe to it, dishes his upcoming North American tour, and shares what propels this amazingly prolific artist (Imaginary is his 15th album!) to keep creating.

HollywoodLife: “Imaginary” seems inspired by the past year, when many felt lonely and were forced to imagine all the good times they would normally be having. Can you share how this song came about and why you decided to name your album after it?

MIYAVI: Yes, the album is inspired by the past year. I had to ask myself, “Why are we in this situation, and what can we musicians do?” As musicians, we are also searching for meaning, and the past year made me question so many things. Imagination is the key for a bright future. During a pandemic, as we learned, planning for the future can be difficult when so many things are uncertain. So many industries were impacted by the pandemic, including the film and music industries. My mission as a performer is to empower people and inspire them. That inspiration gives us musicians the motivation to help audiences escape and see into the future. We must be believers in our own creations, and that’s why I named this album Imaginary. I hope that everyone who listens to this new album feels that the future is not dark, and maybe the world is going to be okay, and there is some light in the future. That’s what I wanted to depict with this creation.

You’re a renowned and celebrated guitarist. Did you experiment with any new styles on Imaginary? “Are You With Me” has a bit of a ska-vibe to it, so I was curious if you used this album as a chance to play around.

Yes, I like to evolve my sound on every album. This album recording was a bit challenging because I usually record when I’m in Los Angeles as my music team is based in LA, but I wasn’t able to fly over because of the pandemic. So, for this album, we had to work virtually with my producer Yung Spielburg in LA and me in Tokyo. In 2020, I was supposed to release two back-to-back albums, but it didn’t happen, of course. Plus, I didn’t want to release Imaginary without having a tour, as I love to perform. Without being able to perform on stage, in front of an audience, makes releasing an album feel incomplete. I recorded all my vocals in Tokyo, and most of the track production was completed in LA. My Tokyo-based producer Jeff Miyahara has a pop essence that brought my sound into a whole new world visuals-wise. My production team has a fresh mix of East meets West vibes, and that allows us to be very creative. For “Are You With Me,” I wanted to write something with a cyberpunk vibe that’s dark and edgy, so I put that song into this album. 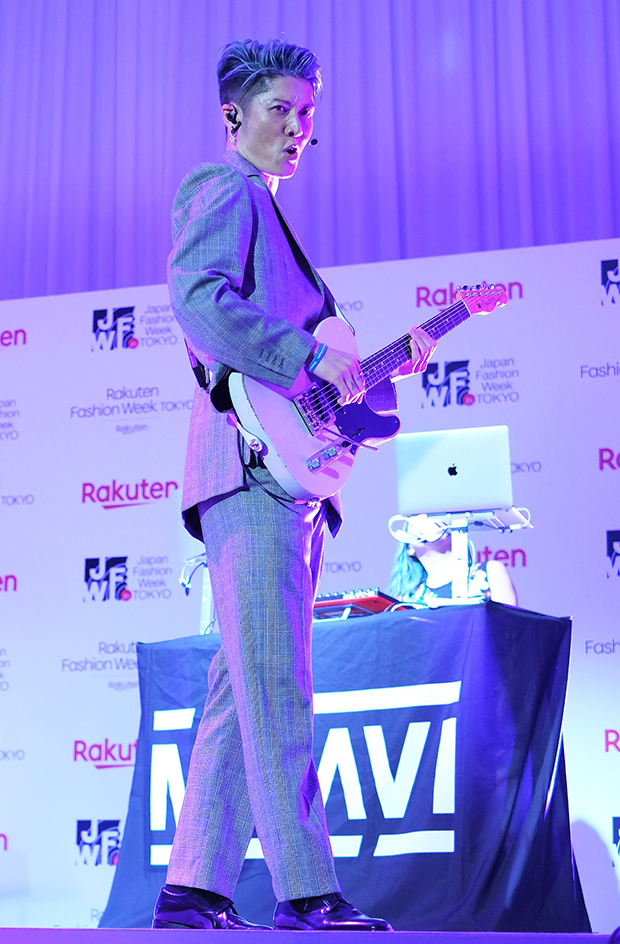 You reimagine “Smells Like Teen Spirit” on the album Imaginary (which is timely considering Nevermind turns 30-years-old in 2021.) What inspired you to create this energetic version of the grunge classic? And do you remember the first time you heard the song?

When the original song came out, I was blown away by Nirvana’s energy and attitude. “Smells Like Teen Spirit: has always been my favorite track. Recording a cover was a challenging process as a guitarist. But I have the confidence to approach recording cover tracks by incorporating my own style and sounds. With the guitar, the beat, and the way I sing – I tried to reimagine the track as fans don’t want to hear the same arrangement as the original. I think by doing something different, something surprising, something fresh, then that’s how I show my respect for the writers, the creators, and the artists. I hope Kurt Cobain enjoys our version.

You also recorded a version of P.O.D.’s “Youth of the Nation” with Trio Irons. What led to this collaboration? (Also, I appreciate the recreation of Jimi Hendrix’s version of “The Star-Spangled Banner” in the song.)

Around the time we recorded this version was the year that so many young people were marching in the streets. In Japan, our youth became active in climate change, politics, and other conflicts. I thought it was really important to amplify their voices, so we got the melody from the original song and recreated it. The two versions of this song are links to their respective generations. With Troi, she’s a great singer, and we met in LA. She performed with me on stage several times during my previous tours. She’s a very expressive and special singer. The way Troi sings elevated this track to a new level.  I especially love the scenery in youth, young people chanting this song all together. 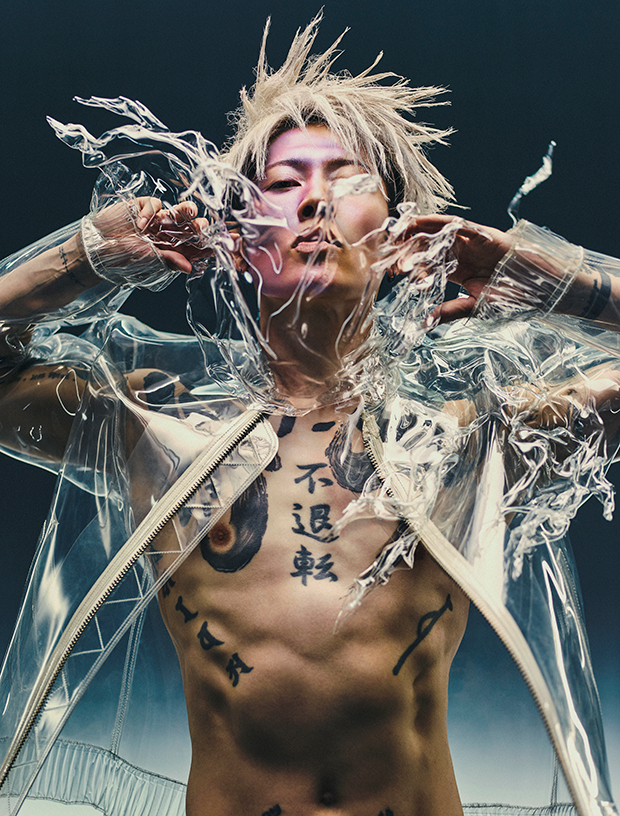 It might just be me, but Imaginary has a very uplifting vibe. It’s hard to imagine anyone listening to this and being sad afterward. Even the softer moments seem hopeful. Was that a goal – to make a positive, hopeful album?

This is what I was telling my team. I didn’t want to be too dark and gloomy with the songs on this album. We have some dark tracks, but I didn’t want to add others. My role is to uplift people, bring energy to people, and share good times with people. I just wanted to make something energetic, positive, and futuristic. Also, since these days, I am into e-sports as well as VR and other digital mediums – I wanted to express myself with my audience by bringing a cutting-edge vibe to the music while making it more uplifting.

You’re incredibly prolific. You’ve released at least one major project each year since 2015 – including 2020’s Holy Nights. What drives you to be so active?

I don’t know. Actually, I’m not trying to be that active, especially with the kids and my new baby that was born this year. The time I spend with my family is also very important. But as I said, we were initially planning to release two albums last year. I think it’s the Japanese people’s work ethic. Also, it’s a great thing that there are fans from all over the world who love the music I make, and thanks to them, I’ve been able to try new things when being so active. Which allows me to dip my hand into music, acting, and fashion.

This September, you’re setting out on a 19-city/20 show tour in North America. What are your thoughts heading into this tour?

It’s thrilling even with the pandemic. After this tour, I might need to have another quarantine when I come back to Japan, but it’s my honor to be in the U.S. to perform. I’m so grateful to perform, to meet the fans, and see the audience at concerts. Especially now, everything is remote, and that’s a hard fact that we’ve had to deal with. After the pandemic, I think virtual experiences will remain, but at the same time, it’s great to meet people in person. If there’s an opportunity to travel and perform, then I’d like to do that anytime for my fans.

Imaginary is out now.