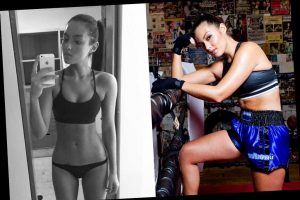 Weak with hunger and weighing just 98 pounds, frail model Mia Kang collapsed into the arms of a stranger after a pervert followed her through the streets of Milan.

The creep, who had been pleasuring himself during the pursuit, backed off when the good Samaritan yelled at him in Italian. But the 2006 incident left Kang a wreck.

“I just wanted to go home, lock the door, get in bed and stay there,” recalls the 5-foot-9 Sports Illustrated beauty in her memoir “Knockout” (Abrams Books, out Oct. 20).

Fourteen years later, if the same thing happened, the sex pest might well be sipping his food through a straw. A much healthier Kang is a force to be reckoned with now that she combines modeling with professional Thai fighting.

“I wouldn’t advise charging at a man who is trying to come after you, but I would be far more confrontational,” the 31-year-old told The Post. “I don’t take s–t and I am not intimidated.

“I walk around with a confidence that makes me feel like a different person.”

“Without it, I think I would have spiraled further down into my eating disorders and depression,” said the Hong Kong-born Manhattan resident, who was bullied for being overweight as a child. “It opened a door for me and threw me a lifeline.”

Kang discovered the sport in 2016 — the same year she won the Sports Illustrated Swimsuit model search contest — at a time when she was starving herself to fit into size 2 clothes for high-profile fashion clients.

A succession of liquid-only diets plus the misuse of laxatives, diuretics and cigarettes took a toll on her mind and body. In her book, she admits to “suicidal thoughts,” wondering whether killing herself was the only escape from the “vicious cycle” of restricting and bingeing.

Thankfully, a 10-day vacation in Thailand altered Kang’s trajectory. She was intrigued after watching a group of Muay Thai fighters in action. She tried it for herself, leading her to stay on Koh Samui for six months working out at a no-frills gym on the island.

“How you look when you are training is the last thing on anybody’s mind,” said Kang, who was desperate for a break from her appearance-led industry. “It’s all about skill and knowledge. You check your ego at the door.”

Another bonus: She found it impossible to find the strength to fight without changing her destructive eating habits. Her weight stabilized after she ate “balanced meals” that were “in accordance to the physical activity I was doing every day.” As a result, she grew into a more sustainable size 4 to 6.

Explaining the lure of fighting, Kang added: “When I’m modeling, I feel like I am treated so preciously and delicately. People say: ‘Just sit in the chair and nobody touch her.’ With martial arts, it’s the complete opposite as you go through the journey of getting beaten up and then picking yourself back up again.”

Not surprisingly, the bigwigs at Kang’s modeling agency found it difficult to accept her newfound obsession with Muay Thai. Kang’s face was her fortune, and the risk of injury was high.

However, in May 2017, they allowed her to compete professionally in the ring against experienced Thai fighter Nong B. Despite a pounding, during which she suffered a deep cut under her eye, the model emerged victorious.

“I didn’t work for about three to four weeks, but I factored that into my scheduling when I took the fight,” Kang said. “I was mentally prepared for more serious injuries like a broken limb or concussion, so I was quite pleased with my post-fight condition.”

She pointed out that, since modeling is generally such a short-lived career, she feels she shouldn’t ever turn down jobs in favor of martial arts. But she added, “A massive part of my heart wants to be in the ring. It’s tough!”

As far as the mentality of a fighter is concerned, Kang said that the inclination to survive at all costs is “primal.”

“Instinct kicks in, because [the opponent] is really trying to take your head off and there is this realization of: ‘OK, she’s trying to kill me. I need to kill her,’ ” she said.

Now a size 6 to 8 and weighing around 170 pounds, the singleton is temporarily living on Phuket and training in a jujitsu program. Her Muay Thai career and modeling assignments for brands like Guess are on hold because of COVID-19 and the resulting worldwide travel bans.

Yet Kang remains optimistic about a future she once feared she might not see. “There were times in the midst of my eating disorders when I thought, ‘This is how life is going to be, and it’s exhausting.’ But it’s no longer this all-consuming thing,” she said.

“I’m so lucky to still be modeling at the age of 31 while practicing martial arts. I want everybody to know there is light at the end of the tunnel.”

Sharing hope with others was her key motivation for writing her book. She chose to publish it this fall as the body-positivity movement grows and her social-media reach is far, with 296,000 followers on Instagram.

“There is no better feeling than being a strong and confident woman at any size,” Kang writes. “I want to help other women access their inner badass.”

END_OF_DOCUMENT_TOKEN_TO_BE_REPLACED

END_OF_DOCUMENT_TOKEN_TO_BE_REPLACED
We and our partners use cookies on this site to improve our service, perform analytics, personalize advertising, measure advertising performance, and remember website preferences.Ok