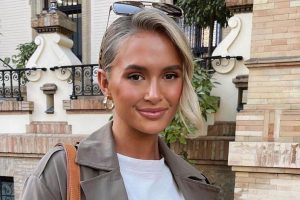 Following a robbery at her home earlier this month, Molly-Mae Hague is enjoying a much-needed change of scenery in the Italian Alps and has hit the slopes for a spot of skiing.

“It’s going to be lots of mountain stories over the next couple of days… not sorry. In awe of the views,” the former Love Island star said on Instagram Stories of the trip. The following morning she was back with another style for her fans, this time wearing a super long ponytail that’s giving us Barbie vibes.

Considering Molly-Mae’s partnership with hair brand Beauty Works, it’s likely that these looks were created with the help of extensions.

However, she did recently share a glimpse at her extension-free hair with a curly look, likening herself to musical character Annie on Instagram Stories.

While it looks like the star has managed to get some R&R during her trip, it’s clearly not all fun and games as she teased, “You’re not ready to see what we’re shooting” alongside the drooling emoji.

It was reported at the end of October that Molly-Mae and boyfriend Tommy Fury’s Manchester home had been the target of a break-in, and a “gang” had stolen hundreds of thousands of pounds worth of belongings.

Items stolen while the pair were in London included jewellery and designer clothes to the value of around £800,000.

Their Cheshire apartment has since been put up for rent after it was reported they no longer felt safe in their home and would not return.

Despite the horrible shock Molly-Mae has managed to put on a brave face in the days following her ordeal, wowing with her looks at the Pride of Britain Awards and a beauty pageant-inspired Halloween Costume.

We can’t wait to see her next beauty look!

For all the latest celebrity news, including their biggest beauty secrets, sign up to the OK! Daily Newsletter now