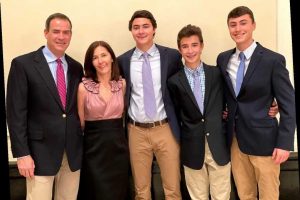 A New Jersey mother of three is in desperate need of a new drug that could be a game changer in her battle with amyotrophic lateral sclerosis, the deadly neurological disease that takes away one's ability to control muscles.

In an emotional interview with PEOPLE, Lisa Stockman-Mauriello and her husband Bob Mauriello detail their race against time. Unfortunately for the 51-year-old — who was diagnosed with Bulbar ALS earlier this year — she says her chances of survival hinge on whether she can obtain Tofersen.

The new drug is distributed by the pharmaceutical company Biogen, which says they are unable to help because enrollment in the clinical trial has already closed.

For Lisa, waiting until the pharmaceutical company's study is complete may not be possible, as Bulbar ALS — which leads to loss of movement in the face and neck — is known for a quick progression. Those who suffer from Bulbar ALS first experience speech or swallowing problems, as opposed to symptoms in the arms or legs, according to the National Institute of Neurological Disorders and Stroke.

"They keep saying, 'Oh, well, just wait until late this year, early next year, and we'll be able to open it, expand access,'" Bob, also 51, says of the drugmaker. "And that would be fine if she had three to five years to live. But we're talking months, and it's going to be too late."

Biogen addressed the difficult decision in a letter to Lisa in March, NBC affiliate WCNC reported.

"Let me begin by expressing my personal, and our team's collective empathy upon learning of your ALS diagnosis. We can only imagine the magnitude of the devastation that you and your family must be experiencing," the letter began, according to the outlet. "Since we learned of your request for early access to Tofersen, which is still being tested in a clinical study, we've rapidly brought together our medical, research, regulatory and senior leadership colleagues to thoroughly evaluate and challenge our own policies in light of the situation for you and other people with ALS. We have also been in touch with your physician since we received your request."

"Obtaining approval for a new drug from regulatory authorities around the world is the fastest way to help the largest number of people with a specific disease and requires the completion of clinical testing," the letter continued, per WCNC. "Until efficacy and safety are determined, we must act with the interests of all patients in mind. Providing individual access to Tofersen at this time could jeopardize access to Tofersen for hundreds of SOD1-ALS patients by impeding our ability to complete the study that will determine whether Tofersen is efficacious and safe and to seek subsequent regulatory approvals as quickly as possible." It was less than a year ago that Lisa's life was forever changed.

The mom of three, who worked in public relations and advertising for Syneos Health, says she noticed something was wrong in August, when she had trouble calling in her dogs. Around that time, Lisa was also experiencing difficulty raising her arm. After seeing a variety of doctors, Lisa says she was officially diagnosed with Bulbar ALS in January.

"She knew enough about it to know that there's no treatment for it and the life expectancy is fairly short," says Bob, who often speaks for his wife when she is unable to speak for herself. "So she cried the whole way home… and when she got home, she couldn't even bring herself to get out of the car because she didn't know how she was going to tell us." Following her diagnosis, Bob says Lisa's doctors informed them about Tofersen, which specifically treats the SOD1 gene mutation that Lisa has.

"I think there is evidence to suggest that this therapeutic would be helpful to her, and you know, in ALS, we don't have a lot of therapeutic options — we are very limited as to what we can offer our patients," Shneider said. "So I feel this is her best chance, for a therapeutic that could make a meaningful difference in her disease."

With each day that passes, Bob feels an increased sense of urgency.

"Two months ago, when we were still doing some family trips, her voice was a little bit hoarse. She was losing her breath more easily than normal for someone who's always been really active. But we had no idea what was going on," he says. "Now, I'm feeding her every meal through tubes. She can't eat any solid food. I'm pushing her around on the wheelchair on the beach. I have to help her get ready for bed." When Lisa and Bob approached Biogen about the drug, they claim they were denied access, despite Lisa meeting the FDA's criteria to obtain it through a pathway called compassionate use.

According to the FDA, compassionate use applies to patients who have a life-threatening condition with no other treatment options available, and want to gain access to an investigational medical product.

"We're tremendously appreciative of the research that they've done and we know that Biogen's goal is to get something approved and out to the market as quickly as possible so they can help people," Bob says. "They absolutely could allow this, and they're choosing not to."

"Biogen has this tagline — [Where Science Meets Humanity] — and they've done an awesome job with the science part," he adds. "But the humanity part, unfortunately, at least to us, feels like it's lacking in this specific case." To help their cause, Lisa and Bob set up an online petition, where they are asking for Biogen to grant her access to Tofersen. So far, the petition has garnered over 100,000 signatures.

"It's almost hard to really imagine this outpouring," Bob says. "We're proud of the lives that we've had… But didn't realize quite how much of an impact we'd had on people and how much support we have."

Bob has also spearheaded the Legacy for Lisa fund at the Hussman School of Journalism and Media at their alma mater, the University of North Carolina, Chapel Hill.

The goal is to cover endowed professorships, summer internships, guest speakers and scholarships to help the next generation of healthcare communicators.

"We want to celebrate the life that she's led and the legacy that she leaves behind," Bob says. "She's tremendous. I joke that I'm the President of the Lisa Stockman-Mauriello fan club now for 25 years, and I'm proud of that role because she's an amazing person."

While the family waits to see what will happen, Lisa says she is finding strength in Bob and their sons, Scott, 22, Luke, 18, and Dean, 14. Her dream is to see them graduate from college, high school and eighth grade in just a few months.

As for Bob, he says he's learned to "appreciate every day that you have, because you just don't know," and is embracing all the moments he gets to spend by his wife's side.

"The boys are supportive, but they have big lives ahead of them, and you don't want them to focus too much on this," Bob adds. "For us, we want to spend our time witnessing their achievements and taking pride in our children because that's part of Lisa's legacy."

The couple tells PEOPLE that they encourage readers who want to help them to sign the petition and contact Biogen.

In the drugmaker's statement to PEOPLE, Biogen addresses the complexities of the situation and reiterates the points made in their initial letter to Lisa:

We brought together people across the organization with expertise in bioethics, medicine, research and regulatory guidelines as well as our most senior leadership to challenge our own policies in light of the situation for Lisa and other people with ALS.

We share the urgent desire to bring new medicines to people suffering from ALS. Obtaining approval for a new drug from regulatory authorities around the world is the fastest way to help the largest number of people with a specific disease.

Our Phase 3 placebo-controlled study of tofersen, VALOR, is designed to investigate the safety and efficacy of tofersen in people living with SOD1-ALS. The study has completed enrollment and data are expected in the second half of 2021.

We are working as fast as we can and preparing to open an Early Access Program after VALOR patients are no longer randomized to placebo and if VALOR data show that tofersen is safe and effective.

We are acting as quickly as possible with the interests of all patients in mind within the current regulatory framework, with the hope of bringing new medicines to the ALS community.