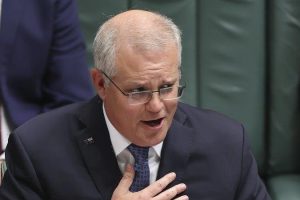 Liberal and Nationals MPs are being urged to raise money for a federal election to be held next year out of concern at the power of activist groups and the union movement to threaten the government’s hold on power.

Prime Minister Scott Morrison told government MPs to “turn up and shake hands” at events so they could gain the friends and finances they will need to fend off groups such as GetUp. 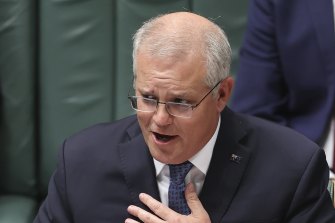 PM Scott Morrison told Liberal and Nationals MPs: “The worst day in government is better than your best day in opposition.”Credit:Alex Ellinghausen

Mr Morrison told the Coalition party room to take a “steady as she goes” approach because that was how the government had got through the coronavirus pandemic so far, said a Coalition spokesman who relayed the Prime Minister’s words.

“He said there’s still a year to the next election. There’s a lot more work to do this year, the election is next year,” the spokesman said.

Mr Morrison told the MPs, in their regular private meeting on Tuesday mornings when Parliament is sitting, to keep selling the budget to voters.

He said ministers were being “put on watch” to make sure their departments were delivering budget policies and emphasised the risk of losing power.

“The worst day in government is better than your best day in opposition,” he told the room.

He noted that fewer than half the assembled MPs had been in Parliament when the Coalition was in Opposition, saying “you don’t know how desolate it is” to be out of government.

A survey this month for The Sydney Morning Herald and The Age by research company Resolve Strategic found 59 per cent of voters prefer an election next year, with 46 per cent expecting the Coalition to win and 21 per cent tipping Labor.

Mr Morrison asked all MPs to focus on fundraising for the election campaign by using every opportunity when ministers visited their electorates.

“He said that we need a war chest because we’re going to have the biggest war chest thrown at us from the unions and GetUp 12 months away at the election,” the Coalition spokesman said.

“He said if you stay home on Sunday afternoon because you’re tired but you’ve got an event to go to, you should be going to the event. Turn up and shake hands.”

But the union movement has contributed millions of dollars in help for Labor through payments as well as advertising campaigns.

GetUp has also helped the progressive side of politics by targeting Coalition MPs. The activist group has raised $10 million over the past 52 weeks, according to a running tally it posts on its site. Unlike the major political parties, GetUp discloses donations as they are made.

GetUp national director Paul Oosting said the group was using the money to campaign for renewable energy, protecting Indigenous cultural heritage, media diversity and standing up for people who lived below the poverty line.