A raven perched on the shoulder of a woman with flaming hair is Iraqi artist Marwan Fathi's symbol for the terrible events he and his home city Mosul have had to endure.

Three years under the oppressive and violent rule of Islamic State and the military campaign that drove it out in 2017 left much of the northern city in ruins. Thousands were killed, rendered homeless or maimed. Those who survived are deeply traumatised. 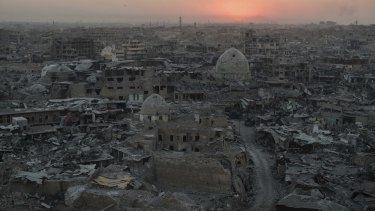 The sun sets behind destroyed buildings in the west side of Mosul in this 2017 photo.
Credit:Felipe Dana

"I still jump awake at night thinking an air strike is about to hit or that they are coming to take one of us," Fathi, 36, said. "Everyday is a struggle."

Fathi's work is on display in "Return to Mosul" – the city's first art exhibition since before it was seized by Islamic State, whose ultra-hardline version of Sunni Islam prohibits most art forms.

Artists from across Iraq are taking part in the six-day show, including many who lived in Mosul when it was in the militants' grip.

Fathi said the artists who stayed in the city lived in constant fear and despair.

"There was a time when we considered killing ourselves. We reached that low. But then we thought, what would happen to the children?" Fathi, a professor of fine arts, said.

The show is in the newly reopened Royal Hall of the Mosul Museum, which was looted and destroyed by Islamic State and in the ensuing war to wrest control of the city.

Ahmed Mozahem, another Mosul-born artist, continued to work in secret while the city was under the militants'. Using a writing pad he kept hidden to avoid discovery, Mozahem produced 40 pencil drawings that are now among his most cherished possessions, an expression of what he and his family suffered.

For City of the Whale, his painting in the exhibition, Mozahem drew on the story of the prophet Jonah and the whale, which features Nineveh, the ancient Assyrian city that stood roughly where Mosul is today.

Following their capture of the city in 2014, Islamic State went on a rampage, destroying many of Mosul's ancient sites and artefacts, including a shrine believed by many to be Jonah's tomb.

The militants not only destroyed the city, Mozahem said. "They also killed something inside, our spirit."

But Matthew Vincent, an American archaeologist, says technology can help preserve some of what was lost. Vincent is a co-founder of a crowdsourced, digital preservation project called Rekrei, which collects photographs of damaged or lost monuments and artefacts to recreate these in 3D representations.

At the Mosul Museum, visitors are now able to catch virtual glimpse of ancient Assyrian treasures destroyed by Islamic State. One of them, the Lion of Mosul, was a colossal Assyrian guardian lion from about 860 BCE, one of two that stood at the entrance of the Temple of Ishtar at Nimrud, Iraq.

"It is never going to replace the original but new technology is giving us a path we simply didn't have before," Vincent said.