A furious mother has branded her husband ‘selfish’ and ‘d***ish’ for giving up smoking on Boxing Day – because he’s making his family suffer with his snappiness.

The anonymous woman took to Mumsnet to vent about his behaviour, saying she was angry that her ‘hard earned’ Christmas break – her first time off in six months – had been ruined.

She revealed he had already given up smoking ten years ago but started up again this year, wasting more than £1,000 on his habit at a time they couldn’t afford to go on holiday.

Her post on the parenting forum, entitled ‘am I being unreasonable to be really annoyed DH decided to give up smoking on Boxing Day’, has divided users.

Some slammed the woman for being unsupportive, while others agreed that her husband is being selfish for choosing an awful time to quit, knowing full well how difficult it can be. 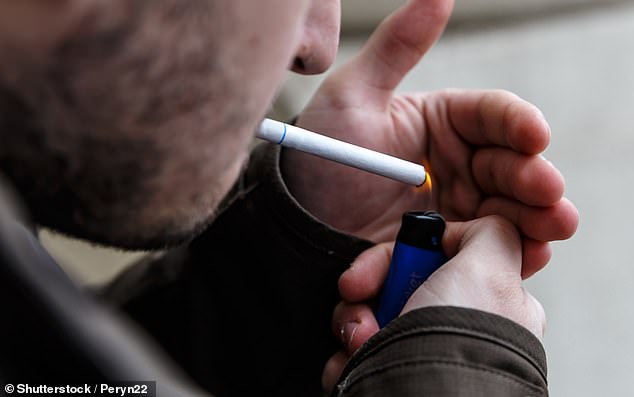 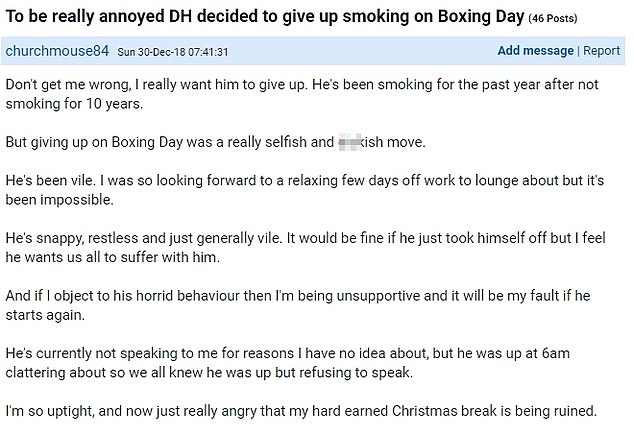 Writing on Mumsnet, she branded his decision ‘selfish’ and ‘d***ish’ – but not everyone has agreed with her

Under the username Churchmouse84 she wrote: ‘He’s been vile. I was so looking forward to a relaxing few days off work to lounge about but it’s been impossible.

‘He’s snappy, restless and just generally vile. It would be fine if he just took himself off but I feel he wants us all to suffer with him.

‘And if I object to his horrid behaviour then I’m being unsupportive and it will be my fault if he starts again.’

She later revealed she’s worried he will start smoking again and her miserable Christmas break will have ‘all been for nothing’.

Mumsnet user RayRayBidet felt little sympathy for the mother, saying: ‘At least he has given up?’

Another added: ‘He says you are being unsupportive because you are.’

One user suggested: ‘Go to a chemist and buy him some nictotine patches/gum. It’ll help him and you’ll be supportive rather than just moaning.’

Churchmouse then added that her husband was refusing to use nicotine patches, preferring to go cold turkey.

Other mothers sympathised with her, saying their own husbands had been awful while giving up.

PumpkinPie2016 said: ‘YANBU [you’re not being unreasonable] – it’s good he is giving up but it’s not ok to ruin everyone else’s time off!

Others sympathised with the mother, saying he chose the problematic time to absolve himself of blame if he failed in his attempt to quit

‘He either needs to take himself off or he needs to get support from a pharmacy/GP. Can you and the kids go out on your own somewhere? Even if he doesn’t want that.’

One user added: ‘He is looking to absolve himself of blame if he doesn’t manage to quit. If he genuinely wanted to not smoke again he would be apologising for being snappy and irritable.’

Another wrote: ‘You are being supportive, the posters who have said otherwise are wrong and your DH is being a martyr. Pathetic and immature.

‘If he hadn’t already quit once, it might be slightly more forgivable but he knows its hard and he CHOSE when to give up (and to start again when he did!!).

‘I’d be utterly p***ed off too OP. I actually think you need to tell him to stop being a bloody martyr, he chose to start, he chose to stop, you’ve tried to support him, had it thrown back in your face and so balls to him or other such dismissive quote!’