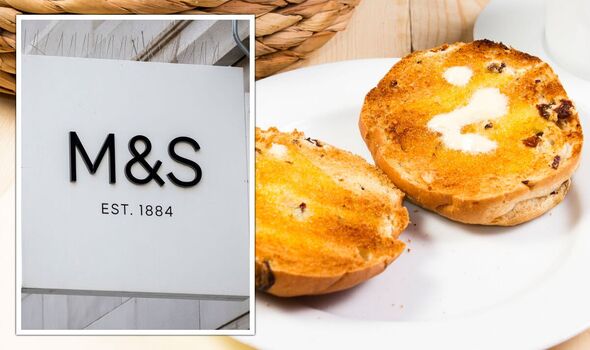 Marks and Spencer’s toasted tea cake has caused uproar this week as one customer was refused one due to it being after 11am. An M&S chief has since put a stop to the restriction.

The M&S store cafes only serve teacakes up until 11am, as a breakfast item.

M&S shoppers have taken to social media complaining about the ban, hoping instead to enjoy a teacake in the afternoon too.

The sweet baked buns are made with spices and dried currants or sultanas are served cut in half, toasted and buttered.

One unhappy customer, Marion Hansford, even wrote a letter to The Daily Telegraph, which Radio 3 host Petroc Trelawny tweeted.

It read: “As I’m not on a bus route and have ceased driving, I don’t get the chance to go my nearest shopping centre often, but when I do I like to take a break from shopping and treat myself to a coffee and a toasted teacake in Marks and Spencer.

“Last week, when I asked for the toasted teacake, I was told that teacakes are now a breakfast item and not served after 11am. Words fail me.”

Petroc retweeted this letter with the caption, “No more all day toasted teacakes?”.

Social media was on Marion’s side, with 384 people retweeting and over 3,000 people liking it.

Hundreds flocked to the comments to share Marion’s sentiment.

@paul_a_murray commented: “As someone who treats a trip to the John Lewis cafe for a pot of tea and piece of cake as a central part of my occasional shopping experience, I have great sympathy with Marion Hansford.”

When it comes to toasted teacakes, @Helenus_ believes that “the clue is in the name”.

She tweeted: “@marksandspencer More rational to only serve them after 2pm if you’re going to be silly about it.”

@astrojenny remembered: “Once went to a cafe and asked for a crumpet, only to be told (very snootily) that they were ‘not in season’.”

“While a lot of other outlets boast of “ all day breakfast” you restrict teacakes? They are calls Tea cakes not breakfast cakes. Shame on you.”

M&S CEO Stuart Machin came to the rescue, seeing the outrage of the people.

He tweeted: “Done. Toasted tea cakes will be back on the all day menu. S.”

@PinderPhil responded to the M&S boss: “M&S has a bright future in the hands of Stuart. Twitter just did something amazing everyone.”

M&S customers will now be able to enjoy the toasted teacakes throughout the day, not limited to breakfast.