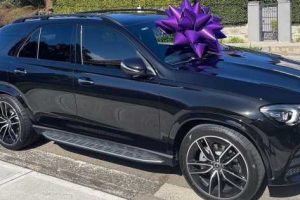 Mum-of-two Roxy Jackenko landed herself in hot water for the second time this week.

Earlier this week, the PR mogul was blasted by cruel trolls after sharing an image of her two children – Pixie, 11 and Hunter eight.

In the snap, the siblings were cuddled close smiling but trolls were quick to spot the pre-teens ‘super sharp’ acrylic false nails.

READ MORE: Polyamorous throuple spark frenzy by hunting for 'someone fun' to take on holiday

Taking to the comments, parents branded the accessory ‘unacceptable’ and too adult for the kid.

This time, the controversial parent has been blasted after posting to her 262,000 Instagram followers ranting about her car drama.

Roxy, from Sydney, Australia, revealed she had a crash while driving her own vehicle so she was forced to take her daughter's expensive Mercedes.

Only shortly after the mum managed to ‘burst’ the back left tyre of Pixie’s luxury vehicle.

“Smash my car, so I take @pixiecurtis car and then I bust her tyre,” she added with a facepalm emoji.

The mother made headlines earlier this year after announcing the purchase of the £150,000 vehicle for the youngster.

Especially since Pixie is only 11, meaning there will be several years before she will be allowed to legally sit behind the wheel.

But the mum revealed the vehicle is used by her or her partner Oliver to take Pixie to and from school, home, the office and anywhere else the little one needs to go.

The pre-teen later launched Pixies Fidgets with Jacenko’s help, after the sensory toy took over playgrounds around the country.

It was a huge success, with the colourful bubble-popping toys selling out in the first 48 hours and earning more than £110,000 ($200,000 AUD) in its first month of operation.

Jacenko also runs the day-to-day activities of her daughter’s businesses and couldn’t be prouder of Pixie’s drive at such a young age.