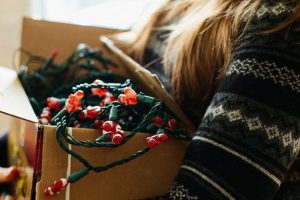 When's the best time to take Christmas decorations down?

Some Brits leave theirs up until after the New Year, while others remove everything straight after December 26.

On parenting forum Mumsnet, one woman revealed she's desperate to get hers down immediately after the big day.

READ MORE: Michael Owen's son 'looks more like his dad than he does' in doppelganger Christmas snap

But she admitted the lights and tinsel won't get taken down until New Year's Eve.

She said: "I am always itching to do it on Boxing Day. I don't, but I want to.

"I usually last until New Year's Eve, but I think this year has felt unChristmassy and I want everything down now.

"I will keep it up for the kids but does anyone else just want it all put away?"

The topic divided other Mumsnet users with everyone discussing the situation.

One Mumsnet user posted under the thread: "Ours are half down.

"We're going away for New Year tomorrow and I don't want to get back in January and still have them up."

Another admitted: "I would love to take them down today, but we have family visiting for lunch on Thursday."

Many people claimed they should remain up until the 12th night, which is January 6.

One wrote: "They went up on Christmas Eve and will come down on Twelfth Night.

"The 12 Days of Christmas are the most restful part of our year. Feasting, friends and no work!"

Others went for somewhere in between those dates, like the start of January.

Previously we revealed when to take Christmas decorations down as it could become "unlucky" to have the tree up.

For most people, January 6 is the day as it's when Epiphany Eve takes place in the days after Christmas.

In countries such as Egypt, Belarus and Serbia, Christmas Day doesn't take place until January 7.

When do you think it's time to take down Christmas decoration? Let us know in the comments below…