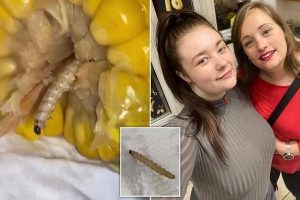 ‘It was a bit like a Bushtucker Trial!’ Disgusted mother is left ‘traumatised’ after her daughter finds a dead CATERPILLAR in her ‘hollow’ KFC corn on the cob

A sickened mum has claimed KFC served her family their very own ‘Bushtucker Trial’ – when her daughter discovered a 1.5-inch ‘dead’ caterpillar burrowed inside her corn on the cob.

Keeley Trundley, 21, from Bromley, ordered from the fast food giant as a treat for her son Jamie Pearson’s 18th birthday, but she says celebrations were halted when Kayleigh-Ann Pearson noticed her cob tasted ‘hollow’.

Upon checking the corn she gasped ‘I think that’s a worm’, but her four siblings and 38-year-old mum didn’t believe her until she showed them her stomach-churning find.

A video shot by Kayleigh-Ann shows the invertebrate, which KFC believe to be a crop-munching corn borer larva, protruding from the centre of the cob with its black head and cream-coloured body pointing outwards.

A corn borer larva is an extremely destructive flesh-coloured caterpillar. 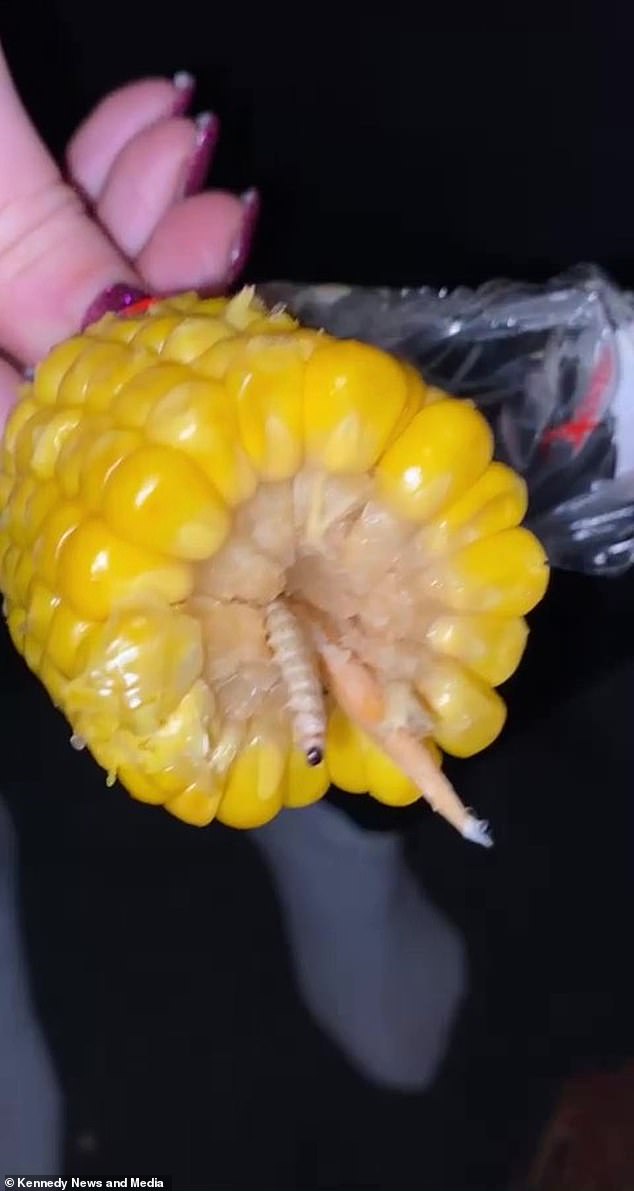 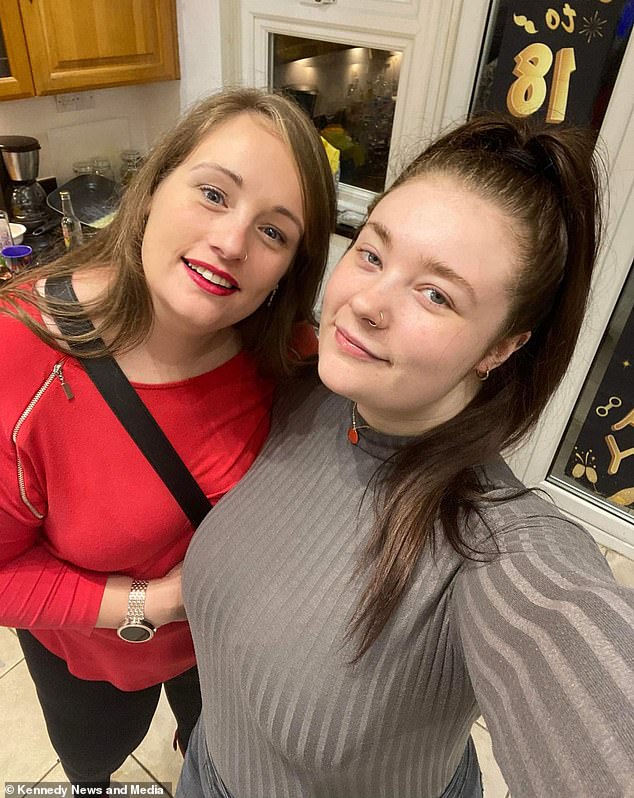 Mum Keeley Trundley, 38, with daughter Kayleigh-Ann Pearson, 21, (right), both from Bromley in Kent, on the night they found the grub

Keeley slides what they thought was a worm out of the food using a paper towel as Kayleigh-Ann can be heard groaning in disgust before joking ‘what a lovely birthday surprise, Jamie’.

The mum-of-five Keeley has revealed the £43 order from Bromley KFC, Kent, left the whole family feeling queasy for the rest of the night.

Kayleigh-Ann explained the ‘traumatising’ incident disgusted her so much it’s put her off eating KFC for life, while her mum now refuses to eat corn on the cob completely.

Keeley compared the experience to a Bushtucker Trial from ITV’s I’m a Celebrity… Get Me Out of Here!, and later that night she tweeted KFC to sarcastically request ‘edible food’ next time. 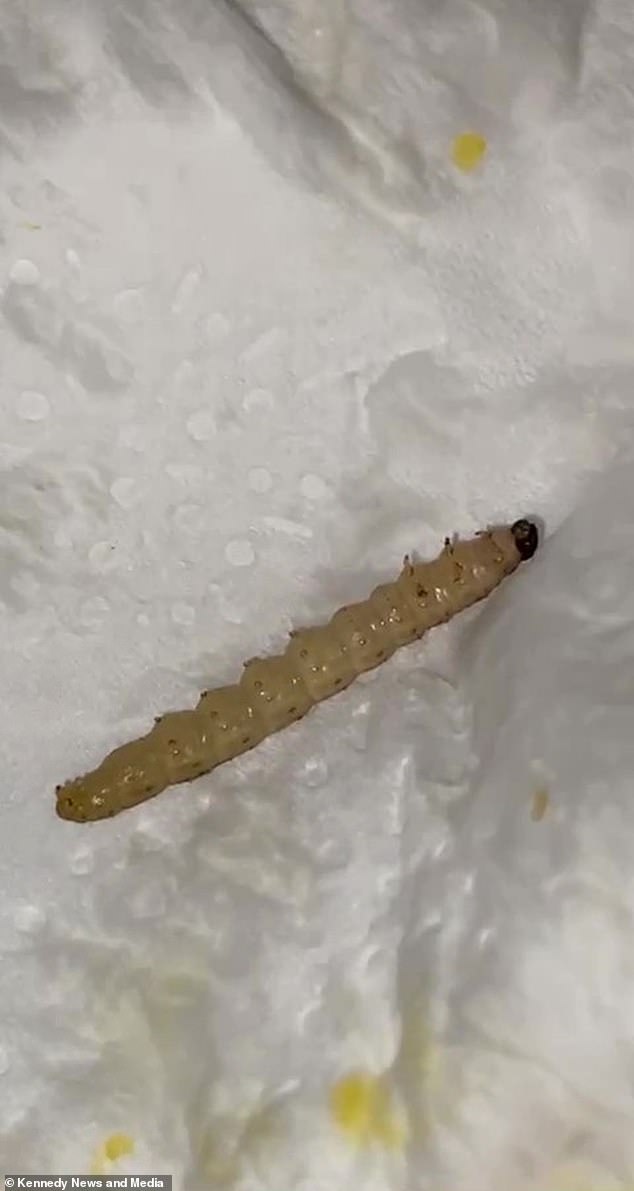 KFC have since apologised for what they claim is probably ‘a lost corn borer’ putting the family off their food and have pledged to reach out to Keeley to ‘make things right’.

Kayleigh-Ann-Ann said: ‘I went to take a bite of this corn and I just knew something wasn’t right. It was hollow in the middle but usually it’s quite hard and you take the corn off.

‘I spat it back out into the box straight away. I automatically thought it was rotten but the worm must have eaten it. 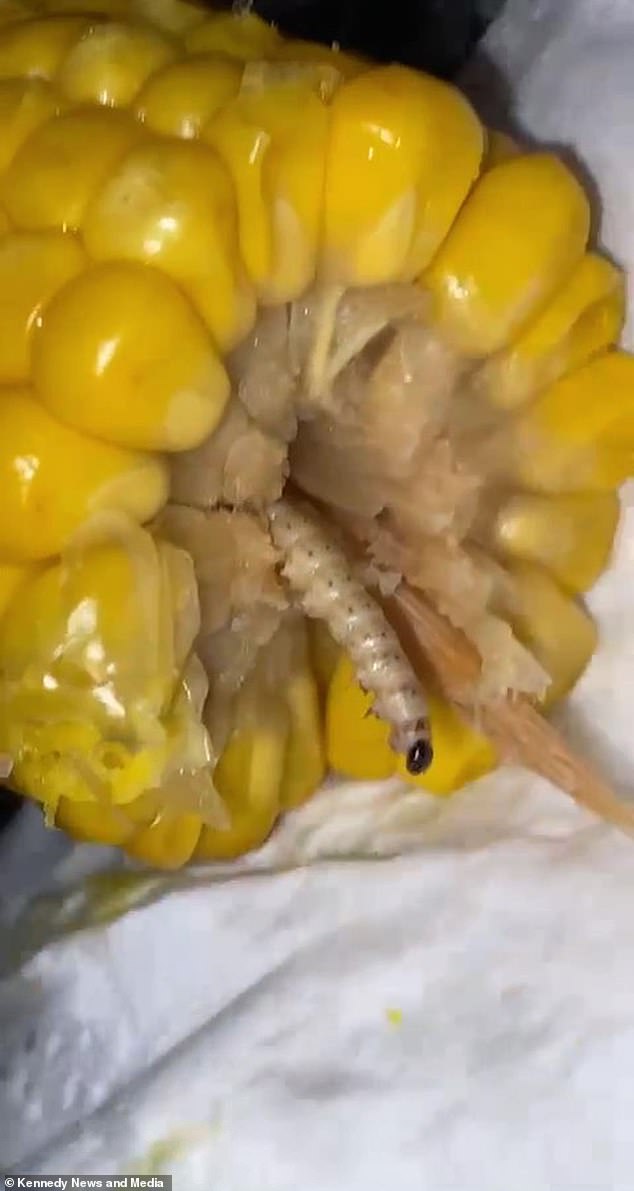 Keeley compared the experience to a Bushtucker Trial from ITV’s I’m a Celebrity… Get Me Out of Here!, and later that night she tweeted KFC to sarcastically request ‘edible food’ next time

‘I wouldn’t touch it because I was so disgusted. I couldn’t believe it. I did think it was moving at one point but no, it was dead.

‘For the whole night I kept saying I thought I had a worm stuck in my throat because it was quite traumatising.’

‘I’m never eating KFC again and I’ll only be eating sweet corn from a tin or frozen sweetcorn. I won’t be eating it off the cob any more.’ 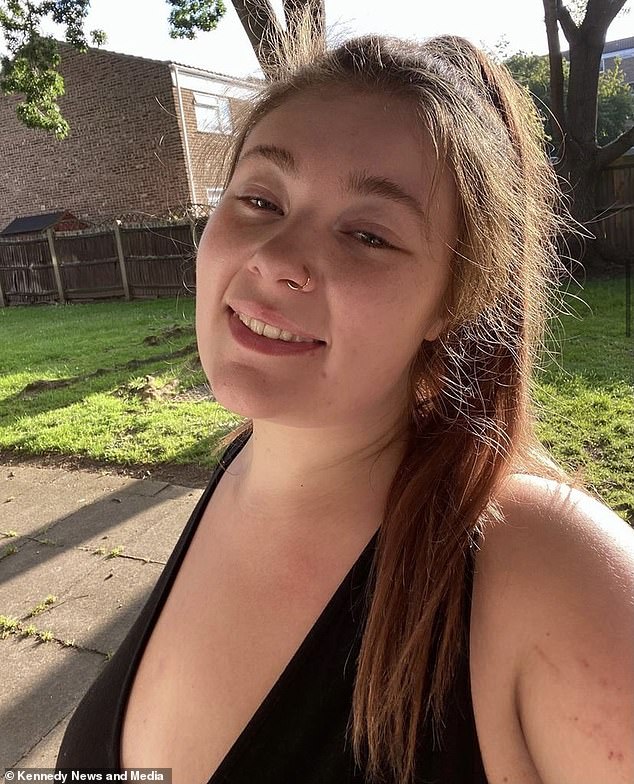 The family usually go out for birthday meals, but Kayleigh-Ann’s brother, Jamie, had requested to order a KFC so they ordered through Just Eat.

Keeley Trundely took to twitter to complain about the food her daughter received from chicken chain, KFC

She says the family usually go out for birthday meals, but Jamie had requested to order a KFC so they ordered through Just Eat.

The mum of five has since expressed her disappointment at the ‘sickening’ find as she’d been looking forward to the ‘rare opportunity’ to have a meal with all her children.

‘It was a bit like a Bushtucker Trial. I felt sick for hours after it,’ said Keeley.

‘Kayleigh-Ann bit into the corn and instantly spat it back out. She said that something’s not right and it was a bit hollow. 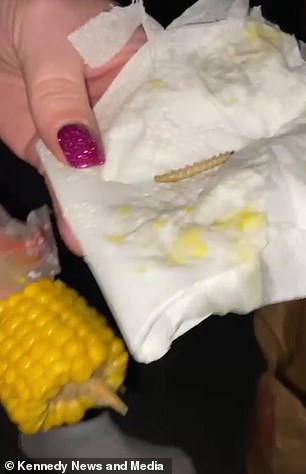 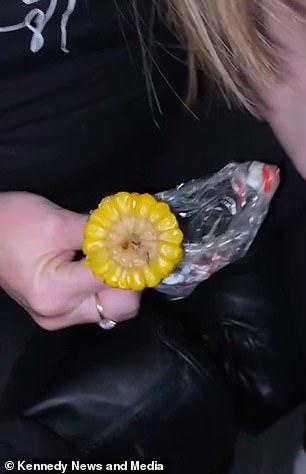 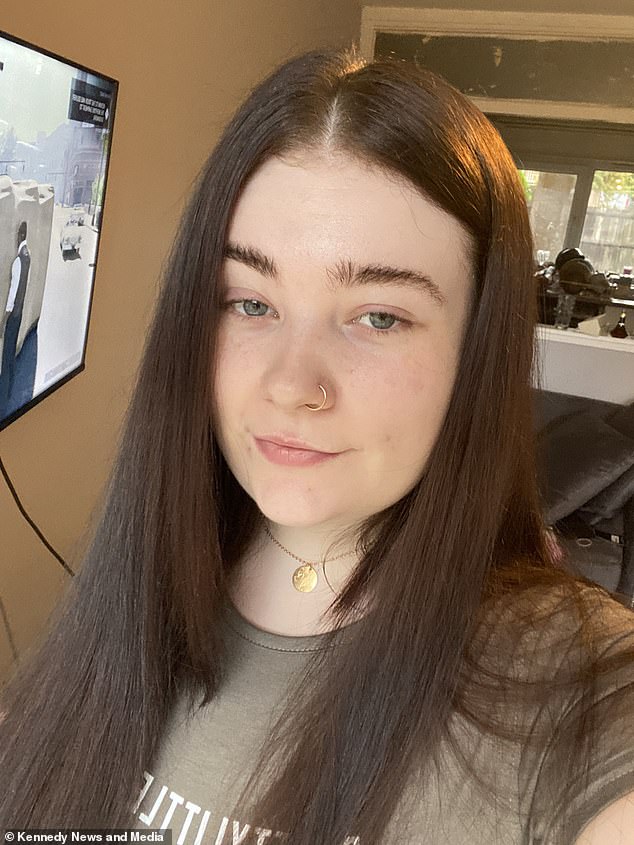 ‘Because the front room light had been turned off, she put her flashlight on her phone and said ‘oh my god is it a worm?’ but everyone just said ‘don’t be silly’.

‘I didn’t believe her and told her to stop being so dramatic, because she can be.

‘When she said she thinks it is, she passed it over to me and we filmed the video because it was definitely a worm. She just kept gagging.

‘Once Kayleigh-Ann found that, the others refused to eat their corn. They wouldn’t even open it. 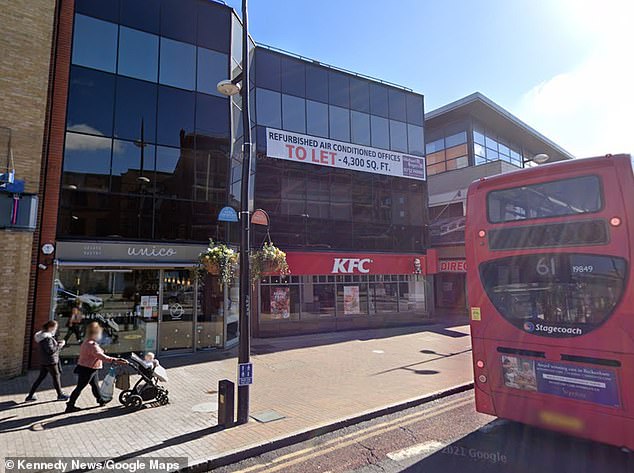 KFC in Bromley, Kent, where the infested corn on the cob came from. KFC asked Keeley to contact them via direct message, but she claimed she then did not heard from them since she provided her order details on November 17th

‘I knew she hadn’t eaten any of that worm because I could see the head, but I did worry in case she’d eaten another one.

‘I’d like to say it’s not put me off KFC because it was only in the corn, but for the time being when anyone mentions KFC I’m just going to associate it with the worm.

‘It’ll be months before I can order one again, maybe even a year or more. It’s put me off corn on the cob from anywhere – even at home now.’

‘I’m just glad it wasn’t one of the younger children because they probably would have eaten it. We all felt queasy because Kayleigh-Ann went around showing everyone. 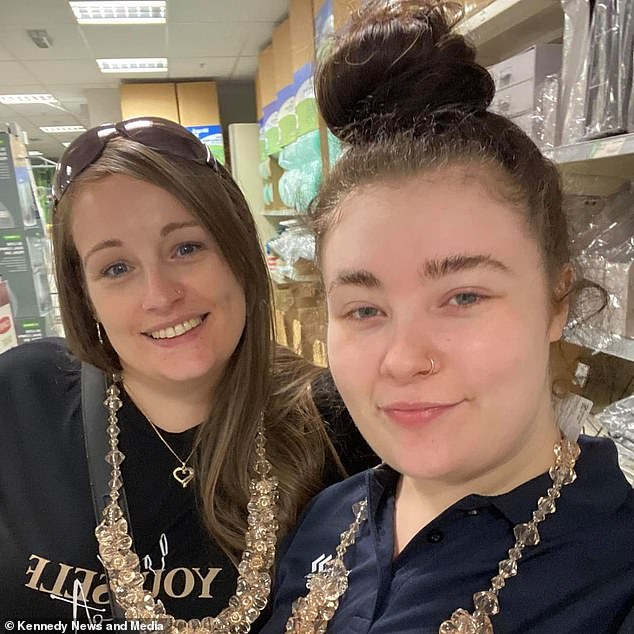 The mum and daughter duo the night they found the grub, which Kayleigh-Ann has described as traumatising 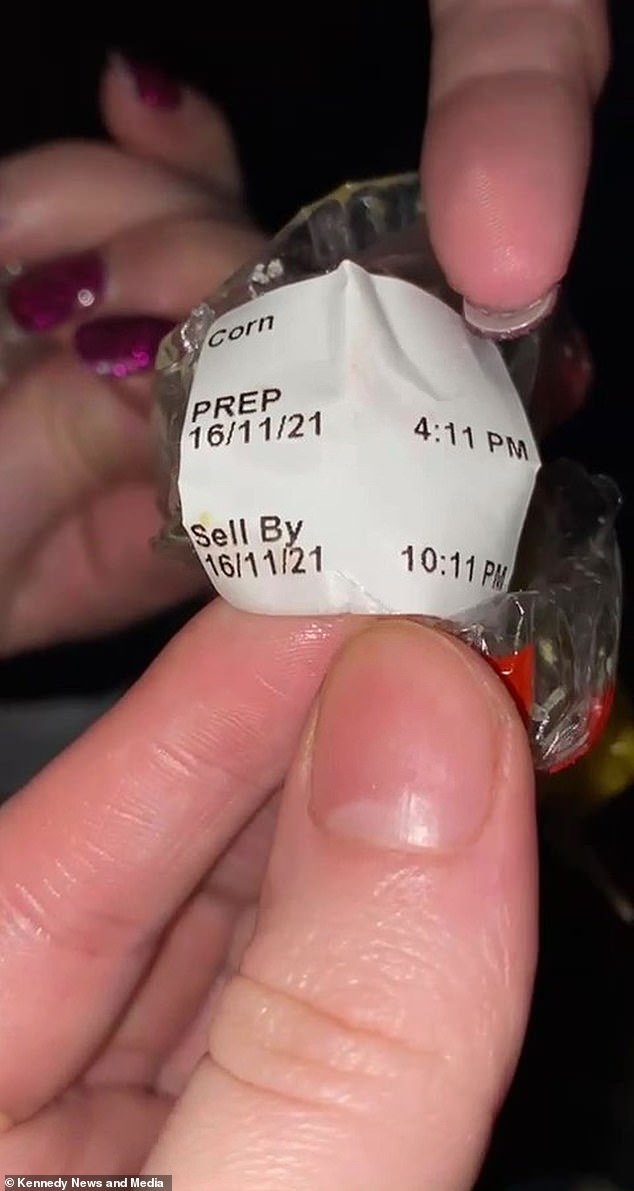 Mum Keeley Trundley, 38, holding the order details, the family were disgusted by what they found inn the corn

‘It was nice of KFC to give us a free gift, but next time it would be great if it was just a burger. I’ve tried to make a bit of a joke about it.

‘Thankfully, we’d already eaten the rest of the meal, because I don’t think we’d have ended up eating it at all otherwise.’

The family’s order included two zinger box meals with two hot wings, including a corn cob each, one zinger burger meal, one fillet burger meal and one filet box meal, with another cob in it.

Keeley’s post to Twitter said: ‘As much as I appreciate the gift for my sons 18th today, I’d prefer proper edible food in future.’ 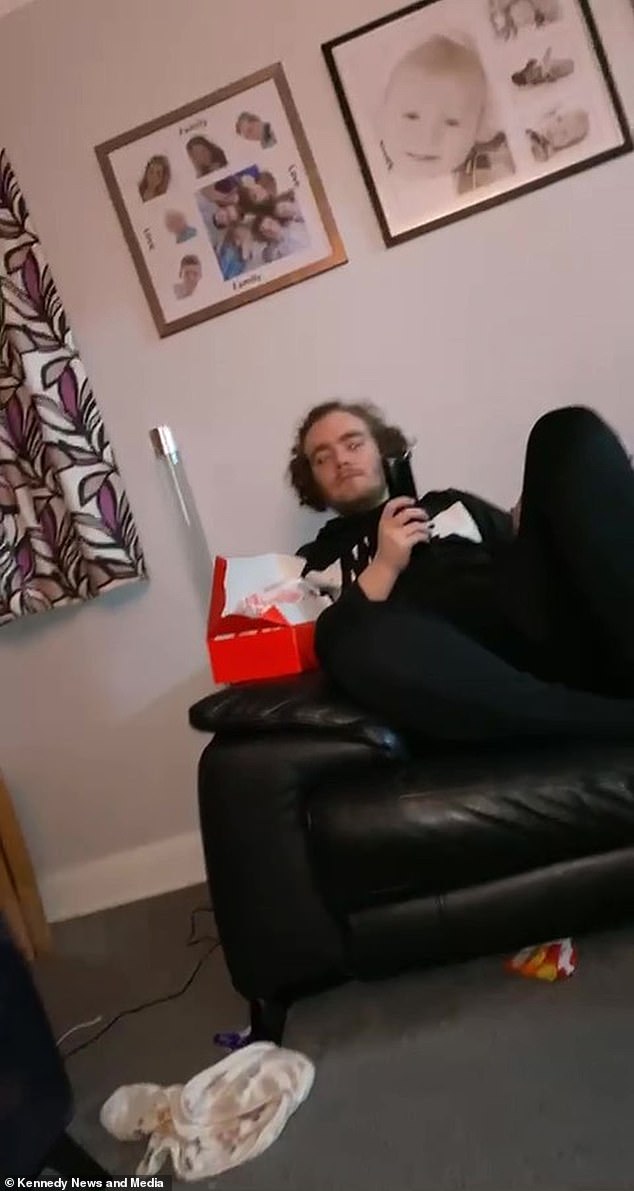 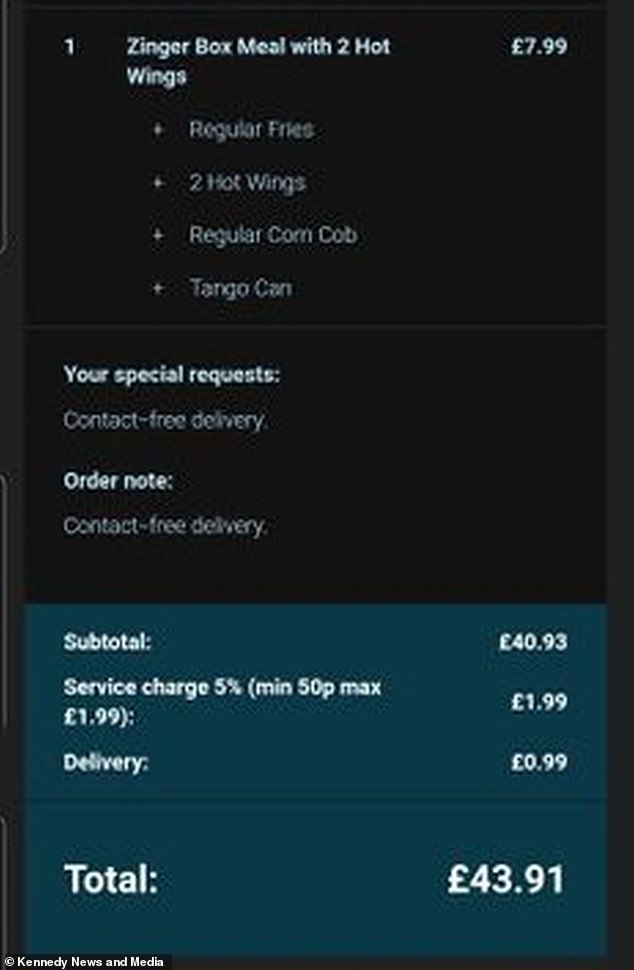 A screen grab of the Uber Eats order that included two zinger box meals with two hot wings, including a corn cob each, one zinger burger meal, one fillet burger meal and one filet box meal, with another cob in it

KFC asked her to contact them via direct message, but she claimed she then did not heard from them since she provided her order details on November 17th.

Keeley said: ‘KFC hasn’t got back to me at all since I messaged them. They said they were sorry to hear I found it and asked for some details.

‘I sent them the receipt so they could look into it but they’ve not even read that.

‘I’m not sure what I want them to do about it. When I spotted it the first thing I thought was to tweet about it. It would be nice to get a refund.’

A KFC Spokesperson said: ‘Oh dear, this little guy looks like a lost corn borer which can sometimes happen when dealing with fresh, natural produce.

‘We’re sorry our guests were put off their meal and it goes without saying it shouldn’t be there. Whilst it’s harmless, we know it’s not appealing so we’re reaching out to Keeley to make things right.’

Just Eat declined to comment but Keeley has subsequently been given a refund by Just Eat.