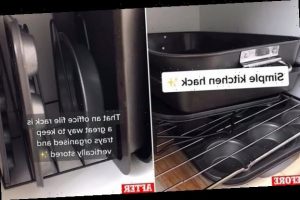 An Australian mother-of-two has revealed an alternative way to neatly store baking trays so they are easy to access and remove, and homeowners love her simple idea.

Posting a short video on TikTok, the Melbourne woman said she uses a $7 office rack from Kmart to place the items vertically in the cupboard for easy access.

‘Did you know that an office rack is a great way to keep trays organised and vertically stored?’ the woman said in the video.

Since publishing the video on October 2, the hack has gone viral and received more than 50,000 views. 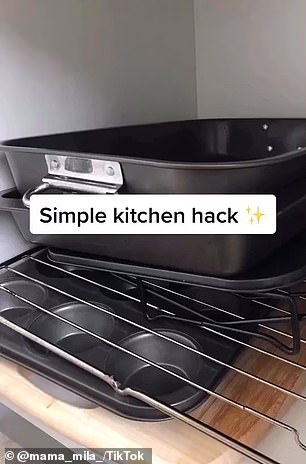 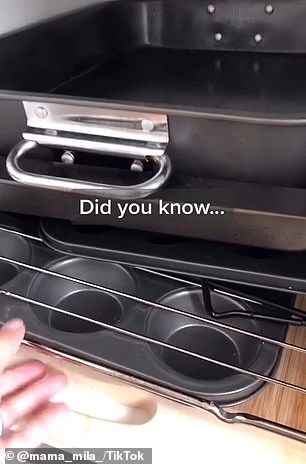 Rather than stacking the trays on top of each other, the simple hack allows each tray to be removed without the need to shuffle or move others around.

Others praised the woman for sharing the savvy kitchen hack, with many tagging their friends to share the idea further.

‘You have answered my prayers!’ one person said.

‘Where have you been all my life? This is a game changer’ another said.

A third added: ‘I’ve been looking for a way to organise my baking stuff.’ 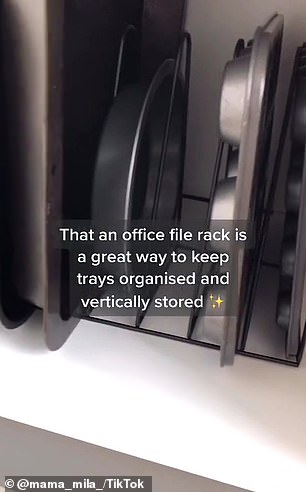 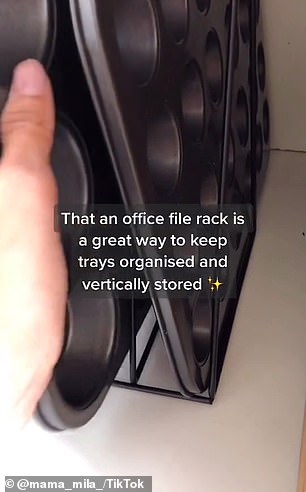 Posting a short video on TikTok , the woman used a $7 office rack from Kmart to place the items vertically for easy access

And this isn’t the first insightful video the woman has shared that has gone viral, she has also revealed how to deep clean your sink and mattress using natural products.

To clean the sink the mum first used baking soda and vinegar, which are commonly used to clean home appliances, as well as two unlikely ingredients to maintain the shine – lemon and baby oil.

‘So easy you can do it while waiting for your dinner to cook,’ she said in the caption of another TikTok video.

‘Deep clean your sink using natural products you already have.’

END_OF_DOCUMENT_TOKEN_TO_BE_REPLACED

END_OF_DOCUMENT_TOKEN_TO_BE_REPLACED
We and our partners use cookies on this site to improve our service, perform analytics, personalize advertising, measure advertising performance, and remember website preferences.Ok