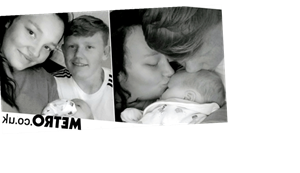 Summer Nash, 17, was fully prepared to have the baby boy four different doctors had told her she’d deliver.

She had picked out the name Hugo-James, bought bottles, dummies, and personalised items for her baby boy, and told loved ones to expect a new, male, arrival.

So she and her partner Hayden Shea, 18, were stunned to have a baby girl instead, after – we repeat – doctors had told Summer four times that she was having a boy.

Summer had previously had two scans at the hospital, at 12 weeks and 20 weeks, both confirming the happy couple was expecting a boy.

They had another scan at Hello Baby in St Helens, Merseyside and a growth scan, where again the couple were told they were having a boy.

Summer, from Rhyl, said: ‘At every scan, I was told I was expecting a boy.

‘I had a private scan because we wanted to plan everything for our first baby together.

‘When we found out we were having a little boy we were over the moon because Hayden wanted a little boy.

‘We were shown everything, including the “boy parts”. Every scan we went to they showed us.

‘I did question it quite a lot, to be honest.

‘Hayden’s mum Fiona said “imagine if you end up having a girl?”, as we had found some pink tinges on our pram.

‘The fur we wanted was sold out and the only colour they had was pink.’

Summer went into the hospital on 24 June. She was induced and didn’t give birth until 26 June at 2.45pm.

After being in active labour for five and a half hours, they had a huge surprise when a baby girl arrived instead of the boy they were expecting.

Summer said: ‘The midwives in the hospital wrote all the boy tags out and then when I actually had her, she needed some help as she stopped breathing and needed oxygen.

‘They then came over and said “are you sure it is a boy? As you’ve given birth to a little girl”.

‘I was speechless and I didn’t believe them, neither did Hayden. I made him go over to double-check.

Summer said she and Hayden were not disappointed by the arrival of their new daughter but, understandably, had their hearts set on a boy.

She said: ‘We’d got that bond with our little boy for it then to turn out to be a girl.

‘I found it hard to bond at first but I couldn’t say she wasn’t mine because I watched her come out.

‘We then went on to tell the family and no one believed us. They made us send a picture.

‘It was difficult for the first few days of getting used to a girl and adjusting to my new life as a mum.’

And of course, giving birth during the coronavirus pandemic had its own challenges.

‘As she was born during a pandemic it affects everything,’ said Summer.

‘I couldn’t have my partner there until I was 4cm dilated, which took two days.

‘I also couldn’t have any family there which was quite sad and I had bad anxiety.

‘The nurses and doctors didn’t really explain why but they said it is very rare for this to happen.’

But after all the challenges and the shock, the couple are now very happy to be home with their daughter – who makes everything worth it.

‘We look back now and we laugh but it still very disheartening,’ Summer added.

‘But I wouldn’t change my little girl for the world and I love being a mum.’

END_OF_DOCUMENT_TOKEN_TO_BE_REPLACED

END_OF_DOCUMENT_TOKEN_TO_BE_REPLACED
We and our partners use cookies on this site to improve our service, perform analytics, personalize advertising, measure advertising performance, and remember website preferences.Ok