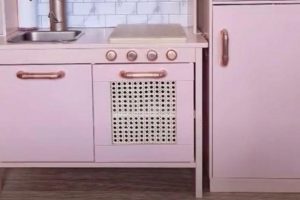 A mum has given her daughter the best birthday present of all after building her a modern kitchen playset.

She upcycled an old Ikea toy kitchen and a Kmart wooden playset after she bought them second-hand from Facebook Marketplace.

Jackie and her fiancé, from Australia, removed the fridge from an old playset and gave the Ikea kitchen an "industrial chic" makeover.

Speaking in her TikTok clip, the mum said: "We hacked an Ikea play kitchen to a functional kitchen.

"So we chopped the fridge off of a Kmart kitchen.

"We primed and painted it, added rattan to the oven and microwave, added the water pump, soap dispenser and running water."

The couple used peel and stick marble-looking tiles from Kmart to create the splashback.

Jackie bought the water dispenser from eBay to create a functional sink with a 4-litre jar so it doesn't overflow.

She wanted to add a water feature to the kitchen for her daughter to play with while learning how to wash.

"It's an electric water dispenser that has a tube in a jar feeding it water and the sink drains into another jar," Jackie explained.

She told Daily Mail Australia: "I fell in love with the Montessori idea of a functional kitchen that would teach Arya practical tasks of washing her hands.

"I also wanted her to use the sink to cut up her own fruits rather than make believe because kids build up confidence and skills when they can do something for real that they watch their parents do on their own."