BALTIMORE — Growing up in Baltimore, 16-year-old Keith Fleming had to make a choice. By fifth grade, he knew he wanted to avoid a path that would lead to trouble. Instead, he chose to be part of a year-round music program called OrchKids, run by the Baltimore Symphony Orchestra.

Fleming, who plays tuba, was one of just 30 kids in the program when it started 10 years ago. It has since grown to include 1,300 students, with a year-long waiting list.

“I just stuck to it because opportunities came,” he said. 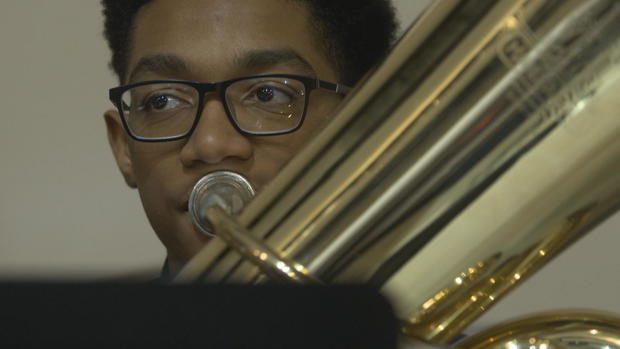 He also got the opportunity to travel to places like London and Austria. But he’s not the only musician at the dinner table. All three of his siblings are in OrchKids too. His 17-year old sister, Desha plays the cello.

“I’m very proud because I never thought I could do this. So knowing that I could make something come out of that instrument is just, like, everything,” she said.

“Many people who grew up in Baltimore never leave their neighborhood. But our students leave every week and that opportunity is going to take them places,” she said.

For Keith Fleming, his talent has taken him to the highly selective Baltimore School for the Arts.

“Without OrchKids I can’t see what path I would’ve took or, like, where I would’ve ended up,” Fleming said.

Now that’s the sound of success.