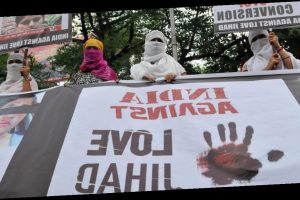 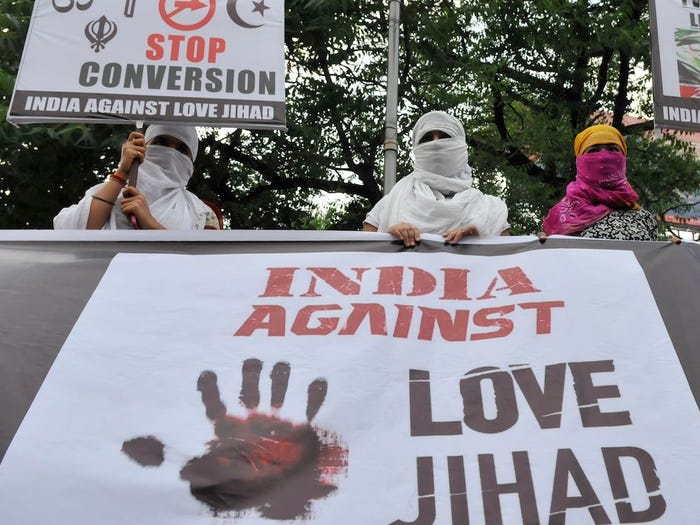 'Love jihad' is a term used by radical Hindu groups to accuse Muslim men of trying to trick non-Muslim women into converting to Islam.

This conspiracy theory has been used to justify a new law in the Indian state of Uttar Pradesh. The ordinance, which the state's governor approved at the end of November, forbids unlawful religious conversion. It's referred to by Indian media as the 'love jihad law.'

Those who are deemed to have unlawfully converted someone through marriage or other means can now face up to 10 years in jail.

Since the passing of the law, numerous Muslim men have been arrested for allegedly breaching it. Often, these men have simply partaken in consensual interfaith wedding ceremonies.

Fears exist that the law is being used by the ruling Bharatiya Janata Party (BJP) to target Muslims, according to The Guardian.

Uttar Pradesh, the most populous state in India, is home to 40 million Muslims.

Under the law, the first arrest accuses a Muslim man, Owais Ahmad, of reportedly "coercing, coaxing, and alluring" a Hindu woman into eloping with him and converting to Islam. She has since married a Hindu man, and Ahmad claims to have "no link with the woman." Nonetheless, he was sentenced to 14 days of judicial custody, according to the Indian newspaper Scroll.

The day later,  an interfaith wedding between a Hindu bride and Muslim groom was stopped right before the wedding rituals. The couple agreed to postpone the wedding, according to the Bangalore Mirror.

Ali remains in jail, charged with forcibly converting his Hindu wife, despite his wife denying these accusations. A video clip went viral of the 22-year-old woman telling members of Bajrang Dal that she was a consenting adult and married the man freely.

This week, a marriage between two Muslims was stopped by police after an extremist Hindu group tipped them off. A 39-year-old man, Haider Ali, was kept in police custody overnight and was reportedly tortured, reports The Indian Express.

The 'love jihad' conspiracy theory has circulated online for several years. It first gained public attention in 2009, according to The Times of India.

In September, it gained steam after a video of a Hindu woman being gunned down by a Muslim man went viral. The victim's family rejected that this was an example of 'love jihad,' according to the Independent. Nonetheless, protests erupted.

In the same month, Uttar Pradesh's right-wing chief minister asked officials to formulate a strategy to "prevent religious conversions in the name of love." Yogi Adityanath signaled that he was willing to legislate in a bid to prevent love jihad, The Hindu newspaper reported.

On November 28, an ordinance was approved by Uttar Pradesh's government.

It is the first of at least five states led by the BJP to introduce such a law.

END_OF_DOCUMENT_TOKEN_TO_BE_REPLACED

END_OF_DOCUMENT_TOKEN_TO_BE_REPLACED
We and our partners use cookies on this site to improve our service, perform analytics, personalize advertising, measure advertising performance, and remember website preferences.Ok