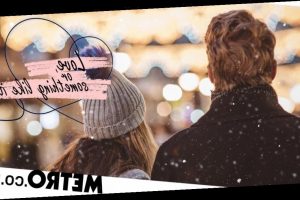 I know exactly where I was standing when my boyfriend called me and told me he had been unfaithful: just outside a train station and beside a bin.

‘I think you know what I’m going to say’, he began, which seemed particularly unfair, as though it was up to me to work it out. Then he told me he had slept with someone else.

I had never been cheated on before, at least not that I was aware of. If I had been, I was glad that I never knew because by the time I finally hung up the phone, I could barely breathe.

I was deeply in love with my boyfriend, and thought he was deeply In love with me; the pain was so overwhelming I wanted to climb out of my skin. I was on my way to my mum’s house, a journey I have made hundreds of times, but in those first few moments I couldn’t remember the way.

I did (and still do) count myself lucky that we had only been together for a matter of months when he cheated. I can’t imagine how much harder it must be to find out about infidelity from a partner of years, decades – from a husband or wife around who you have built an entire life.

We met on a dating app and frankly I couldn’t believe my luck: after years of wrong relationships, bad dates and being the only single one out of my mates, he was the most fun, most generous, most-similar-to-me man I had ever met. Miraculously, he liked me too.

We seemed to be perfectly matched, from the things that don’t matter (we laughed at the same TV shows! We both liked soup!) to the big things that do (the way we thought about family, our political leanings, wanting children).

There had been red flags – inconsistencies in his story, dates that didn’t add up – and I had ignored them all. I wanted so badly to finally be in love, one half of a pair. Yes, he lied, but I knew something was wrong and I stayed. So what does that say about me?

Shamefully, I had openly judged friends who went back to cheating boyfriends

After his cheating came out, there was nothing to do but split up – but being apart was hellish. I drank myself to blackout often, took up smoking and tried to work and date and exercise myself out of the trauma. I confided in friends and they were supportive, but I didn’t know how to explain that as much as I hated him, I missed him, too.

It wasn’t long before I snapped and sent him a message. I wanted answers and resolution but confusingly, humiliatingly, I also wanted him back.

I had always claimed that cheating would be an immovable red line for me, and that I valued my own welfare and dignity more than any man. Shamefully, I had openly judged friends who went back to cheating boyfriends. Now here I was in the same situation, squaring up to the idea that love, true love, was messy, and heartbreaking, and anything but finite.

We started to talk in secret, then started to see each other until we were essentially a couple again. Of the people we told, no one thought it was a good idea and at times, I had doubts, too. But when I was with him, it felt like coming home.

We went for counselling, which was my stipulation of us getting back together. At times it felt surreal: two thirty-somethings already in couple’s counselling before our relationship was a year old.

Mostly, it just felt safe, a place where we could say the most honest things – the things we worried would make the other leave. As the sessions wore on, I realised that the deceit and gaslighting hurt more than any of the sordid details. Being denied the chance to make my own decision, based on all the facts – that was the worst thing.

Our therapist encouraged me to see the part I had played in the situation, and that helped more than anything. Some unlucky souls are completely blindsided by infidelity but I wasn’t. I was complicit. Understanding that helped me to process what had happened, and to forgive.

For something so commonplace, infidelity seems to be the last taboo when it comes to love

The trust came back easily once everything – every last detail – was out in the open. My boyfriend sought help for substance abuse and the ‘rigorous honesty’ he was bound by as a result gave me reassurance until I learned that that part of his life was to help him, not me. I started to take responsibility for the decision I was making to stay. It was – it is – oddly empowering.

It helps that we have never made the cheating a taboo topic. We talk about it with the same ease with which we discuss what to have for dinner, though we rarely need to these days. It’s as much a part of our story as the holidays we have since taken, the dinners with friends (who have, almost without exception, come around) and the in-jokes we share. If I bring it up, it’s because I am feeling insecure not angry, and he listens for as long as I need. Sometimes he apologises – again – but I don’t need him to.

For something so commonplace, infidelity seems to be the last taboo when it comes to love. A YouGov study from 2015 reveals that one in five British adults have had an affair (and those are the ones who will admit to it) while research published in Science Direct in 2017 lists infidelity as the most common cause of divorce.

Yet still it is hushed up, buried, something to run from but never explored. In my experience, it is survivable and, if brought into the open, it can be an opportunity to dig out and discard the root causes that led to it happening in the first place.

My boyfriend and I have made our relationship work through a combination of honesty and forgiveness, both of each other and ourselves, as well as deep love for one another. We’ve had incredibly difficult conversations in which we have both openly wondered whether continuing was right but I know I will stay with him unless it becomes untenable to do so.

I have no concern he will cheat on me again, which is not to say it’s not a possibility. I could also cheat on him. We could get married and be happy for decades before staggering into infidelity again. Accepting this as fact rather than fighting against it, and knowing that I have the strength and resilience to deal with it should it happen, has brought me peace and security.

We have chosen what feels right for us, and I now know that no one has the right to judgement when they are on the outside looking in.

I thought that true love, when I found it, would announce itself by being easy and unquestionable, but that’s the Instagram-filtered version.

It can be just as complex as the ‘situationships’ and not-quite-love I’ve endured and hated. It’s a myth to say that true love isn’t work, but it’s work worth doing.

Last week in Love, Or Something Like It: I had an arranged marriage and have grown to love my husband

Love, Or Something Like It is a regular series for Metro.co.uk, covering everything from mating and dating to lust and loss, to find out what love is and how to find it in the present day. If you have a love story to share, email [email protected]

END_OF_DOCUMENT_TOKEN_TO_BE_REPLACED

END_OF_DOCUMENT_TOKEN_TO_BE_REPLACED
We and our partners use cookies on this site to improve our service, perform analytics, personalize advertising, measure advertising performance, and remember website preferences.Ok