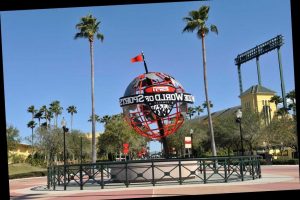 It seems like some NBA players are taking coronavirus precautions very seriously in Orlando.

According to Sham Charania of The Athletic, there have been "multiple" calls to a hotline the NBA set up to anonymously report social-distancing violations at the NBA bubble at the Walt Disney World resort, where 22 teams are currently preparing to restart the season on July 31.

"Some players have received warnings from violations, sources said, as league ensures social distancing and mask protocols on campus," Charania reported on Tuesday of the calls, made to what has become known as the "snitch hotline."

The NBA did not immediately respond to PEOPLE's request for comment.

While inside the Disney World campus, players are not allowed to visit each other's hotel rooms but can socialize under restrictions. According to The Ringer, after teams arrived last week, players were immediately quarantined in their hotel rooms for 36 to 48 hours until they tested negative for coronavirus twice.

Yet, two players — Richaun Holmes and Bruno Caboclo — were placed in quarantine a second time after breaking rules, according to ESPN.

Holmes, who plays for the Sacramento Kings, crossed quarantine lines to pick up a food delivery, he said in a statement. His mother playfully teased him for breaking quarantine in a post to Twitter.

"You only cross the line for your MOMA’s COOKING! AND I WAS NOT IN FLORIDA SIR!!" she wrote. "Love you baby!"

Brooklyn Nets player Spencer Dinwiddie, who has opted out of the NBA's restart after testing positive for coronavirus, offered some advice to his peers over in Orlando earlier this week.

"To all my fellow NBA players, don't call the snitch hotline. Don't cross the line to get Postmates," Dinwiddie told Taylor Rooks of Bleacher Report.

There is a small but growing group of NBA players and staff that have also chosen to sit out the rest of the season — including Los Angeles Lakers player Avery Bradley — due to safety concerns. Rockets' player Thabo Sefolosha opted out of the restart after playing 41 games for the team this season.

And this week, Rockets star Russell Westbrook announced he recently tested positive for coronavirus and is waiting to be cleared to join the team in Orlando.

As information about the coronavirus pandemic rapidly changes, PEOPLE is committed to providing the most recent data in our coverage. Some of the information in this story may have changed after publication. For the latest on COVID-19, readers are encouraged to use online resources from CDC, WHO, and local public health departments. PEOPLE has partnered with GoFundMe to raise money for the COVID-19 Relief Fund, a GoFundMe.org fundraiser to support everything from frontline responders to families in need, as well as organizations helping communities. For more information or to donate, click here.