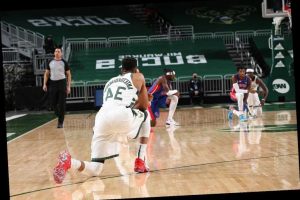 Several NBA teams kneeled in protest as part of the Take a Knee movement hours after pro-Donald Trump rioters entered the U.S. Capitol building, causing destruction and interrupting the certification of the Electoral College's votes following the 2020 presidential election.

On Wednesday night, players showed their support for the Black Lives Matter movement following the unrest at the Capitol, which saw Trump supporters break into and vandalize the building as Congress met to certify Joe Biden as the next president of the United States.

Ahead of their game, the Miami Heat and Boston Celtics released a joint statement explaining that they were moving forward with the matchup with a "heavy heart" following recent events, including Tuesday's news that the Wisconsin police officer who shot Jacob Blake several times in front of three of his children will not face criminal charges in the shooting.

"2021 is a new year, but some things have not changed," the teams said in their message, as reported by NBA.com. "We play tonight's game with a heavy heart after yesterday's decision in Kenosha, and knowing that protesters in our nation's capital are treated differently by political leaders depending on what side of certain issues they are on." "The drastic difference between the way protesters this past spring and summer were treated and the encouragement given to today's protestors who acted illegally just shows how much more work we have to do," the statement continued. "We have decided to play tonight's game to try to bring joy into people's lives. But we must not forget the injustices in our society, and we will continue to use our voices and our platform to highlight these issues and do everything we can to work for a more equal and just America."

As their game began, members of the Detroit Pistons and Milwaukee Bucks took turnovers on their first possessions with all players kneeling on the court.

"We want to do things to help make change, be on the right side of the fight, continue to fight, not be in any way, shape or form distracted or slowed or moved in the wrong direction," Bucks head coach Mike Budenholzer told the AP. "We need to keep moving forward in all ways, shapes and forms."

Other teams that participated in kneeling or displays of unity included the Phoenix Suns, Toronto Raptors, Golden State Warriors, and L.A. Clippers. Philadelphia 76ers head coach Doc Rivers — whose team faced the Washington Wizards on Wednesday — said the events at the Capitol were especially painful for Black Americans.

"The symbolism of storming the Capitol without force done to them, if you're a Black American, it definitely touches you in a different way," Rivers said. "This is not a Black thing. This is an American thing."