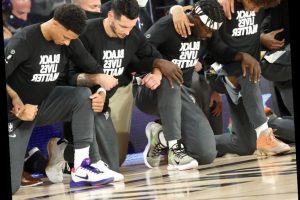 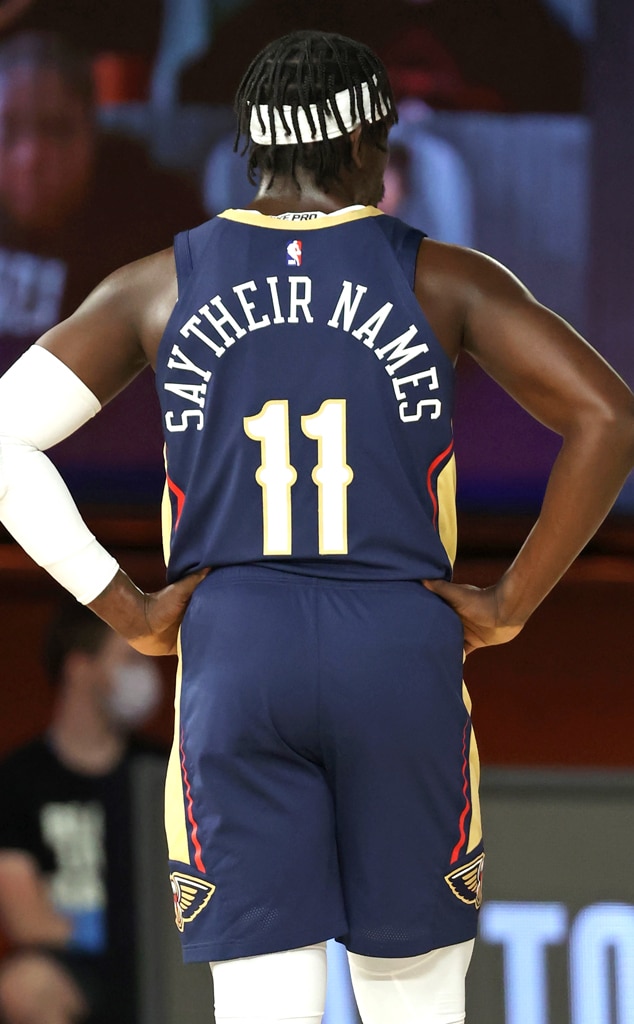 The NBA is making a big impression with the official restart of the 2020 season.

On Thursday, July 30, the Utah Jazz and New Orleans Pelicans came together before their game to take a knee during the national anthem in honor of the Black Lives Matter movement. The players from both teams wore a shirt with "Black Lives Matter" emblazoned across the front, as they wrapped arms around each other's shoulders.

Additionally, the players replaced their last names on their jerseys with a chosen phrase or word they associate with the social justice movement. One athlete chose, "Say their names."

In a statement, the New Orleans Pelicans voiced their support for the "ideals of freedom of speech and the right to peacefully protest."

"Collectively with the Utah Jazz, our organization joins the NBA in supporting our players and coaches," the statement continued. "To promote meaningful change relative to social justice and racial equality, the New Orleans have partnered with our players, staff and coaches to create a Social Justice Leadership Alliance committed to furthering the discussion, listening and learning and taking action to make positive change in our community and country."

Similarly, the Utah Jazz team said in their own statement, "We are a values-based organization and believe in the foundational principles of justice, equality, fairness and economic empowerment. Our organization strives to be a unifying force in our communities, and we hope this time in our history can be a catalyst for positive change in a country we love."

Ellen DeGeneres Discusses Workplace Complaints in Letter to Her Staff

Taylor Swift Responds to Accusations of "Stealing" Her folklore Logo

This is just the first of many games to be played in the Walt Disney World "bubble" in Orlando, Fla.

Players from 22 of the 30 NBA teams began to quarantine in the Walt Disney World Resort nearly a month ago and subsequently partook in frequent tests for COVID-19 as they prepared for tonight. Everyone living in the bubble has been subjected to strict guidelines and rules in order to ensure the safety of all.

Notably, Utah Jazz player Rudy Gobert, who was the first NBA athlete to test positive for the novel virus, played in tonight's game.