NCAA apologizes for disparities between women’s and men’s facilities 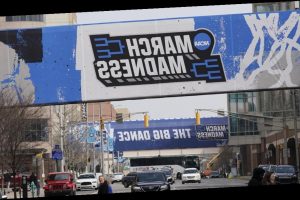 The NCAA is promising to bring better resources to the Women’s Division I Basketball Tournament after videos and images of the women’s facilities sparked outrage among fans and athletes online. Ahead of March Madness, student-athletes and coaches shared comparisons between the men’s training facilities and a single rack of dumbbells and one stationary bike for the women.

The NCAA initially blamed the lack of space and vowed to improve the conditions. Lynn Holzman, the NCAA’s women’s basketball VP, said the plan was to provide more space and equipment to teams that further advanced in the tournament.

“We want to be responsive to the needs of our participating teams, and we are actively working to enhance existing resources at practice courts, including additional weight training equipment,” Holzman said in a statement Thursday.

Ali Kershner, the sports performance coach for Stanford University’s women’s basketball team, posted photos of the amenities provided to the women’s team, writing “In a year defined by a fight for equality, this is a chance to have a conversation and get better.”

Oregon forward Sedona Prince wasn’t convinced and shared a video of extra space in the arena. “It’s 2021 and we’re still fighting for bits and pieces of equality,” Prince captioned the video. “If you aren’t upset about this problem,” Prince added, “then you are apart of it.”

In a call with administrators, NCAA Senior Basketball VP Dan Gavitt said the organization would do better in addressing the disparities between their men and women’s leagues. “What we pull together in months and years, we tried to do in weeks and days,” Gavitt added. “That’s meant some shortcomings. I apologize and feel terrible about anything that falls short of our lofty expectations.

WNBA star Sabrina Ionescu, last year’s NCAA player of the year, shared an image of the men’s room which appeared to be better-equipped. “Thought this was a joke,” she tweeted.

The different food options were also ridiculed online, along with the difference in gift bags handed out to players.

Strict COVID-19 guidelines will make this year’s games look and feel very different. There is a virtual safety bubble at both tournaments— and only six sites in and around Indianapolis are hosting the games, with each venue limited to no more than 25% capacity, which includes teams, support staff, families, and the limited amount of fans allowed to attend.