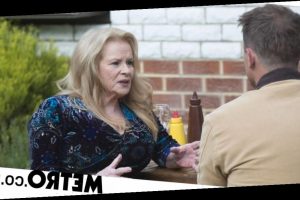 Sheila is about to realise that keeping secrets will always come back and bite you hard as her revelation regarding Levi is set to rip a big hole in the Canning family – and while Colette Mann, who plays her, reckons that the clan will get through this, she accepts that it could be a hard battle for her alter ego to explain herself.

The actress told Metro.co.uk: ‘Oh well it splits the family for a while because he leaves and he won’t come and he’s trying to find somewhere else to live. Kyle didn’t know any of this of course, so he’s horrified and so he feels he’s stuck in the middle, because Sheila and Levi are fighting and Kyle finds it difficult!

‘Like all good soap operas though it all comes out in the wash and we do all get back together again!

‘Levi is there, where else is he going to live, all of the other houses are taken. I was happy with the way they handled it and then Richie and I did a lot of talking about it.

‘She’s overcompensating and he finds that really difficult as well and so there’s a few false starts of the family getting back together again if you know what I mean as she’s feeling guilty and smothering him. So it didn’t all fix itself immediately, which I was pleased about!’

So how does the secret of the robbery come to light?

Colette explained: ‘Mainly because she’s been talking to Clive about it and he says to her, you need to tell him before he finds out from somebody else, and then she’s having trouble telling Levi, she tries a couple of times and then when Levi starts his monologue about what a fantastic grandmother Sheila is and how she’s always looked after him for all of his life, it’s too much for her, so she just blurts it out in true Sheila fashion!’

And it’s safe to say it doesn’t go down well – be prepared for the most awkward of BBQs!

Join the community by leaving a comment below and stay updated on all things soaps at our homepage.