MILAN — Not all revolutions come amid bedlam. Sometimes all it takes is a 30-second trailer to seed a long-due change in the perception of a country.

“Being invisible is the real power” is one of the quotes that stands out in the trailer of the new Italian original series “Zero,” which premieres on Netflix on Wednesday in 190 countries.

A punchy quote per se, it has an even stronger impact when the viewer realizes the superhero uttering it has no mask nor fancy costumes but is a Black Italian boy. Not only is he the protagonist of the show, he is joined by a cast almost entirely made up of Black Italian youths.

So “Zero” is a superhero fiction series — a rare film genre in Italy’s TV and movie offer — but, most importantly, it marks the first time the country has produced a show centered around the lives of Black youths, creating a long-overdue precedent for wider representation in the nation’s film scene.

It’s not a coincidence the series is being showcased on Netflix, a platform that has proven its ability to identify new local voices and bring rarely explored worlds to a global audience. For Italy’s younger generations especially, the platform represents a way out from the clichés often depicted on traditional TV channels, which don’t really mirror the multifaceted reality they experience or their taste in fashion and music.

All of the Fashion at the 2021 BAFTA Awards

Yet it would be reductive to frame “Zero” only around its unprecedented casting choice. While shedding a light on the challenges and dreams of a second generation of immigrants and life in the suburbs, the series promises to voice concerns and treat themes that are current and universal: friendship, love, integration and a sense of community are all part of the narrative, therefore making “Zero” potentially appealing for all younger generations, regardless of their origins.

All the more reason why fashion should monitor the eight-episode show and its reception, not only to further acknowledge the seismic shift in local culture but also to eventually tap fresh faces that can better engage with younger customers. Incidentally, Netflix stars and fashion brands have already made for well-tested pairings, with examples ranging from actresses of the “Baby” series Benedetta Porcaroli and Alice Pagani, a regular at Gucci shows in the past and an Emporio Armani face, respectively, as well as “Élite” actress and Bulgari ambassador Ester Expósito, to name a few.

“I think this can be a beginning, a little window through which other projects of representation in today’s Italy can pass,” said writer Antonio Dikele Distefano, upon whose idea “Zero” is based. “It goes beyond the Black skin. It’s about precisely narrating Italy in 2021, something that media don’t do. They show Italy as it was 25 years ago, while my goal is to narrate as it is in 2021.”

He lamented the media’s lack of representation in Italy, which is “simply due to the fact that those who have the opportunity to bring these stories to TV always say that ‘we are not ready’ or ‘there are no people who can tell these stories.’ But this is not true. All it takes is to just look around or enter a school.”

Therefore, Dikele Distefano’s goal was to make sure these stories and people existed. “When you exist, you put the others in front of a choice: either to continue not telling your story or to do it.…From April 21 these people will exist and the choice goes back to those who take decisions within the media. I hope they will choose to show Italy for what it is.” 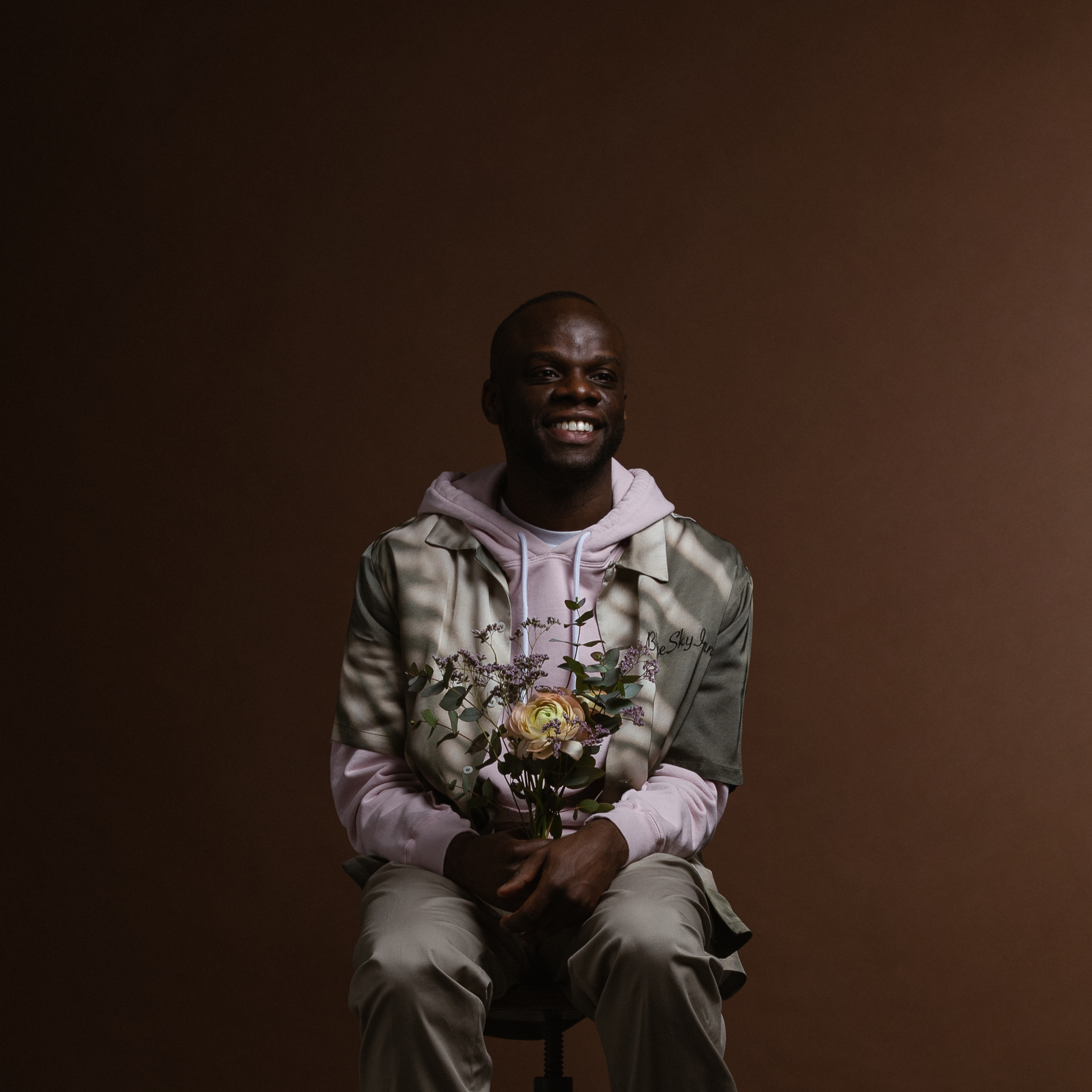 A 28-year-old writer born in Italy from Angolan parents, Dikele Distefano is the author of the 2018 book “Non ho mai avuto la mia età,” or “I have never had my age” in English, which inspired the series.

In writing the show, he was joined by Stefano Voltaggio, Massimo Vavassori, Carolina Cavalli and Lisandro Monaco and especially by screenwriter Roberto Marchionni, best known as Menotti, who (not coincidentally) penned the 2015 Italian superhero action movie “They Call Me Jeeg” that was one of the country’s most convincing experiments in the genre.

The series is produced by Fabula Pictures — which was also behind the “Baby” drama about teen prostitution in Rome — with the participation of Red Joint Film. 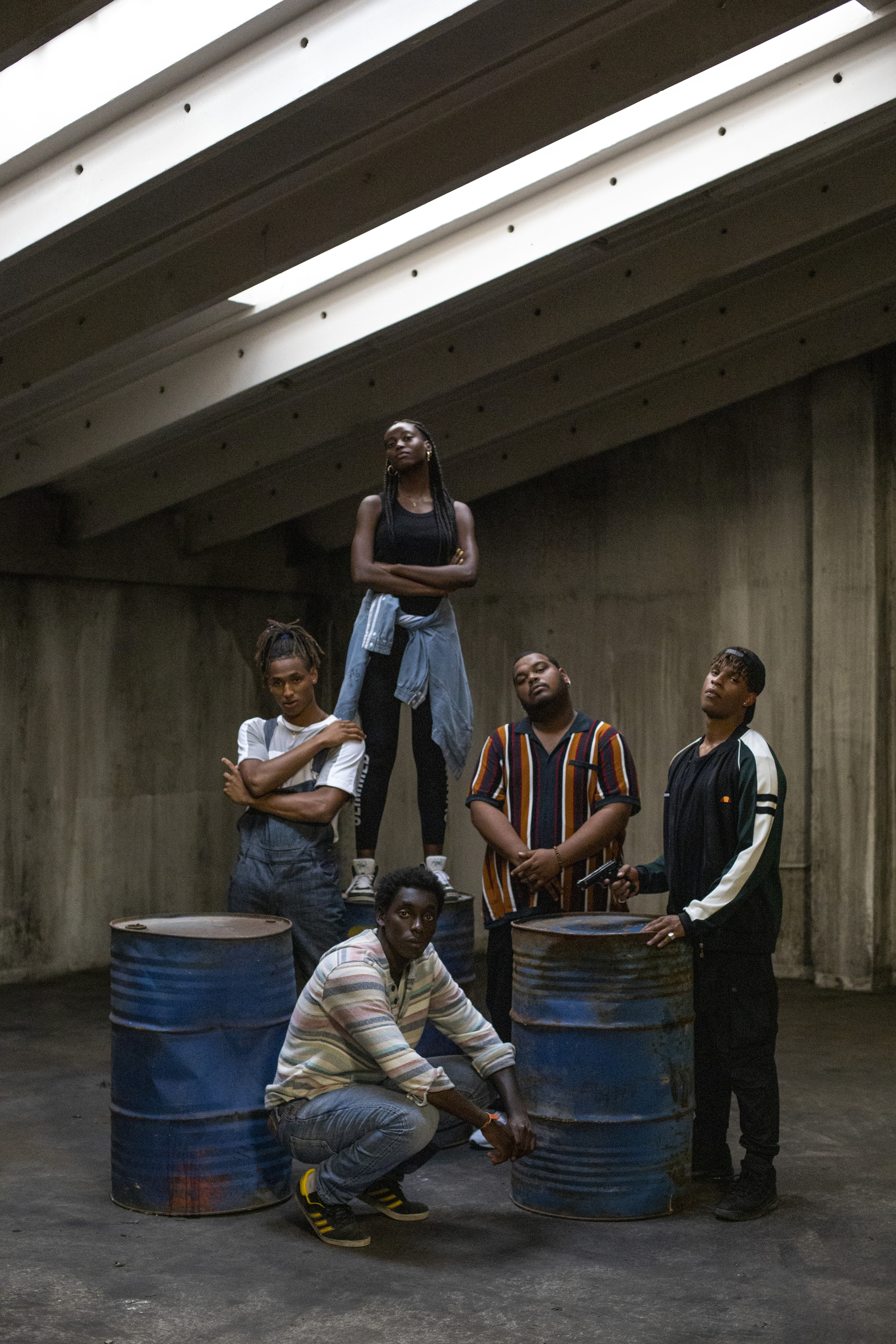 “I already knew who Antonio [Dikele Distefano] was and his previous work, and I learned about this project through a casting call video he posted on YouTube,” said Fall, who was among the first to be hired as the co-protagonist of the show. In particular, it’s Fall’s character that tasks the shy Zero with the mission of saving the Barrio, the district in the Milan suburbs where the protagonist lives and which he wants to escape.

The on-screen friendship between Sharif and Zero reflects the bond the two actors created in real life, which was strengthened by having interacted for the longest time on set last year. Overall, the whole cast got along well — with Fall finding also a romantic partner in actress Scattolin — sharing the exceptional experience of living together in a hotel for three months due to the pandemic.

“It was such a familiar dimension, like one I never experienced in my previous productions,” said Fall. “We knew what we were doing was important for its artistic and social value…we had a common goal, and we all felt this big responsibility, which we faced with so much happiness and strong commitment to do our best.” 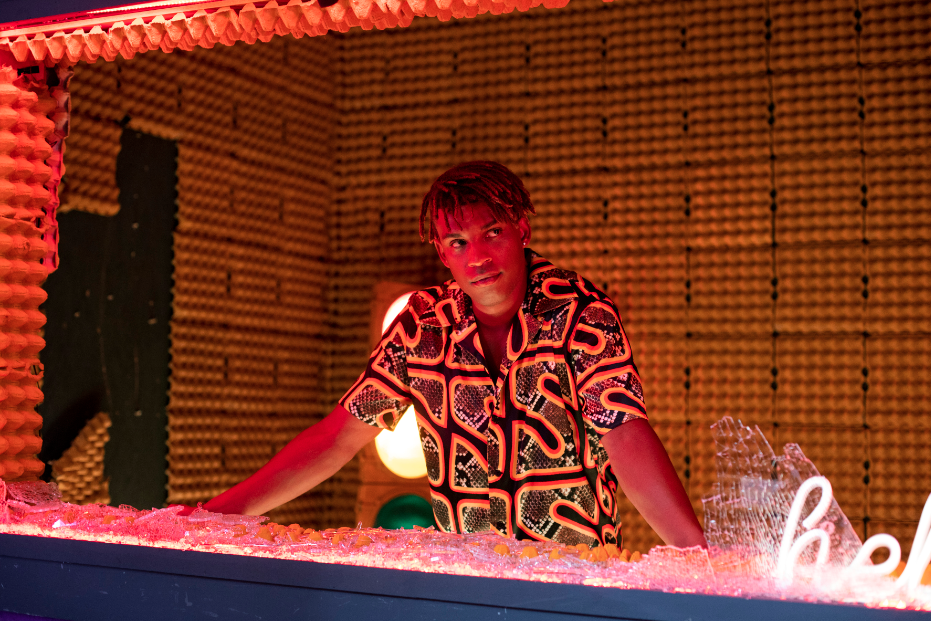 Fall described Sharif as a young boy struggling between his African roots and Italian culture. “He feels this enormous need for redemption: Like all the young, second-generation folks he wants to escape from the place he was born and grew up in, he wants to turn around his life. But his problem is that he doesn’t know how to do it, so he comes up with different ways.…He is smart but he can’t find his collocation in society, as many Italian youths do in this moment,” said the actor.

Fall noted he shares Sharif’s impulsiveness, tenacity and dynamism, while a point of difference is “the grudge he holds: He is resentful for his social condition and family situation, but I don’t feel that way for what happened in my life.”

A 25-year-old raised in Turin, Fall has been involved with acting since he was a little boy, as his adoptive family decided to treat his hyperactivity with drama therapy. In theater, Fall found a habitat to freely express himself and subsequently enrolled in Turin’s Fondazione Teatro Nuovo as a teenager.

“Then, I auditioned and I was accepted at the Bernstein School of Musical Theater in Bologna, but I knew that musicals don’t work here, so I declined and took a risk, applying to other schools in Rome,” recalled Fall. He eventually joined the Centro Sperimentale di Cinematografia, becoming the third Black actor in the 86-year-long history of the school.

“There’s an expression that guides me: ‘Black people always have to prove to be good twice: One time to prove they are able to do what all the others can do and one to fight their prejudice.’ And this stuck with me, I worked the hardest I could and tried to be always very prepared in my life,” said Fall.

Yet when asked about the challenges encountered in his work so far and the overall limited opportunities for Black actors in Italy, the actor didn’t address the media but the country’s social heritage.

“It’s complex, there are historical and social reasons behind it. Often cinema represents reality, and in the past we didn’t have Black people covering social roles, so we have never seen these kind of characters in movies. We are the first generation actually integrated in the Italian social tissue.…The fact that we have studied in this country, eaten its food, learned its language paradoxically gave us the opportunity to be considered equal for the first time,” said Fall, who hopes that this series could induce a collective social and cultural reflection and bring about a positive change.

“I don’t know how the public will react to the show, we are living in a very polarizing era: people never say ‘I didn’t like this thing, but I liked this other,’ but it’s always [either] ‘beautiful’ or ‘it sucks,’ so I don’t know what to expect,” added Dikele Distefano. “I have learned that the best audience is the silent one, the people who don’t tell you what they think, but who watch your work. And in any case, when there is criticism, it’s always OK because it means that something has been elicited.”

For the writer the true purpose of the show is having “elementary and middle school kids finally able to say ‘here is a series with characters that look like me, at last’ and that maybe the next carnival choose to dress like Zero, with that specific tank top he wears.” 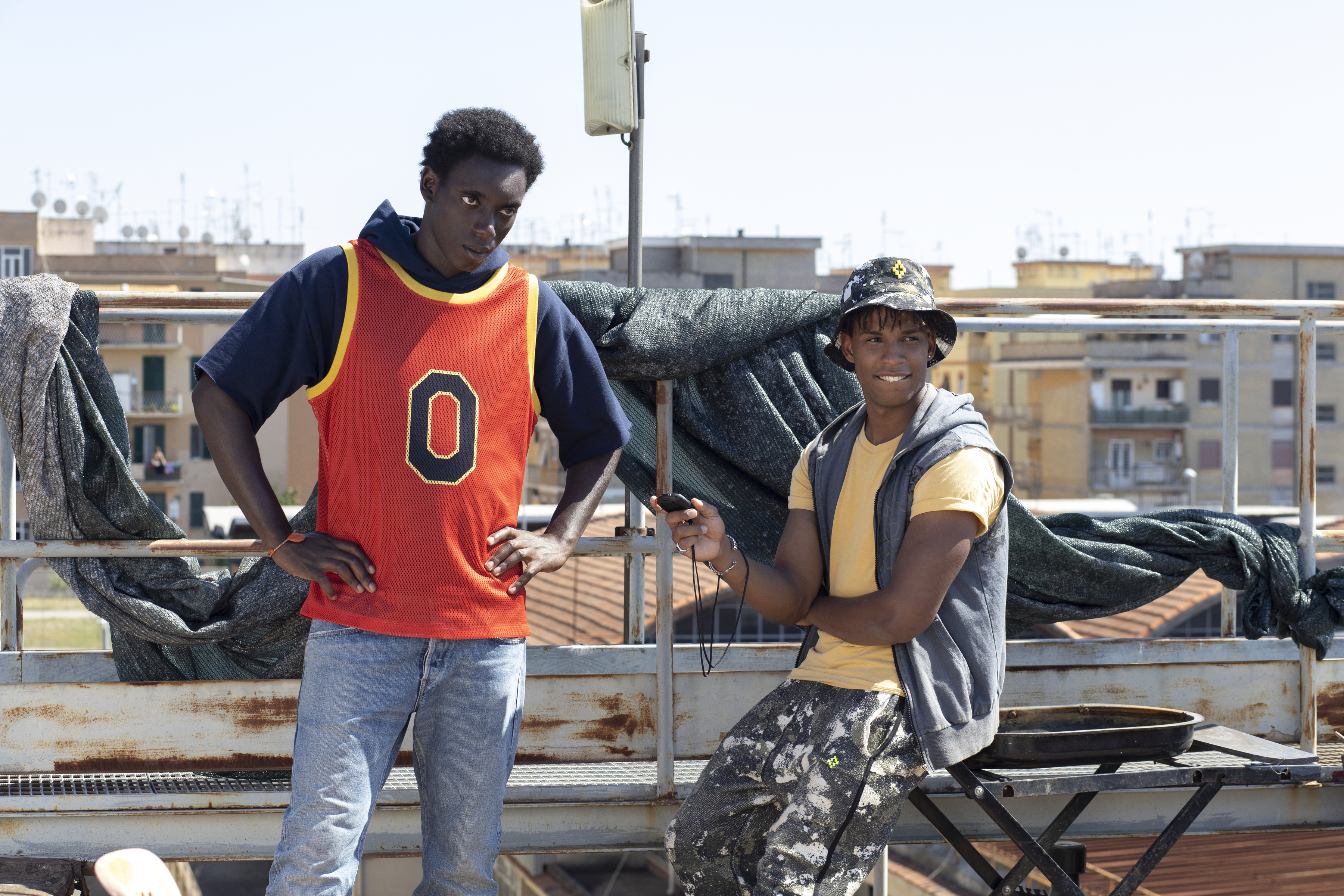 The show’s soundtrack will also play a key role in resonating with young people, with Dikele Distefano opting for rap music as it is “the language of my generation.”

Local music stars have contributed to the project, comprising Italian rapper Marracash as well as Mahmood, who rose to international popularity after he placed second representing Italy at the 2019 Eurovision Song Contest with a song about his upbringing, marked by his Egyptian father abandoning him when he was a child. Ever since, Mahmood has become one of the best examples of cultural integration, representing a fresher and more inclusive image of the country abroad. This increasingly caught the attention of fashion brands, too, including Burberry, which tapped him for a handful of campaigns.

A fashion enthusiast himself, Fall revealed he was particularly keen on Virgil Abloh and Alessandro Michele, and sees fashion “as another form of art and of self-expression that deserves the utmost respect,” while in his work he looks up to Denzel Washington, Jamie Foxx and especially Michael B. Jordan, who embodies the ideal career path he would like to follow.

While he will soon start shooting his new project — the Italian movie “La classe migliore [The best class],” an adaptation of a theater piece he worked on in the past — Fall’s ultimate mission is to give back “the kindness I have received from my adoptive family and good fortune I had in life” by helping other people to change and improve their lives.

“If the chance is given to people, there’s so much talent out there. So it would be great to be able to help others through my work, empowering them to become actors, too,” he concluded.