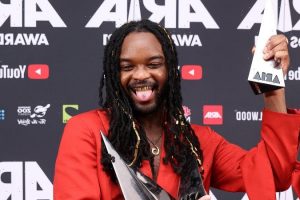 It’s admittedly weird to feel proud of the ARIA Awards, our annual music industry showcase for whatever Paul Kelly or Midnight Oil or Hilltop Hoods happen to be doing each year. But this week’s awards ceremony was one we should all get behind.

While some bemoaned the bare-bones production of Wednesday’s pandemic-afflicted ceremony – a tiny online-only broadcast from Taronga Zoo that, at least on YouTube, topped out at about just 2000 viewers at any one time – it at least offered a solid appraisal of local music’s exciting young talent. 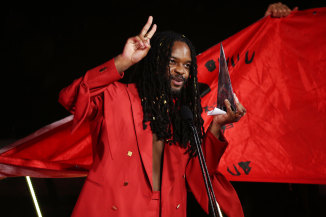 The celebration of genres such as hip-hop and R&B that the ARIAs has traditionally overlooked – they were only given specified categories two years ago (before 2019 hip-hop and R&B artists were lumped into the best urban album and best urban release categories) – and especially among the awards’ major categories is a welcome step forward for the local music industry.

Even more significant is the overdue recognition of the extent to which Indigenous and first- and second-generation Australians of African and Pasifika descent have had in expanding those genres – both culturally and sonically – in Australia, and in attracting an international spotlight to the local scenes.

As Owusu-Ansah recently told me after leading this year’s nominations: “I’ve never really made music that I thought would be recognised at this level by an institution like the ARIAs, but I guess it just signifies a changing of the times, a changing of the culture, a changing of the guard. It’s definitely gotten to a place where it can’t be ignored.”

The ARIAs’ progressive momentum was only further underscored by this week’s baffling Grammy nominations in the US, which included an album of the year nod for 95-year-old crooner Tony Bennett’s latest duet thing with Lady Gaga, a record of the year nomination for recently reunited pop-fossils ABBA, and a wild field-leading 11 nominations for jazz traditionalist, Disney composer and Stephen Colbert sidekick Jon Batiste. 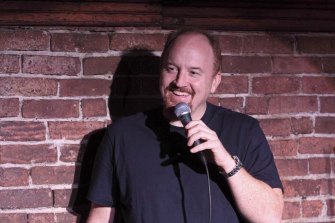 Disgraced stand-up Louis CK will be up for a Grammy Award at February’s ceremony.

Based on the Grammy nominations, you’d also surmise that rock is, quite literally, dead. Alongside nods for sprightly young upstarts AC/DC, Paul McCartney and Foo Fighters, the best rock album category featured a nomination for Chris Cornell, who died in 2017. To be fair, I guess it is impressive to strum a power chord from beyond the grave.

For what’s ostensibly the world’s most prestigious music awards – the awards that, like the Oscars, function as a historical barometer of what the culture most valued in music each year – it’s all pretty embarrassing. If this really represents the best music of 2021, I’m ready for the monsters from A Quiet Place to attack.

Perhaps more egregious than its dearth of taste, though, is the Grammy Academy’s defence of its more offensive nominations, which included a best comedy album nod for self-confessed sex pest Louis CK and multiple potential wins for Marilyn Manson (thanks to his co-credit on Kanye West’s Donda and Jail), who’s currently the subject of various sexual assault lawsuits. (Another divisive nomination for comedian Dave Chappelle in the best spoken word category was at least for his George Floyd-referencing 8:46 special, and not his recent controversial Netflix special).

After some criticism, Grammys chief executive Harvey Mason Jr defended the Recording Academy’s choices by saying, “We won’t look back at people’s history, we won’t look at their criminal record, we won’t look at anything other than the legality within our rules of, is this recording for this work eligible based on date and other criteria. If it is, they can submit for consideration.”

It’s a strange line in the sand. To borrow a line from Joe Strummer, “If Adolf Hitler flew in today, they’d send a limousine anyway.”

Contrasted with the Grammys’ bungling of its never-ending controversies – which last year also included allegations of “rigging, favouritism and racism” leading to reforms around its voting processes, plus claims of sexual harassment from ousted former boss Deborah Dugan – the organisers of the ARIAs deserve some praise.

Last month ARIA stripped former Sony Music boss Dennis Handlin of an icon award he’d received in 2014, after allegations about a toxic workplace environment at the label while he was its chief executive. Handlin – once a regular fixture of the ARIAs ceremony, both in presence and in (apparently mandated) acceptance speech thank yous – was absent and ignored from this year’s ceremony.

Unlike the Grammys, it seems ARIAs organisers have an understanding that major institutions, even if they’re just toasting the local state of music, have a responsibility around what they celebrate and what it contributes to the wider culture.

With all due respect to Tony Bennett (that Rags to Riches scene in Goodfellas is a work of art) and the ghost of Chris Cornell, I’d rather a world where an ambitious and exciting work from a young Ghanaian-Australian rapper is deservedly recognised as the musical jewel of the year. Never thought I’d say it, but: well played, ARIAs. Finally.