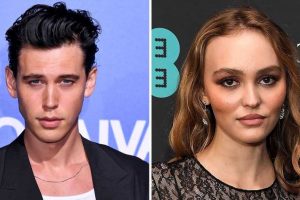 Summer love! Lily-Rose Depp and Austin Butler packed on the PDA during a night out in London, leading fans to wonder if a new romance is brewing.

In photos obtained by the Daily Mail, the Voyagers star, 22, shared a passionate kiss with the Shannara Chronicles alum, 29, after enjoying a dinner date in London on Sunday, August 8. Depp paired her jeans and black jacket with a Chanel bag, while Butler opted for a similarly casual look.

In one snap, the duo leaned against the wall while waiting for their cab and snuck in a few more kisses and hugs. In another, the Once Upon a Time in Hollywood star put his arm around the actress while they went for a stroll.

Though this is the first time the twosome have been romantically linked, they worked together on the 2016 movie Yoga Hosers, which also starred the model’s father, Johnny Depp, in a small role.

Lily previously dated Timothée Chalamet, whom she met while filming the Netflix movie The King. The pair called it quits in April 2020 after more than one year of dating. Earlier this year, they sparked reconciliation rumors after they were spotted together in New York City, but neither party ever confirmed the news.

Vanessa Hudgens and Austin Butler: The Way They Were

“The value of privacy is something that’s been instilled in me from an early age,” the Chanel spokesmodel told Drew Barrymore in April. “Growing up in a family like I did, it was always something that was … I always learned the importance of privacy and valuing that and keeping things just for yourself. And so that’s something that I’ve carried on into my own career and that’s really important to me.”

Butler, for his part, was previously in a relationship with Vanessa Hudgens. The former couple split in January 2020 after nearly nine years together. “Vanessa and Austin are officially broken up, and Vanessa has been telling those close to her about their breakup,” an insider told Us Weekly at the time.

Two years before their split, the High School Musical alum, 32, sparked rumors that she and Butler were engaged after she posted a selfie that showed her wearing a ring on her left finger. She later clarified that the ring’s placement was a coincidence and she just wanted to show off her haircut.

“I want to get married, travel, then have kids — probably in my late 30s,” the Princess Switch star told Women’s Health in November 2018. “Everyone’s clock is different.”

The Spring Breakers star has since moved on with Cole Tucker, to whom she was first linked in November 2020. “I got a girlfriend and she’s cool,” the baseball player, 25, told reporters in February. “She’s awesome, I love her.”