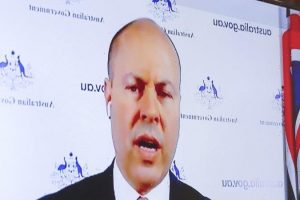 Record levels of ongoing and unfunded spending are being baked into a federal budget already running the largest deficits in history, with government debt on its way to $1 trillion.

On top of short-term government responses to the coronavirus pandemic, a series of policy initiatives around social services and defence – on top of anything promised ahead of the election – could consolidate spending at levels normally associated with sharp economic downturns or war. 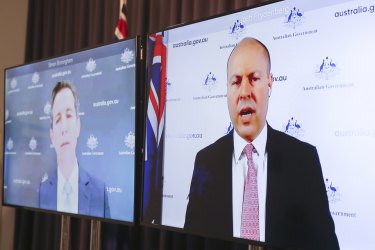 Treasurer Josh Frydenberg and Finance Minister Simon Birmingham release the final outcome for the 2020-21 budget. This year’s deficit is expected to deteriorate due to extra spending.Credit:Alex Ellinghausen

Deloitte Access Economics on Monday released its latest quarterly outlook on the economy, forecasting the recovery out of the COVID-19 pandemic had been delayed rather than derailed by recent lockdowns aimed at preventing the spread of the Delta strain of coronavirus.

It is tipping the economy to grow by 1.5 per cent in 2021-22, driven by a further lift from the mining and agriculture sectors, a lift in business investment and a 4.4 per cent step-up in public expenditure.

Growth is likely to be strongest in Tasmania and South Australia, with the NSW economy forecast to expand by 0.3 per cent and Victoria’s by 1.2 per cent.

But Deloitte director Chris Richardson said another issue beyond the recovery from the pandemic is the state of the federal budget.

He said the public sector deficit this year will be almost 2 per cent of national income higher than what is forecast by federal and state budgets combined.

“The budget isn’t bollocksed. Yes, it needs repair. But that repair isn’t due to the one-off costs of COVID crisis fighting,” he said.

“It’s needed mostly due to recent decisions to boost social spending. Those decisions were much needed, but they haven’t yet been funded. Budget repair is important for future crisis-fighting, so we’re keen to see it.”

On Sunday, the government announced it would bring forward by four months its changes to childcare subsidies which it said would benefit about 250,000 families by $2200 a year.

But the changes will add hundreds of millions in extra costs to the budget for the 2021-22 financial year. There were no offsets to the changes to pay for their overall fiscal impact. 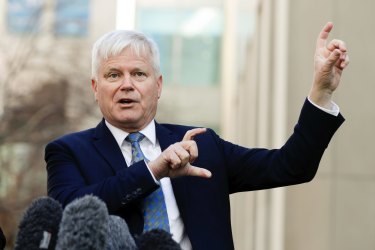 Deloitte Access Economics director Chris Richardson says long-term spending has been baked into the budget on top of the short-term assistance to deal with COVID-19.Credit:Alex Ellinghausen

That follows increased spending in areas such as aged care, JobSeeker and the recent decision to buy up to 12 nuclear-powered submarines.

After a smaller-than-expected deficit in 2020-21 of $134.2 billion, this year’s deficit – which was forecast to be $106.6 billion – is now tipped to swell beyond $120 billion due to spending required to deal with recent lockdowns.

Budget payments as a share of GDP stepped up to more than 21 per cent during the Whitlam government of the mid-1970s.

Apart from a drop in the mid-1980s, due to a change in federal assistance to the states, spending had remained between 23 and 26 per cent of GDP until the coronavirus pandemic.

Mr Richardson said another issue facing both sides of politics was the action of the Reserve Bank to protect the economy through COVID.

He said with official interest rates at 0.1 per cent, any efforts to help the economy in coming years would likely be driven by the budget rather than monetary policy.

Policy levers such as tax surcharges may become necessary, while the budget could be mired in red for years.

“While the economics of budget repair aren’t all that curly, the politics certainly are, and so the nation may be stuck with deficits for many years,” he said.

“The RBA already has its foot to the floor. For the foreseeable future, that says budget policy has to be more agile than it has been in times past because the Reserve Bank has lost most of its ability to provide short-term steering for the ship of state.”

The Money with Jess newsletter helps you budget, earn, invest and enjoy your money. Sign up to get it every Sunday.