Nick Jonas and Priyanka Chopra have been a married couple since December 2018, and it’s safe to say they get cuter and cuter by the day. From their adorable Instagram posts to their undeniable chemistry in the Jonas Brothers’ "Sucker" music video, these two seem like a match made in heaven. Seeing them on the red carpet of the 2019 Billboard Music Awards was no different. In fact, Nick Jonas and Priyanka Chopra’s body language at the 2019 BBMAs shows these lovebirds are thriving in their marriage, thank you very much.

But first, a quick backtrack. Jonas and Chopra made their first red-carpet debut together at the 2017 Met Gala, but only as friends. A year later, they sparked dating rumors when they were repeatedly spotted together in Los Angeles, Harper’s Bazaar reports. In the months following, they flirted on Instagram, reportedly met each other’s families, traveled together, and by August, Jonas and Chopra announced their engagement. They got married in December 2018, and since then, have done everything but hide their love for each other.

But sometimes, body language has the potential to reveal more about a couple than their words or actions could. I spoke with three behavior experts about what Jonas and Chopra’s body language at the BBMAs red carpet on May 1 said about them as a couple, and I wasn’t disappointed. "In addition to being remarkably good looking, they look like they are also deeply in love, have a robust and passionate sex life, and support each other’s independence," Dr. Paul Hokemeyer, clinical psychotherapist and author of Fragile Power: Why Having Everything is Never Enough, tells Elite Daily. Here’s everything else they spotted about Jonas and Chopra’s body language on the red carpet. 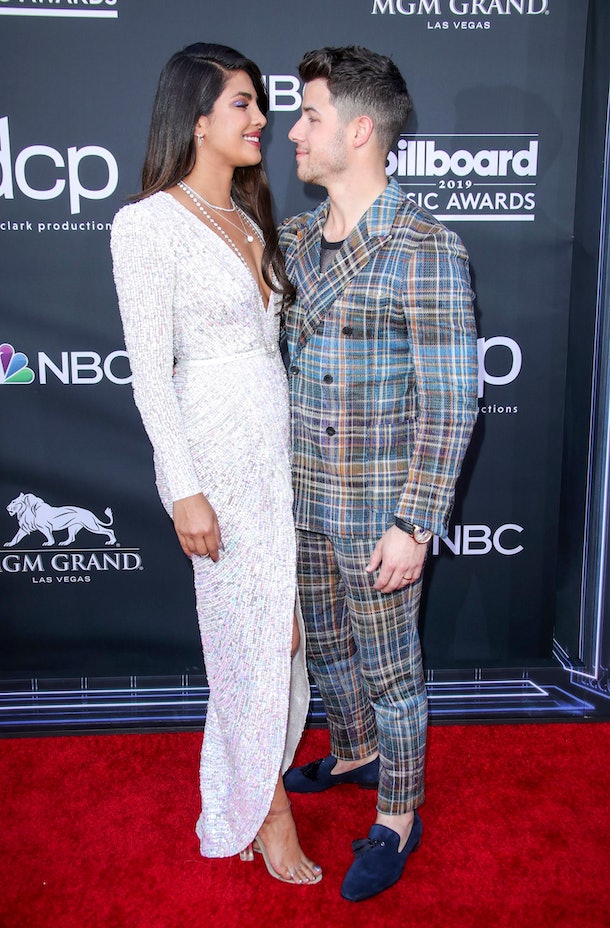 This picture shows one main thing about Jonas and Chopra: They’re comfortable together. "You see both bodies touching in multiple places so, clearly, something is comfortable here," Kevin Hogan, Psy.D., corporate trainer, and author of Invisible Influence, tells Elite Daily. The two body language clues that show their connection is their close V-pose and Jonas’ hand on Chopra’s waist, Sharon Sayler, behavioral communications expert and author of What Your Body Says and How To Master The Message, tells Elite Daily. "While you can’t see her back hand, his hands are intimately making a connection with her hip," she says.

Their sex life is rewarding. 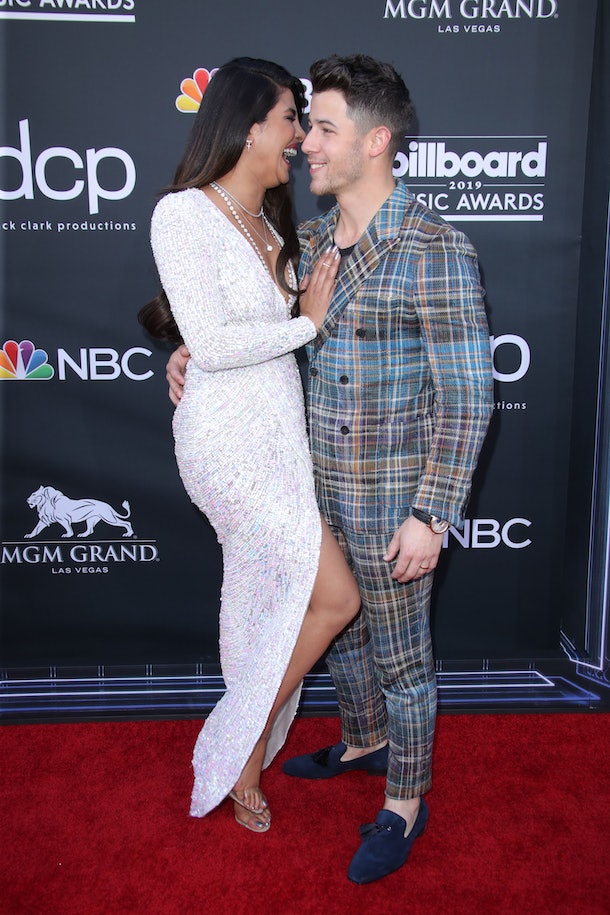 While Jonas and Chopra both look happy in this picture, Chopra is showing even more affection and connection than Jonas, Hogan says. "Her laugh/smile reveals that in this moment she is doing very well," he continues. But Jonas’ face shows less emotion. Chopra’s bent knee leaning toward Jonas’ hip and her hand on his chest shows that she’s assuming a sexual stance, Dr. Hokemeyer says. "In response, Jonas assumes a dominate posture," he points out. "This tells me they have a very rewarding, albeit rather conventional, sex life."

Even if he’s over the red carpet, he stays for her. 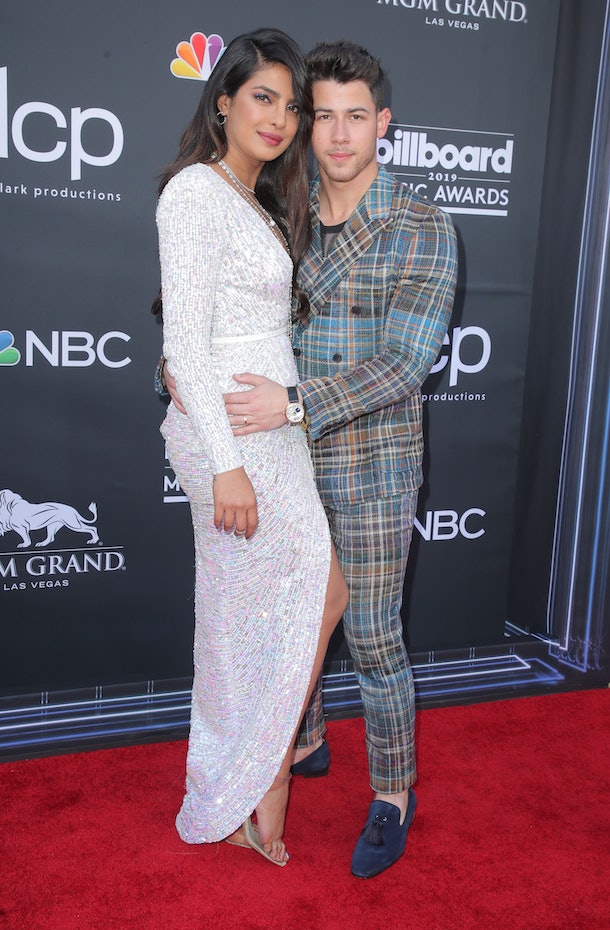 This picture of Jonas and Chopra on the red carpet is a little more serious than some of the other ones, and with good reason. According to Sayler, Jonas’ pose makes it seem like he’s over posing for pictures, but Chopra isn’t ready yet. "His straightforward look and determined movement suggest he is looking to make a quick escape while she is still enjoying the opportunity posing for the cameras, reinforcing she is enjoying the red-carpet moment more than he is," she says.

Their postures in this shot may also reveal a little bit more about Jonas and Chopra’s sex life, and their life together in general. It "tells me that while they may assume stereotypical roles in the bedroom, they operate as equals in other aspects of their relationship out in the world," Dr. Hokemeyer says.

They respect each other’s desires. 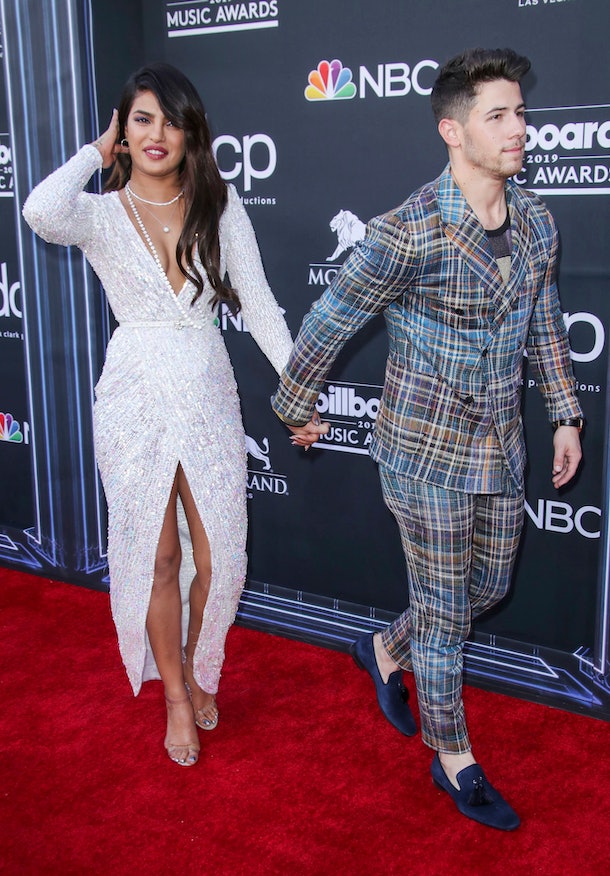 Before you freak out and think there’s trouble in paradise for Jonas and Chopra because of the weird tension in this picture, don’t. Even though her pose makes it look like she’s pulling back, it’s likely a combination of the moment the photo was taken, and Chopra trying to pose while she walks away, Sayler explains. "Like the pro she is, she knows she will need that upper body space between the two of them to turn her face toward the camera in the next moment," she says. "It is the ‘off-balance’ creating the tension in her head and neck that give us, the viewer, the feeling of tension as a couple."

The way Jonas and Chopra are walking away shows they respect each other’s desires, Dr. Hokemeyer says. "Jonas leaves but does so in a gracious rather than manipulative way, while remaining connected to his warm, gracious, and lovely wife," while she continues to connect with her fans as she walks away, he says.

They’re secure in their relationship. 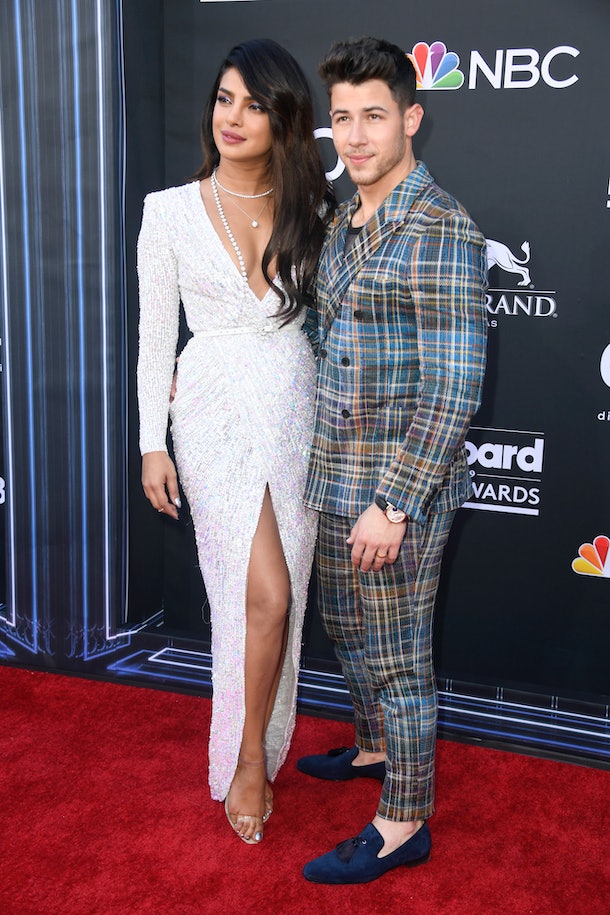 Even though they’re looking at two different photographers here, "this is not absolutely uncommon in celebrity couples on the red carpet," Hogan states. Not only is it common, but it also says a lot about who they are as a couple, Dr. Hokemeyer explains. They’re looking in different directions, but they’re still attached along their bodies. This "tells me they are secure in their relationship and support one another’s autonomy as celebrities adored by millions of fans all over the world," Dr. Hokemeyer continues.

Overall, it seems like Jonas and Chopra’s body language on the BBMAs 2019 red carpet shows their relationship is promising. Thank the gods! Now, when’s Chopra’s next appearance on another JoBro’s music video?