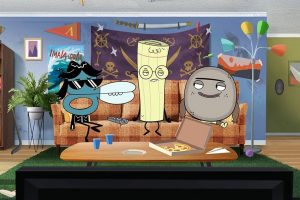 Nickelodeon is launching its Intergalactic Shorts Program 2.0 which opens its search for new and diverse creators from across the globe, Ramsey Naito, president of Nickelodeon Animation and Paramount Animation, announced Monday.

The Intergalactic Shorts Program 2.0 will focus on new voices and nurturing their vision for original comedy-drive content with an eye to representation, Naito added.

The 2.0 Program will be overseen by Nickelodeon executives Daniel Wineman and Chris Rose.

News of the new 2.0 Program comes as Nickelodeon gears up to bow “Rock, Paper, Scissors,”  the first finalised short and series greenlit from the 2019 inaugural program.

Nickelodeon has shared in exclusivity a two-minute clip with Variety from the short which Nickelodeon describes as “a buddy comedy about the joy and messiness of friendship.”

It serves to introduce the three friends – key in a show whose humor, though often rapid-fire slapstick, is very much character-driven.

Rock, Paper and Scissors are roommates who live in an apartment complex. “It’s time to watch TV!” bawls jubilantly Scissors, decked out in cool sunglasses and with beautifully quiffed hair.

Cut to four seconds of festive joy as the friends dance on the sofa to strobe lights, a confetti storm and frantic music in an example of the show’s peavy humor.

But Scissors wants to watch a highly punitive reality TV, where people get run over by a bulldozer, Rock prefers a body building contest – “My dream is to be model and I never gonna make it if I don’t mimic the moves,” he reasons – and Paper, the most cerebral of the three, prefers Tech Today.

As the three friends grapple for the remote, the large ego-ed Scissors suddenly turns up with a huge shark with immaculate white teeth to get his way. His power play will of course go drastically and comically awry, audiences will anticipate.

“We knew we were onto something special with creators Kyle Stegina and Josh Lehrman and their hilarious characters in Rock, Paper, Scissors, which we are so proud to bring to series,” said Naito.

“Finding and growing talent through the process of pitch to hit is what powers our Intergalactic Shorts Program, and we can’t wait to get started finding the next great creator in animation through our program’s just-launched second phase,” she added.

The original “Rock, Paper, Scissors” short and series are created, written and executive produced by Stegina (“Robot Chicken”) and Josh Lehrman (“Robot Chicken”), with Conrad Vernon (“Sausage Party”) and Bob Boyle (“The Fairly OddParents”) serving as executive producers on the series. “Rock, Paper, Scissors” is slated to debut on Paramount Plus in the U.S. and international markets in 2023.

Creators for the inaugural program have been sourced from the U.S. Those for the 2.0 Program will be sourced around the world, Naito told Variety.

That reflects Nickelodeon’s outreach to global talent under Naito, which was accelerated by the pandemic.

In its drive to hire talent, Nickelodeon launched a virtual recruiting drive during COVID-19 when 9,000 people from across the globe joined a recruiting session. “Going virtual and working off the cloud opened up opportunities for us and for everyone. And it brought us so much closer together in so many ways.”

Pitches for shorts can be made by artists, writers, and directors, Nickeoldeon confirmed Monday. Shorts will run on Nickelodeon’s platforms and are in the process of being developed into long-form animated series.

Shorts should feature “one-of-a-kind, character-driven comedy and surprising storytelling, combining humor with action-adventure, mystery, sci-fi, and more,” Nickelodeon added. “In line with Nickelodeon’s mission to make the best, original humor-driven content for kids, these creator-driven shorts offer content that is appealing to all members of the family, featuring a co-viewing lens of preschool (K 2-5) and big kids (K 6-11),” it announced.

The Program’s eye towards representation is crucial, Naito noted. “Nickelodeon’s core audience are kids between the ages of six and 11. More than 50% are non-white.”

“To serve and connect with that audience, we have to be inclusive. We have to hire inclusively and lead with a high level of inclusivity. Top down our leadership is very diverse and our creators are diverse. It’s because the world is diverse.”

At the Annecy Presentation, Naito will share a new clip of“Paws of Fury: The Legend of Hank” as she beats a drum for an upcoming animated feature release state.

People are excited to get out and go to the movies and they’re looking for family events and we have so many movies coming out,” Naito said citing “Paws of Fury:The Legend of Hank,” set to bow in July,” and three 2023 titles; the Seth Rogan-produced “Teenage Mutant Ninja Turtles” movie, “Paw Patrol 2: The Mighty Movie” and “The Tiger’s Apprentice.”