Nicolas Cage and Riko Shibata Welcome Their 1st Child Together, His 3rd 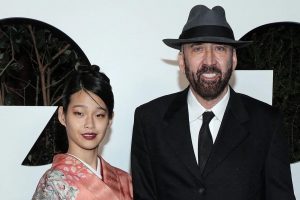 “Nicolas and Riko are happy to announce the birth of their daughter,” the couple said in a statement on Wednesday, September 7. “Mother and daughter are doing fine.”

Us confirmed in January that the model, 29, was pregnant with the 58-year-old actor’s third child. (The National Treasure star previously welcomed sons Weston, 31, and Kal-El, 16, with ex-wives Christina Fulton and Alice Kim, respectively.)

By March, the pair were considering names for their upcoming arrival — Akira Francesco for a boy and Lennon Augie for a girl.

“Augie was my father’s nickname,” the Oscar winner explained to GQ at the time. “And my uncle [Francis Ford Coppola] has decided to change his name to Francesco. … [The baby] is like a little edamame. A little bean.”

Cage, who was previously married to Patricia Arquette, Lisa Marie Presley, Kim, 38, and Erika Koike, praised Shibata at the time. The filmmaker told the outlet that another wedding is “not happening again” now that he and the Japan native have tied the knot.

The California native explained, “I am a romantic, and when I’m in love, I want to give that person everything I can. It’s my expression of saying, ‘I love you. I want to spend the rest of my life with you.’ And this is it for me. … This is it. This is it.”

The couple tied the knot in February 2021 after being introduced by mutual friends in Shiga, Japan, as Cage filmed Prisoners of the Ghostland there.

“I thought she was stunning when I met her. We had a lot in common,” the Golden Globe winner gushed to Entertainment Tonight five months after their nuptials. “She likes animals, too, so I asked her, ‘Do you have any pets?’ And she said, ‘Yes, I have flying squirrels.’ She had two sugar gliders. … I thought, ‘That’s it. This could work out.’”

Famous Fathers Who Had Kids Late in Life

While the Leaving Las Vegas star tends to keep his family life private, his eldest son did speak to The Hollywood Reporter in 2019 about his childhood.

“My dad introduced me to some of the greatest films in history from an early age, things like Seven Samurai, Rebel Without a Cause, the original Dracula, all of the greats, so that was a big influence from him,” the singer explained at the time.

As for Cage’s own childhood, he felt “alienated,” telling The New York Times in August 2019, “I was always shocked when my father would take me to a doctor and they didn’t tell me that my blood was green and I had 20 ribs, that I wasn’t some anomaly from outer space. But I’ve become extremely bored with myself. I spend my time watching movies or reading books and being with my son. That’s about it, with the occasional hiccup.”