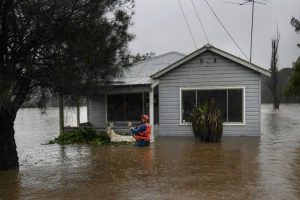 The days of calling disasters one-in-100-year events are over, experts say, as they warn that increasingly unpredictable weather events driven by global warming are happening more frequently, and we need to adapt and consider future urban development.

As Sydney was hammered by rain and Hawkesbury residents inundated for the fourth time in 18 months, NSW Premier Dominic Perrottet said the traditional metrics for measuring natural disasters had been overtaken by climate change. 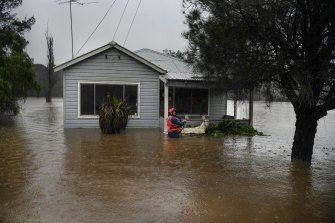 State emergency workers rescue a group of goats from a submerged home in Wallacia on Sunday.Credit:Dean Sewell

He is backed by Australian National University climate scientist Professor Mark Howden, who said public discussion about flood frequency, such as a one-in-one-hundred-year event “makes no sense in the changing climate”.

“The thing that we should be talking about is flood levels,” said Howden, who is also a vice-chair of the Intergovernmental Panel on Climate Change.

“When people say it’s a one-in-100 year event, what they are really referring to is a particular flood level. But today’s one-in-100 event might actually be next year’s one-in-50 year event and two decades from now, it might be a one-in-20 year event. So we can’t rely on those static measures.

“We have coming into our system unknown unknowns. That’s what we’re dealing with on climate change – that you no longer know the shape of that probability distribution.”

Howden said the fact scientists could no longer make probabilistic predictions should be a warning to policymakers.

“Don’t make decisions now that we may regret later,” he said.

“If you’ve got all these housing developments there, which are going to actually make the problem worse, that doesn’t sound like a very rational thing to do.”

Global warming raises the potential for heavy downpours because every degree increase in the air temperature means it can hold 7 per cent more moisture.

Melbourne University climate scientist Andrew King said it was clear that “climate change is intensifying those storms” that cause short-burst torrential downpours.

But it is far more complicated to demonstrate the role global warming was playing in weather patterns such as East Coast low-pressure systems that hover over one point on the map.

“We don’t really know yet how climate change affects kind of the persistence of weather systems like that,” King said.

However, Howden said multi-day rain events like the one Sydney is currently copping, had “embedded” in them the overarching effect of a warming climate, which warms the sea and injects extra energy into weather systems.

“The underlying physics of the system, which looks at sea surface temperatures, says of course, climate change is embedded in any of these systems.”

Perrottet said he had a “strong view” that flood-prone towns would not be shut down, and in fact encouraged to flourish. 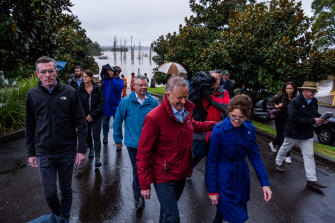 King said three decades of climate change meant “there definitely needs to be” a greater focus on where urban developments are located.

“It’s really sad to see people experiencing flooding multiple times this year in Sydney and in Lismore and other places,” King said.

“In the last few years, we’ve seen lots of people experience property loss and damage through the bushfires and other floods.”

Prime Minister Anthony Albanese criticised the previous government for failing over the past two years to spend any of the $4.8 billion Emergency Relief Fund and promised to “work with state and territory governments from across the political spectrum”.

He said Labor would invest “to make sure that we’re preparing for the changes in weather patterns and what that means for disasters”.