A Big Apple comedy club owner is angry that “Saturday Night Live” is shooting with a live audience, while the city’s comedy clubs remain empty because of COVID — and he says he’s disappointed that the city’s big-name comedians haven’t done more to help the ailing industry.

Dani Zoldan, co-owner of Upper West Side comedy club Stand Up NY, told Page Six that it seems as if there’s one set of rules for the longrunning NBC show and another for local clubs.

CUOMO’S CORONAVIRUS RESTRICTIONS ARE ‘ARBITRARY DECISIONS NOT BASED ON SCIENCE': PATAKI

He told us that comedy clubs in the city are being forced out of business by the lockdown, and said, “From the perspective of a comedy club owner, it’s frustrating, day in and day out, to bear witness to this loss and see that every Saturday night ‘SNL’ is allowed to produce their show indoors, seemingly in violation of the same laws crushing small businesses all over New York City.”

“They have a live studio audience and the cast members are not social distancing,” he said. “I was watching the show Saturday night and I was so upset that struggling comedy clubs are going out of business while they’re doing their thing and collecting a paycheck.”

During his appearance, Staten Island native Davidson cracked of the protest, “People were outside the bar, talking about freedom, taunting the cops, chanting that they should arrest the governor, but it’s Staten Island so I assumed that it was just like a typical last call.”

According to the New York Times, “SNL” has gotten around the ban on live audience by paying audience members $150 each — technically making them members of the cast. 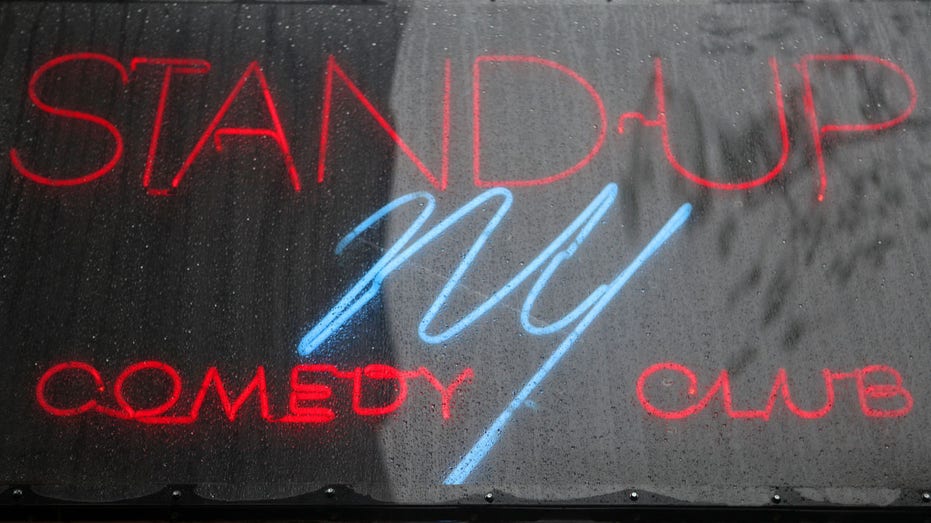 Close-up of the neon sign for the Stand Up NY Comedy Club on Manhattan’s Upper West Side neighborhood on May 8, 2013. (Oliver Morris/Getty Images)

A source close to the show told us, “’SNL’ participants are in complete compliance with the rules and regulations set forth by the government. Everyone at the show is held to the same rigorous COVID protocols. These protocols include a pre-screening as well as same-day COVID testing of anyone working on or participating in the show.  In addition, they must abide by all regulations including temperature checks, social distancing and face coverings.”

Meanwhile, Zoldan said that big stars — including Davidson — who graduated from the local comedy scene should be doing more to help struggling clubs and comics.

“Chris Rock, Dave Chappelle, Amy Schumer — every one of them got their start at a comedy club and it’s so disappointing to see that they have been silent since the pandemic started,” he said.

NYC ON VERGE OF ANOTHER INDOOR DINING SHUTDOWN AMID CORONAVIRUS SPIKE

“There has been no support from these big-name comics,” he said.

Zoldan is even more disappointed in Davidson since he got his start at the age of 18 at his own club.

“I have reached out to a couple comedians and I have not gotten a response,” he said.

The Stand Up NY’s other co-owner, James Altucher, memorably courted controversy when he wrote a viral essay titled “New York City is Dead Forever” in August, which received a stinging rebuttal from Jerry Seinfeld in an op-ed he wrote for the New York Times.

“He bashed [Altucher] as well as the club saying we need to spruce up the club. So it’s the rich guy picking on the little guy,” Zoldan said.

“The problem is a lot of these comedians made it and became rich,” he said, “The point is to remember where you came from. Remember when you were broke and the upcoming comedians coming up behind you.”

Zoldan is planning on hosting a fundraiser in February to raise money for comedy clubs and save them from closing down.

In March, we reported that comic Mike Birbiglia had set up a series of GoFundMe pages to raise money for furloughed comedy club staff, and that New York comics — including “SNL’s” Michael Che — donated tens of thousands of dollars in total to the one benefiting staff from the Comedy Cellar.

END_OF_DOCUMENT_TOKEN_TO_BE_REPLACED

END_OF_DOCUMENT_TOKEN_TO_BE_REPLACED
We and our partners use cookies on this site to improve our service, perform analytics, personalize advertising, measure advertising performance, and remember website preferences.Ok