Opera House CEO Louise Herron opens up about ‘that’ call

There is an elephant in the room the day Sydney Opera House chief executive Louise Herron and I sit down for lunch in her Bennelong Point office.

With one of the best views of Sydney Harbour it is easy to see why she dines in most days and has invited me to join her. The room is tastefully appointed with art donated by the many people this building has inspired. There's a dark and moody Peter Kingston painting of the Opera House on the wall behind her desk, hanging above a piece of pottery by ceramicist Lin Utzon, daughter of the building's Danish architect Jorn Utzon. 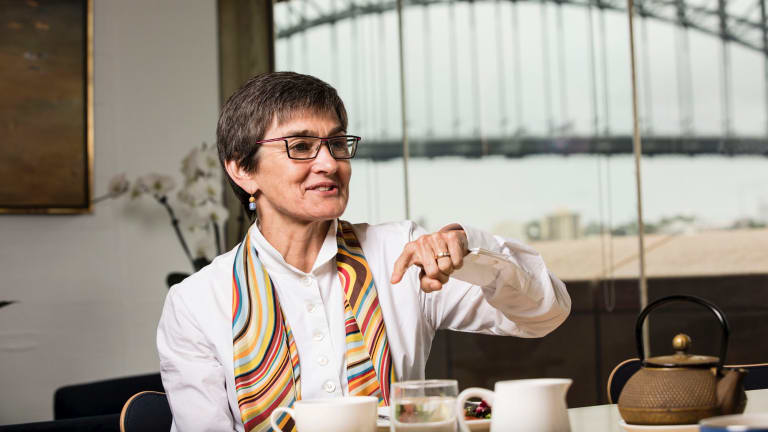 “What the Everest showed was really how much people love the Opera House.”Credit:Dominic Lorrimer

She's suggested we both order baked salmon from the green room staff cafeteria run by former rugby player George Gregan and it is promptly delivered to the office dining table. What will not be on the table for discussion, I am warned, is Alan Jones. If the 2GB broadcaster had his way back in October, it would be her resignation on the table rather than the Gregan Group's salmon salad, which is getting cold while we wait for the photographer.

"You're out of your depth … you should be sacked," the 2GB broadcaster declared in an on-air brouhaha that's gone down in Sydney folklore. Briefly: In October this year, the same month the building celebrated 45 years since its 1973 opening, Racing NSW announced it wanted to advertise the barrier draw for the Everest horse race by projecting it onto the world famous sails of the Opera House.

Herron resisted, citing Opera House policy not to project words, but agreeing to use the jockey's colours. On live radio, Jones called for her to be sacked. Many labelled it misogynistic bullying. Jones called it a "fiery exchange". Later that day Premier Gladys Berejiklian overrode Herron and handed Racing NSW and the broadcaster most of what they had asked for. In the few days between the decision and the planned projection, 311,000 signatures were gathered in support of Herron, calling for the advertising to be stopped.

The Everest illuminations did send a picture of Sydney around the world, but perhaps not the one Racing NSW's Peter V'landys wanted. The spat was covered in countless countries, making even page seven of The New York Times. Louise Herron's name was suddenly, if not up in lights, on everyone's lips. 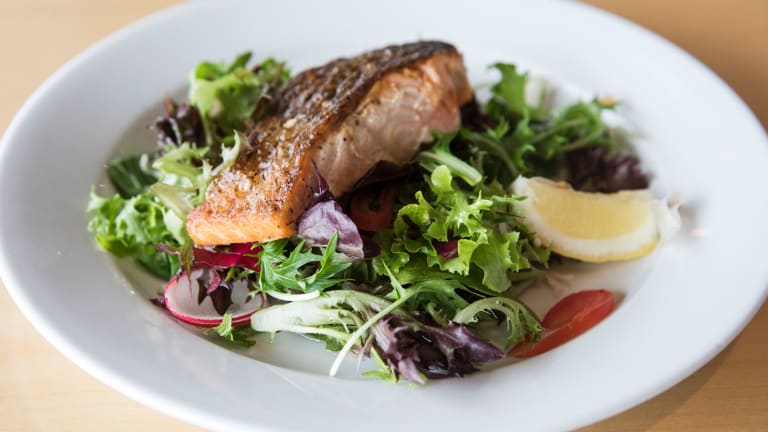 At her first public appearance after the event, at the screening of a documentary on the life of Utzon, the crowd greeted her with rousing applause. At the protest against the illuminations, the crowd chanted "worst Vivid ever" while other wags piped up with "Herron for PM" and "Louise for Premier".

"Really, I haven't heard that one," says Herron, who despite her apparent public popularity has ruled out a career in politics post Opera House. Public service and law are in her genes: her great uncle Sir Leslie Herron was Lieutenant Governor and Chief Justice of NSW. Even a ferry, the Lady Herron, named for his wife, her great aunt Andree, graced Sydney Harbour until it was withdrawn from service last year. It would toot as it passed her window, which she often looks out of while on the phone having difficult conversations (like the one to you know who). 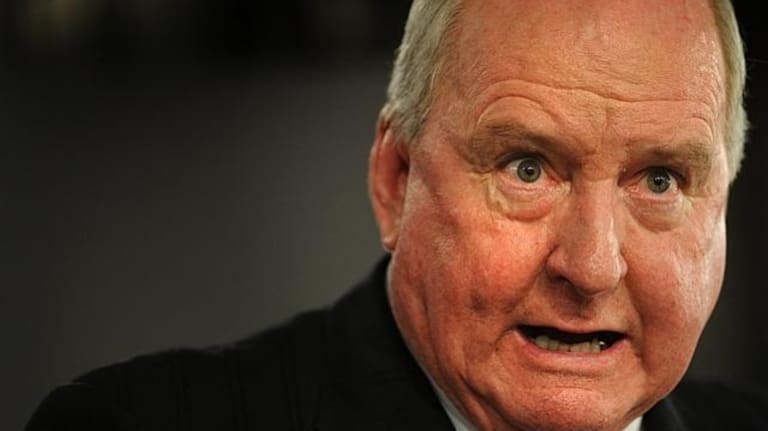 Alan Jones apologised for the call in which he lashed Herron over the use of the Opera House.Credit:Photo: Marina Neil

She's watched thousands climb the Harbour Bridge from here, a Moreton Bay fig tree removed from Admiralty House, and estimates from observation the average life of an Australian flag atop the bridge is six weeks before it gets frayed. Herron's lifespan before she gets frayed is much longer: her fixed-term contract was made indefinite in May this year, and she has vowed she will stay at least until 2023, the building's 50th anniversary and the completion of its decade of renewal.

About 900 people wrote to her post Everest – including Jones who wrote an apology, which he uncharacteristically read out on air. She replied to each letter and email, among them one from a woman in Orange, whose letter so moved Herron she invited her to tea in her office. She brought "delicious vegan chocolate balls" recalls Herron, who is wiry and tiny, "almost bigger" than her last dog Olive, a great dane. She is sole parenting her new dog, Wilbur, a Rhodesian ridgeback in their Paddington home, as her second husband Clark Butler is already in America. The energetic Herron swims and joins colleagues for circuit training on the Opera House steps several mornings each week. 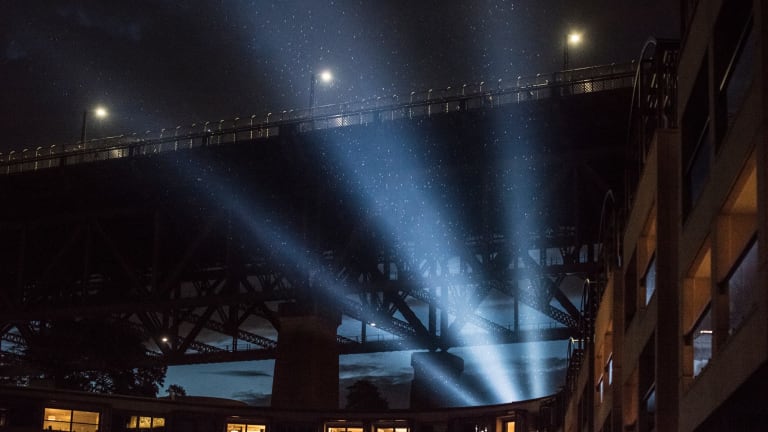 Protestors shine light onto the sails of the Opera House during the launch of the Everest barrier draw.

Herron and I have danced around the Everest subject before, like one of the ballerinas I've walked past limbering up on the exercise bike in the labryrintine corridors you walk down to get to her office. But she's refused to be drawn on it. A consummate diplomat, she takes her role as custodian of the building seriously, and those who work with her say she manages the needs of the building's many stakeholders (read egos) with aplomb. Including its nearest neighbours, the residents of the Bennelong Apartments, home to the broadcaster who shall not be named.

"What the Everest showed was really how much people love the Opera House," she says. "That was the overwhelming impression I was left with. This is a treasure and it is treasured by the community it was built for. I did reply to everyone who wrote to me because I so appreciated the public outpouring of passion for the Opera House." Then she stops. She knows I know her back story. Her education at a Swiss boarding school, her return to work as a partner at Minter Ellison when her eldest son was nine weeks old while her mother, who lived next door, cared for "Dougs", as she calls him. 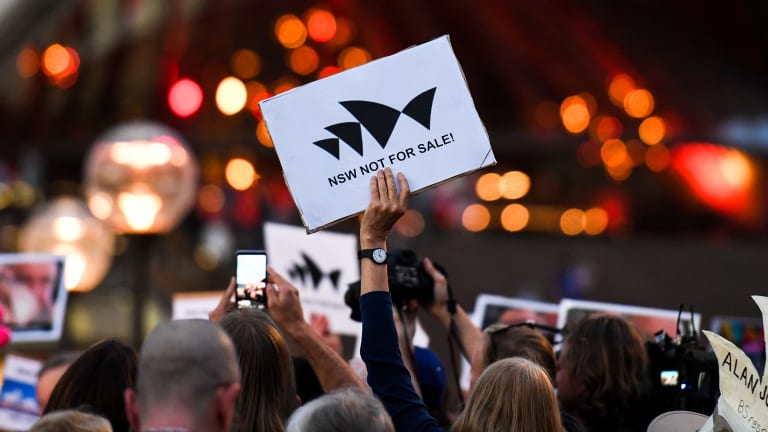 Demonstrators hold placards during a protest against the decision to project the barrier draw results for NSW Racing’s multi million dollar race, The Everest, onto the sails of the Opera House, in Sydney.Credit:AAPIMAGE

We've even heard about her insomnia and the sleep app she had on her phone to monitor it (since deleted now she's getting more sleep thanks to limiting alcohol, coffee and tea). Sensing what most Sydneysiders will want to know, she finally addresses the elephant in the room.

"It was an intense few minutes but then it was over and he apologised," she says. "It made me think about situations that people experience that go on for a lot longer and are more difficult to end. I think that isn't uncommon and I wish it weren't the case." 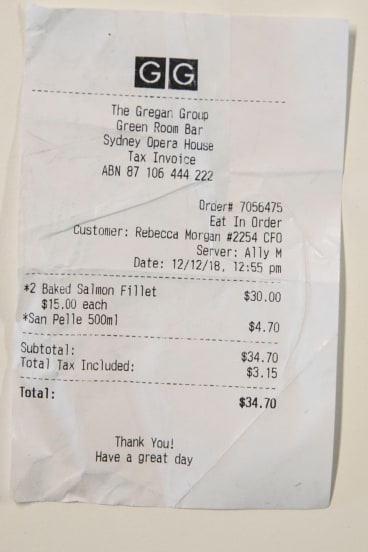 But to many who love the Opera House, it was a big deal. While disappointed she didn't get an opportunity to put her point across she even agreed with Jones' sentiment when he said: "We own the Opera House … do you get that? … you only manage it."

"It shows he cares about racing, he cares about many things including the Opera House and he was really passionate … I think I was detached and that is such a good thing to be able to train yourself to be."

She says she's learnt professional detachment from her many mentors including former banker Helen Lynch, former Senator Helen Coonan (who calls mentoring "boosting") and Charlie Taylor, a director with McKinseys. She tells a seminal story about Taylor's grandfather, Sir William Hudson, the first Commissioner of the Snowy Mountains Scheme who was sacked just before the project was completed.

"It's just the most tragic story … imagine giving your life to something and just before the crowning moment your head gets chopped off," she says. I tell her that reminds me of the Utzon story, the man who dreamt up the masterpiece she now manages, but who never got to see it complete because he resigned in a rage after a disagreement with the NSW government.

"That's why I think it had so much resonance with me. His grandfather really suffered because he wasn't able to detach from what had happened to him." As if on cue, the Manly ferry toots twice as it passes the building, and as she had warned me it would, the concrete building shakes. She's going home to her nearly 90-year-old father and his new partner (her mother died last year), her friend journalist Sarah Ferguson, and of course Wilbur the dog, who will be minded by her parents-in-law during her holiday. As I leave I wonder how long it will be before Herron, already given the Order of Australia for her Opera House work, is paid that most Sydney of compliments: a ferry named for her.

Helen Pitt is the author of The House, published by Allen & Unwin.