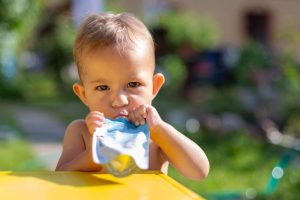 As many parents turn to baby food pouches to feed their young ones, a recent study has found that the food source is not as harmless as first thought.

A survey by dentists has found that tooth decay, diet, and obesity are all common problems that can arise, with many popular baby food pouches more sugary than Coca-Cola.

One survey by the British Dental Association (BDA) of 109 pouches aimed at children under 12 months old found that more than a quarter contained more sugar by volume than the fizzy drink.

Fruit-based pouches marketed for infants as young as four months old contained sugar levels the equivalent of up to 150% of the soft drink, according to the findings.

The BDA hit out at “meaningless” marketing claims such as “naturally occurring sugars” and “no added sugar”, saying they were misleading parents into thinking they were making healthy choices.

The survey also found that almost 40% of products were marketed at babies “four months plus”, despite both UK and World Health Organisation guidance recommending weaning from six months old.

Several products also claimed they were “nutritionally approved” or in line with infants’ “nutritional and developmental needs”, the BDA said.

The survey also called out brands using “hero” labelling to potentially fool parents and make them believe the pouches are a healthy choice for their little ones.

The survey found a focus on the “organic” status of particular brands or that they were “high in fibre” or contained “1 of your 5 a day”.

The BDA singled out “boutique” brands including market leaders Ella’s Kitchen and Annabel Karmel for appearing to have higher levels of sugar than traditional baby food brands or own-brand alternatives.

Manufacturers said high levels of natural or locked-in sugar was inevitable with fruit-based pouches, but some brands managed to offer similar products containing around half the sugar of the worst offenders, the survey found.

The BDA also warned that infants often sucked directly from the pouches, for the convenience of caregivers while on the move. This ensured the food spent more time in contact with baby teeth and increased the risk of erosion and decay.

The Department of Health and Social Care is expected to consult imminently on the marketing and labelling of infant food.

Dentist leaders said the excessive levels of sugar in many infant pouches warranted action, including clearer “traffic light” labelling and potential expansion of the Sugar Levy to encourage reformulation.

BDA chairman Eddie Crouch said: “Disingenuous marketeers are giving parents the impression they are making a healthy choice with these pouches. Nothing could be further from the truth.

"Claims of ‘no added sugar’ are meaningless when mums and dads end up delivering the lion’s share of a can of Coke to their infants".