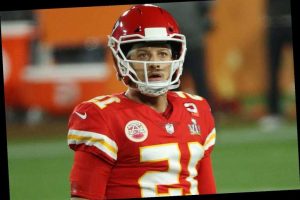 Patrick Mahomes is taking the Kansas City Chiefs' loss in stride — and as motivation.

Mahomes, who led Kansas City to a Super Bowl win last year, and his team fell in what was expected to be a high-scoring championship game in Tampa, Florida, on Sunday. The Tampa Bay Buccaneers defeated the reigning champions 31-9.

"They were the better team today,'' Mahomes told reporters in a post-game press conference, ESPN reported. "They beat us pretty good, the worst I think I've been beaten in a long time."

Mahomes continued of the Buccaneers, "They played a heck of a game defensively and offensively to beat us.''

"It hurts a lot. But we're going to continue to get better," he assured. "We have a young group of guys that had a lot of success and we learned from that, but we've had a few failures and we have to learn from that."

Continued Mahomes, according to ESPN, "We can't let this define us. We have to continue to get better going into next year and prepare ourselves to hopefully be in this game again. We knew it wasn't always going to be successful and we weren't going to be able to win 1,000 championships in a row. We knew we were going to go through times like this and adversity."

Mahomes' fiancé, who is currently pregnant with the couple's first child, shared a similar message of support after Super Bowl LV's conclusion.

Writing on Twitter, Brittany Matthews said, "Not how we wanted it to end, but 15 played his heart out and I'm always and forever proud of him in everything he does! Now let's have a baby."

Matthews first announced her pregnancy news in September, shortly after the couple — who began dating when they were teenagers — got engaged following the Chiefs' 2020 Super Bowl ring ceremony and one day after her 25th birthday.