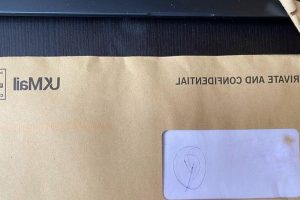 When you receive letters through the door, most of us may shudder in fear at the thought of receiving an unwanted bill or a bank statement to remind us of this month's pricey outgoings.

However, this curious bunch of Brits have started to wonder why some of their Royal Mail post arrives with a particular letter scribbled across it.

And, it turns out it’s not the postman getting bored and having a doodle to pass the time.

The letter ‘P’ sometimes found inked onto the front of the envelope actually has some significance. But, why is it so important?

Many Reddit users have theorised as to why P is scribbled onto their letters.

One person fretted: “It's what thieves use to mark your house to let others know you have expensive dogs.”

Another user questioned: “Postman's way of letting you know he thinks you're a p****er.”

Fear not though – it has nothing to do with criminal markings or dislike towards you from your local postie.

In actual fact, the ‘P’ is important as it allows the postman to do their job correctly and efficiently, making sure you get all your deliveries on time.

Luckily, a postman on Reddit reassured the masses that the ‘P’ just helps them and their fellow posties track when there's parcels coming.

They explained: “You had a packet/parcel. Stops us from forgetting about it!”

And another reiterated the point: “It's the postie's way of reminding themselves that when they come to post your letter there's also a parcel for you.

"That's so they don't post your letter then find out halfway down the street they forgot to knock and give you your parcel.

“Or sometimes they'll write P10 or something on the previous letter – that lets them know they have a parcel for next door (number 10) but no letter.”

So there you have it, we have debunked the case of the postman’s code!

The ‘P’ is just a reminder for postmen that they have a parcel to deliver as well as a letter.

We think we will let them off for scribbling it on our letters now!

Let us know in the comments if you had wondered what the ‘P’ was for!