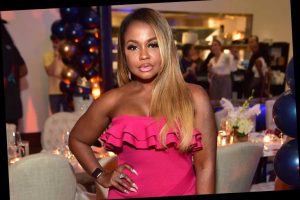 Reality TV star Phaedra Parks says her business as a mortician is “booming” as a result of the coronavirus pandemic.

Parks — the former “Real Housewives of Atlanta” star who’s now on “Marriage Bootcamp” — is also a licensed funeral director and mortician, plus a top Atlanta lawyer, author and activist. She exclusively revealed on Wednesday to Page Six podcast “We Hear” of her mortuary biz: “Oh my gosh, it’s going great, didn’t you hear about that pandemic, girl? We are booming. Unfortunately. We have been jam-packed since the pandemic started.”

She said that she’s seen the devastation of the virus first-hand: “I’m not physician, however, I do have a mortuary and I’ll tell you this: Normally in the summer months, we’re waiting for a boating accident or a motorcycle crash, because otherwise, we’re pretty empty,” she said. “We are jam-packed. We are working like it’s our heaviest season, so… I tell people when they say, ‘It’s a joke, it’s not that big of a deal,’ well, let me put it to you in real terms, I’m getting 17 calls a day for pickups and that’s at one location. Last week, all of the people were under 59.”

She said she’s seen so many fatalities of people in their 20s, “it makes it extremely frightening… I’ve seen several mothers come in burying their children.” She added of the difficult situation, “the pandemic really wreaks havoc on families, so we’ve buried three or four people in one immediate family. It’s really sad. It definitely takes a toll on you emotionally seeing a mother, a father, a son, an aunt… this pandemic is really serious and people should realize that, because it’s not a joke.”

The pandemic has also kept her and boyfriend Medina Islam, an actor based in LA, in a long-distance relationship. But the couple went on the current season of “Marriage Bootcamp” together after they’d been dating for just six months, and had never been intimate together.

“I’ve been pretty awesome when it comes to being able to master different careers, and I’ve got several jobs. But when it comes to relationships, I haven’t always been so successful with it,” Parks said of her decision to go on the relationship show. “I wanted to make sure that the passion didn’t cloud my judgment, because… when you’re entangled, sometimes the entangling can be so good you can’t really [think] outside the entanglement.”

She would not reveal if the pair has since been further physically entangled, but hinted that the subject could be captured by the WE tv show’s cameras, which are on at all times — except when, “you’re on the loo.”