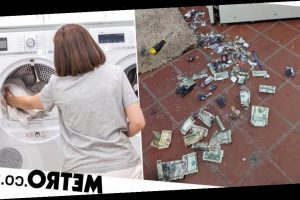 Anyone who’s about to throw out their old tumble dryer: stop right there.

If you’ve bought a new washing machine or tumble dryer in the Black Friday sales, there’s something important you should do before you bin your old one.

That task is simple, but could bring you a lot of joy: open up your tumble dryer and check what’s inside.

Mum Lana, of Cleveland, Ohio, shared a photo of what was found hidden inside a tumble dryer that was no longer working – and it’s quite the haul.

The photo has been making its way around the internet for quite some time, so we’re not sure who the dryer and its contents belong to.

When the owner unscrewed the dryer and took it apart, they found plenty of lint, pens, and rubbish… but also quite a bit of cash.

Along with coins, there were a number of cash notes, which were clean, dry, and in good enough condition to spend.

Lana wrote on Facebook: ‘Before you throw them non working dryers out, You might want to get a screw driver and open them up.’

That post has been shared more than 32,000 times, with many people vowing to never again chuck out a tumble dryer without at least checking what’s tucked away inside.

Just imagine the regret you’d feel if you threw out a washing machine that secretly had a load of forgotten £20 notes inside.

One person wrote: ‘I often wondered where all my $$ was going.’

Another said: ‘Let me go open my grandma’s dryer TONIGHT.’

But one man raised a valid point, writing: ‘But where them socks at?’

We’re sticking with the theory that tumble dryers have a hole to another dimension.

END_OF_DOCUMENT_TOKEN_TO_BE_REPLACED

END_OF_DOCUMENT_TOKEN_TO_BE_REPLACED
We and our partners use cookies on this site to improve our service, perform analytics, personalize advertising, measure advertising performance, and remember website preferences.Ok