Home » Lifestyle » Photos show difference in how police responded to anti-racism protests and the siege at the U.S. Capitol

Photos show difference in how police responded to anti-racism protests and the siege at the U.S. Capitol 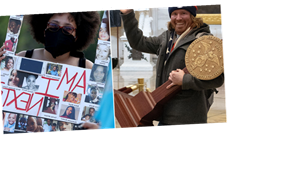 When Congress meets to certify presidential elections, it’s normally ceremonial and smooth. Wednesday was anything but when lawmakers gathered to count electoral votes from November’s balloting.

The session was met with chaos as supporters of President Trump stormed the Capitol, forced buildings into lockdown and infiltrated offices and chambers.

As videos and images emerged of the protest-turned-riot, a picture came into focus of how the assault was handled — and how that contrasted greatly from the management of the racial injustice protests that swept through the nation during many of the months before.

Around 2 p.m., protesters somehow made their way inside the Capitol building, where Congress was meeting to finish counting the electoral votes. The process was halted and the building was put under lockdown as Trump supporters broke windows and attempted to force their way inside.

Congressional members were evacuated and soon after, demonstrators ransacked offices and the Senate chamber. Photos show many of them stealing documents and artifacts from the building, including a podium.

It took hours for the National Guard to be deployed to the scene.

At day’s end, Metro D.C. police reported that four people died during the chaos, including one woman who was shot by police. More than 52 people were arrested, most for violations related to a 6 p.m. curfew D.C. Mayor Muriel Bowser imposed.

The siege occurred after months marked by racial injustice protests, some of which were marred by violence.

Before September of last year, at least 771 people were killed by police. Roughly 21% of them were Black — a statistic that played a large part in the nationwide outrage.

Thousands of people spent months demonstrating against racial injustice, and CBS News and its affiliates reported on dozens of instances of people getting injured, sometimes fatally, in interactions with police while doing so. Many officials criticized the protests, including Mr. Trump, who insisted some of them were the actions of “thugs.”

Here’s a look at Wednesday’s siege at the Capital and the Black Lives Matter protests of 2020, and how officials responded differently:

On Wednesday, Trump supporters broke into the U.S. Capitol, where they were met by Capitol Police. They still found their way into the Senate chamber.

On July 26 last year, federal police pulled down a protester in downtown Portland, Oregon, who they then arrested, according to a photographer who witnessed it. The incident occurred after 56 straight days of demonstrations in the area as people protested the death of George Floyd on May 25.

On Wednesday, an officer was seen calmly coaxing back Trump supporters who had broken into the U.S. Capitol.

On September 25, 2020, protesters in Louisville, Kentucky, who were demonstrating against state Attorney General Daniel Cameron’s handling of the case involving Breonna Taylor’s death were met with police armed in riot gear.

A large group of Trump backers broke into the U.S. Capitol on Wednesday after growing violent as they protested the results of the presidential election.

People in New York City gathered on September 24, 2020 to protest the Kentucky grand jury’s decision to only charge one Louisville Metro Police officer of the several involved in the fatal shooting of Breonna Taylor. At that protest, and many others, protesters kneeled to peacefully protest the decision.

After breaking into the Capitol, Trump supporters entered the Senate chamber on Wednesday, where they searched through documents, went through desks and took photos.

Roughly four months earlier, protesters gathered in Rochester, New York, in a demonstration over the death of Daniel Prude, who died in March when Rochester police officers placed a “spit hood” over his head and pinned him to the ground. The protesters were met with dozens of officers in riot gear.

A police officer at the U.S. Capitol helped one of the protesters on Wednesday who had been impacted by chemical agents that police used to try to disperse crowds.

In Washington, D.C. on June 10 last year, demonstrators gathered near the Lincoln Memorial to protest police brutality and racial injustices in the wake of the death of George Floyd.

Trump supporters who took part in the siege of the U.S. Capitol stole items from the building. This man took House Speaker Nancy Pelosi’s lectern and carried it through the building’s Rotunda as he smiled and waved to photographers.

Following an incident in which a police officer shot Jacob Blake seven times in the back, police in Kenosha, Wisconsin, set up an armed perimeter around the Kenosha County Courthouse.