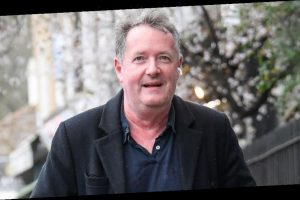 Piers Morgan has broken his silence since leaving his job as co-host of “Good Morning Britain” on Tuesday, following two days of sparking outrage with comments about Meghan Markle and Prince Harry’s tell-all interview with Oprah Winfrey.

Having first shared a GIF of a ticking clock, Morgan later tweeted a lengthier statement about what had transpired, addressing both his critics and his supporters.

“On Monday, I said I didn’t believe Meghan Markle in her Oprah interview,” he began. “I’ve had time to reflect on this opinion, and I still don’t. If you did, OK. Freedom of speech is a hill I’m happy to die on. Thanks for all the love, and hate. I’m off to spend more time with my opinions.”

Morgan — who joined “Good Morning Britain” in 2015 — first as a guest host and later in a permanent role alongside co-host Susanna Reid — then tweeted about how good the ratings were of his last show, during which he stormed off the set after pushback on his statements about the Sussexes.

Beyonce shares message of support for Duchess Meghan: 'We are all strengthened and inspired by you'

“BREAKING NEWS: Good Morning Britain beat BBC Breakfast in the ratings yesterday for the first time. My work is done,” he wrote.

Morgan doubled down on these sentiments when speaking to the press on Wednesday.

“I believe in freedom of speech, I believe in the right to be allowed to have an opinion,” he stated. “If people want to believe Meghan Markle, that’s entirely their right. I don’t believe almost anything that comes out of her mouth. And I think the damage she’s done to the British monarchy and to the queen at a time when Prince Philip is lying in hospital is enormous and, frankly, contemptible. So if I have to fall on my sword for expressing an honestly held opinion about Meghan Markle and that diatribe of bilge that she came out with in that interview, so be it,” he concluded.

“Following discussions with ITV, Piers Morgan has decided now is the time to leave Good Morning Britain,” the network said in a statement. “ITV has accepted this decision and has nothing further to add.”

This turn of events came after Morgan said “I don’t believe a word she said” after a clip aired during Monday’s show of Meghan discussing her mental health struggles — including suicidal thoughts — with Winfrey. He added, “I wouldn’t believe it if she read me a weather report.”

In the wake of this, Ofcom, a U.K. broadcast regulator, said Tuesday it had launched an investigation into the “Good Morning Britain” episode under its “harm and offence rules” after having received more than 41,000 complaints.

Mind, a mental health charity in the UK, said on Monday that they were “disappointed and concerned” after hearing Morgan’s comments on Meghan’s experience and said Monday they were “in conversations with ITV” about the segment.

ABC News understands the duchess contacted ITV after Morgan’s comments on Monday. Our source noted that Meghan didn’t contact them to complain about Morgan’s criticisms of her, but that she was concerned about a high-profile person like him publicly dismissing someone’s mental health struggles.

Morgan addressed his comments Tuesday by saying he still had “concerns about the veracity” of what Meghan said but that he takes mental health and suicide seriously.

“These are clearly extremely serious things that should be taken extremely seriously, and if someone is feeling that way they should get the treatment and help they need every time,” he continued, reiterating his “disbelief” of Meghan but an openness for him to be proven wrong.

Morgan also shared his opinions on Meghan and Prince Harry’s claims in the Winfrey interview of racist treatment from the British tabloids and racism within the royal family itself, referencing conversations about “how dark” their son Archie’s skin might be. Harry later made it clear to Winfrey that Queen Elizabeth and Prince Philip were not part of these talks that included the alleged comments about Archie’s skin tone.

Queen Elizabeth said in a statement the issues raised in the Winfrey interview are “concerning,” particularly regarding the one of race. The queen said “some recollections may vary” but that the royal family is this “very seriously” and issues “will be addressed by the family privately.”

On Tuesday, before he left the show, Morgan got into a heated exchange with “Good Morning Britain” weatherman Alex Beresford, who is biracial. When Beresford questioned why Morgan continued to “trash” Meghan, Morgan stood up and walked off the set. Beresford called Morgan’s actions “pathetic” and “diabolical behavior.”

Wednesday, during the first episode of “Good Morning Britain” without Morgan, Reid addressed the departure of her former co-host, telling viewers: “Shows go on and so on we go.”