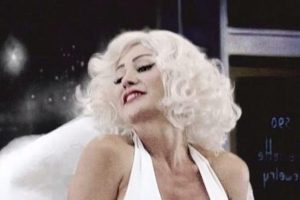 A Playboy model has paid tribute to her idol Marilyn Monroe by recreating the iconic moment her skirt blew up in a white dress for Halloween.

Francia James, 32, was seen in the clip wearing a curly blonde wig, red lipstick and a plunging white dress, as she struggled to keep her skirt from blowing up.

The background suddenly changes as the background is revealed to be a greenscreen and the OnlyFans star appeared to be standing in the middle of a warehouse.

Francia went into full diva mode, as she ripped off her wing and yelled: "Oh my God! They ruined my shot, I can not believe this! I'm done!

"This is all you could find for me, an entire shop full of grease?! I'm done, I'm done for today. Thank you, bye."

The video, which was shared with the Daily Star, was intended as a recreation of the iconic moment Marilyn Monroe stepped over a windy steam grate wearing a white dress.

Marilyn's dress had been designed by costume designer William Travilla in the 1955 film The Seven Year Itch, directed by Billy Wilder.

Speaking about her decision to pay tribute to Marilyn for her Halloween video for Instagram, Francia said: "When making a video the first few seconds is what makes or breaks the views.

"I wanted to do a comedy skit which is tough so I picked the most iconic female that has ever lived to start the skit.

"I wanted to do some special effects so I teamed up with my friend Charley over at the compositing lab.

"I love making videos with a twist so I gave him my idea and he helped bring it to life.

"I was at the tire store one day and I saw this machine that shoots air into a tire as it puts rims on.

"The scene where the air blows up Marilyn's skirt came to my mind so I had to bring it to life.

"It would be a dream to be as beautiful and gracious as Miss Monroe."

The model also claims that she was seen walking through the street in the statement costume and received a great reaction from the public.

She said: "Everyone loves Marlyn. I stopped at the store on the way to film and people were asking to take photos with me it was so cute."