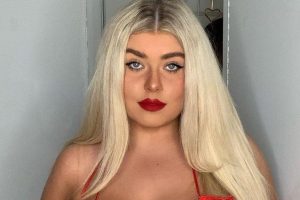 The 22-year-old from Worcester has taken to her Instagram page to share a number of sizzling snaps as she encourages fans to love their bodies.

The first of these saw the blonde bombshell unleash her curves in some lacy, red, lingerie as she got her 196,000 followers hot under the collar.

Izzy was seen flaunting her buxom cleavage in the bra, from brand PrettyLittleThing, which she teamed with matching bottoms.

She also showed off her waist, hips and thigh-brow and she didn't hold anything back.

Meanwhile, her golden locks were styled straight, as she wore her tresses in a centre-parting.

Izzy encouraged her fans to strip off if they love their bodies, like she does hers.

She wrote in the caption: "If you in love with your body bitch take off your clothes."

Fans were loving the post, as it racked up more than 8,000 likes.

While another gushed: "You are absolutely incredible."

Izzy didn't stop there with the sassy photos though.

She also showed off her curvy rear in another underwear set from Rihanna's brand Savage x Fenty.

The stunner was seen smiling happily as she put her behind to the camera while wearing the purple and pink set.

She teased fans by saying "Just a lil curvy x," as they lapped the post up – giving it more than 10,000 likes.

Izzy is known for her body positive snaps and quotes, as she told fans earlier this month 'style has no size', as she showed off her figure in a skimpy string, patterned bikini.