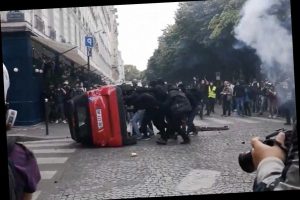 PARIS, June 16 – Paris police blamed violent fringe groups for hijacking a peaceful protest by health workers in central Paris on Tuesday, where at least one car was overturned and projectiles were hurled at police lines.

The unrest broke out as thousands of doctors, paramedics and nursing home carers, many dressed in their scrubs and white blouses, had been protesting near the health ministry for better wages and working conditions.

Paris police said anarchist protesters known as “black bloc” were attacking its officers. Several were seen in video footage pushing an overturned car into the middle of a cobbled avenue as others threw missiles at the police.

“Violent individuals do not belong in a peaceful demonstration,” the Paris police prefecture said in a Tweet.

Tear gas swirled over the Invalides esplanade. Some protesters threw glass bottles and stones at the riot police who formed up along one side of the park. Firefighters extinguished one rubbish bin that had been set alight.

At least 16 arrests were made, police said.

The head of the Paris emergency room workers association told BFM TV the protest had been stolen from them: “It’s disgusting,” Patrick Pelloux said.

Even before the pandemic, health workers participated in nationwide labour unrest late last year. President Emmanuel Macron’s government unveiled emergency plans in November for the sector, including a promise to take on some debt of hospitals, raise health spending and provide bonuses for nurses.

“Our hospitals run like machines, it’s as if we’re workers. We’re no longer there to care,” said one protester who said she earned 1,450 euros a month after 10 years in the job.