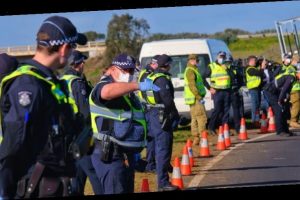 Birthday revellers at a CBD venue and people at a religious gathering in a Dandenong factory are the latest to be fined for breaking Victoria’s COVID-19 rules.

Twenty-six of the infringement notices for breaching the Chief Health Officer’s directions were issued at vehicle checkpoints. Eighteen of those went to people who failed to wear a face covering. 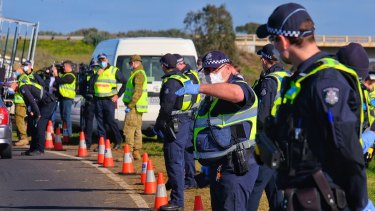 Police and defence personnel at a checkpoint on the Princes Freeway on the outskirts of Melbourne in July. Credit:Luis Ascui

"Many of these fines were issued to people who had no reason to not be wearing a mask, and refused to accept a mask offered by police or PSOs," a police spokeswoman said.

Police said five people were also fined $1652 each after being caught at a licensed premises for a birthday celebration in the CBD.

A Wyndham resident was caught after throwing a party with 10 guests, while police shut down a religious gathering of five people at a Dandenong factory.

More than 205,000 spot checks have taken place across Victoria since March 21.

An alleged drunk driver caught speeding on CityLink on Saturday night has also been fined $1652 for breaching COVID-19 directions.

Police on patrol in Burnley reportedly saw a Ford ute travelling at 130km/h in an 80km/h zone at 11.30pm on Saturday.

The driver, a 29-year-old man from Koo Wee Rup, returned an alleged blood-alcohol reading of 0.205.

The man's car was impounded and he is expected to be charged on summons with drink driving-related offences.

As Victoria's active COVID-19 cases neared 6000 on Saturday, a prisoner custody centre connected to the Melbourne Magistrates Court and staffed by police and corrections officers was shut down after two staff contracted the virus.

Prisoners in the centre have been relocated after the two new cases were revealed to police on Saturday.

Victoria Police would not provide numbers on how many staff were now on unplanned leave in quarantine as a result of being close contacts, due to "operational reasons”.

A police spokeswoman said the facility had been temporarily locked down and would be deep-cleaned.

“We are also working together, alongside the Department of Health and Human Services, to conduct contact tracing to determine whether anyone else from Victoria Police or inside the centre was in close contact with the two people who tested positive,” the spokeswoman said.

“The community can be assured that Victoria Police’s service delivery will remain unaffected during this time.”

Get our Coronavirus Update newsletter for the day’s crucial developments at a glance, the numbers you need to know and what our readers are saying. Sign up to The Sydney Morning Herald’s newsletter here and The Age’s here.