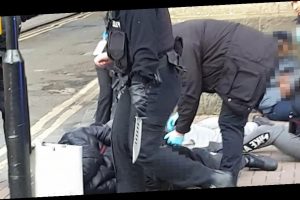 Police have seized a foot-long hunting knife from a group of thugs after receiving a tip-off from the public.

Video captures a policewoman taking the Rambo-style knife to a police van while other officers hold the five men onto the ground with their hands cuffed behind their backs.

Officers searched the suspects and escorted one man away towards a wall to question him.

The group were then taken to the back of the police van and brought to the police station.

A witness said he heard officer shouting at the group to "get on the ground".

He added: "I was on my lunch break.

"All of a sudden, i heard loads of sirens and wondered what was happening.

"The next thing I hear 'get down to the ground' and there's two police vehicles and six officers and I see five young men all down on the ground.

"I started filming and out of the pocket of one of the men, police pulled out a foot-long Rambo knife.

A spokesman for Greater Manchester Police said: "Police were called shortly after 1.50pm today [January 8] to reports that a man was in possession of a bladed article on Portland Street.

"A group of five men were detained to be searched by officers and a 19-year-old man was arrested on suspicion of possession of an offensive weapon in a public place.

"It is not believed anyone was approached with the weapon and no injuries have been reported."