Prince Charles and Camilla dancing at state dinner in Ghana

Dancing queen! The moment Camilla, 71, shook her stuff on the floor during a state dinner in Accra (while Prince Charles charmed Ghana’s First Lady)

Footage has emerged of the moment Prince Charles and the Duchess of Cornwall shook their stuff on the dance floor.

The couple, who are on a nine-day visit on behalf of the British government to West Africa, were enticed onto the floor at a state dinner in Accra by the President of Ghana on Monday.

Camilla, who was wearing a pink Anna Valentine evening gown with huge diamonds at her ears and throat, proved to be a formidably nifty mover as she boogied with the Ghanaian leader.

Twinkle-toed Charles held hands with the First Lady for a more traditional shuffle around the floor.

The prince was sporting the Companion of the order of the star of Ghana, honorary division, which had been just gifted by the President – with the help of several staff who struggled to get it over his dinner jacket. 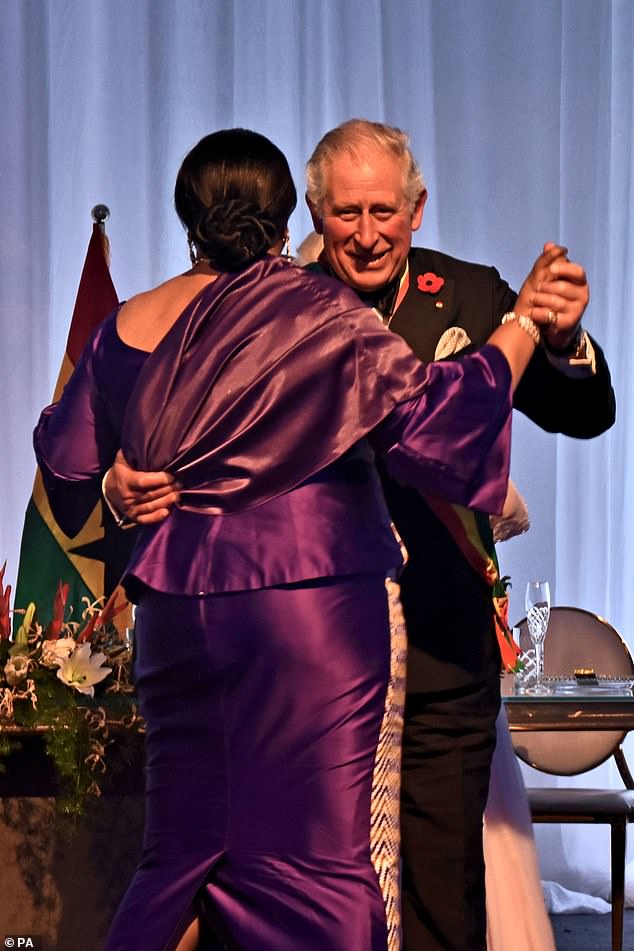 Charles dancing with the First Lady of Ghana Rebecca Akufo-Addo. He and Camilla are keen dancers and have displayed their talents in public on several occasions previously

Both Charles and Camilla are keen dancers and have displayed their talents in public on several occasions previously, the duchess even enjoying a quickstep with Strictly Come Dancing judge Craig Revel Harwood.

The glittering dinner was the couple’s last engagement in Ghana before flying to Nigeria, where the prince met with traditional rulers – and found a touching memento of his mother.

Charles was introduced to seven of the country’s most powerful regional leaders at the residence of the High Commissioner in Abuja and immediately spotted that one of them, the Emir of Kano, had arrived in a Rolls Royce Silver Wraith driven by the Queen when she visited the country in 1956.

It was subsequently bought by his grandfather, the Emir Muhammadu Sanusi. ‘So that car has been at the palace since 1956,’ he explained. 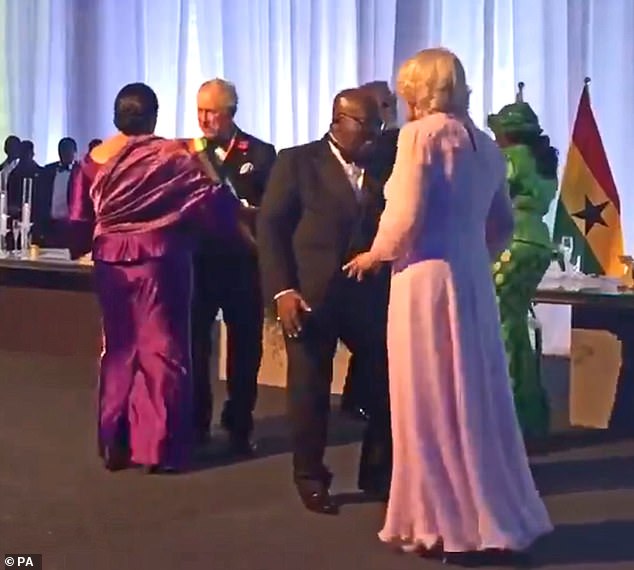 The Prince of Wales and Duchess of Cornwall were invited onto the dancefloor during a glittering state dinner in Accra, Ghana on Monday night with the president and first lady 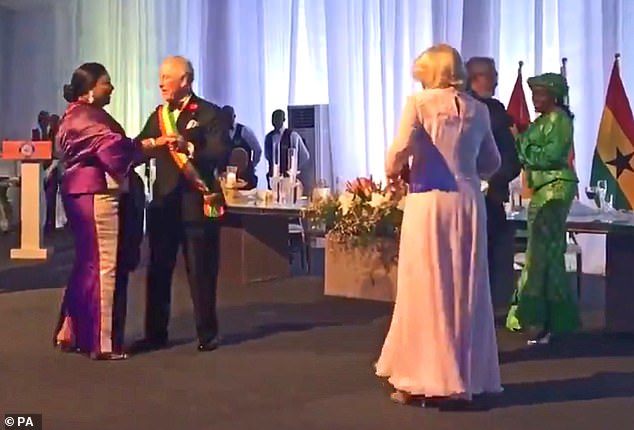 Camilla shakes her stuff at Jubilee House, Accra on the final day of her Ghana visit. Twinkle-toed Charles held hands with the First Lady, left, for a more traditional shuffle around the floor 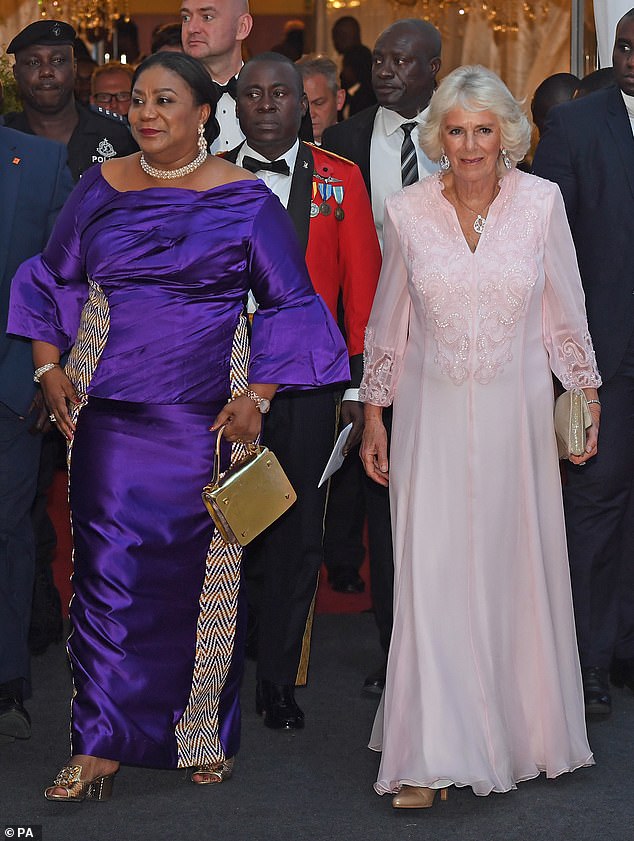 The Duchess of Cornwall attends a State Dinner with Ghanaian First Lady Rebecca Akufo-Addo at Jubilee House, in Accra, Ghana on Monday evening. The couple then headed to Nigeria

Asked whether he drives it very often, he said: ‘Well, I drive it when I want to show off! If I come to Abuja and have a meeting with the President then I often take it as no-one has a car like that.’

The seven leaders, dressed in their traditional finery, arrived in a procession of vehicles shortly before the prince and were shielded from the sun as they stepped out by staff bearing brightly-coloured parasols.

They waited inside for the guest of honour to enter before being introduced to him, one by one.

After a handshake and an exchange of pleasantries, each man leader offered the British royal a gift – bowls, fans and books – which Charles warmly thanked them for.

The group was led by His Eminence, the Sultan of Sokoto, and followed by the impressively dressed His Imperial Majesty, the Ooni of Ife, who also carried a glittering staff. 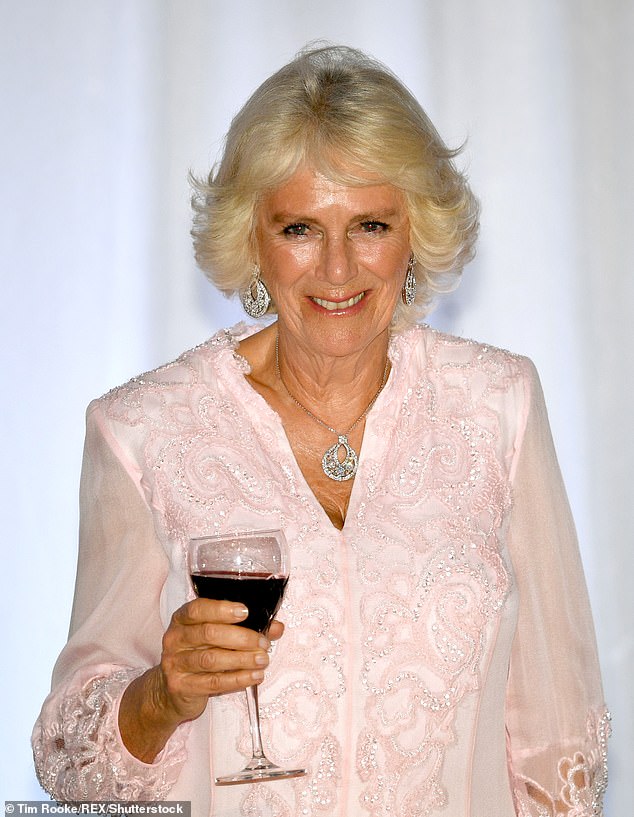 Cheers! Camilla was wearing a pink Anna Valentine evening gown with huge diamonds at her ears and throat for the state banquet in Accra, Ghana on Monday 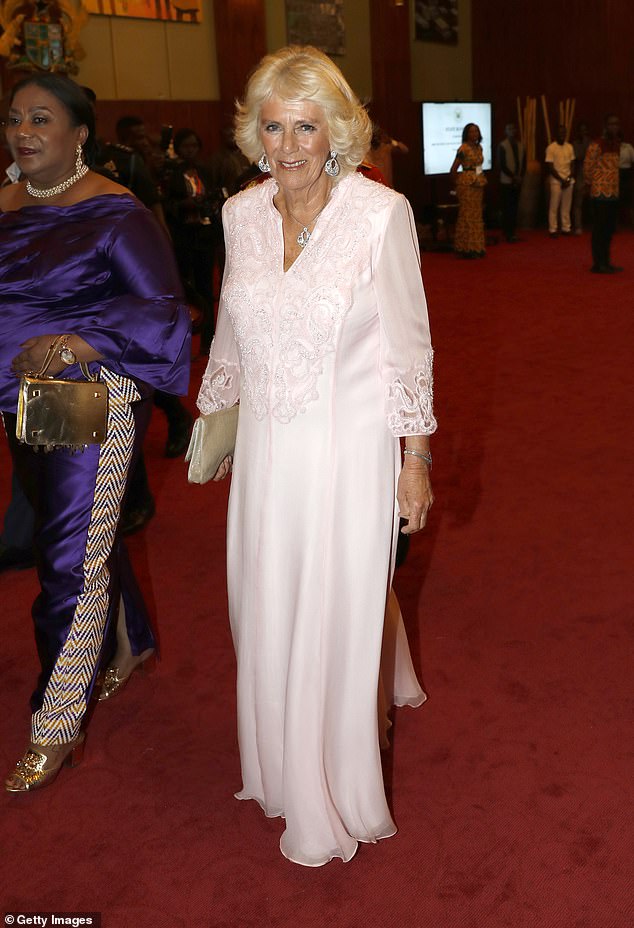 The Duchess of Cornwall pictured at the glittering dinner on Monday night, the couple’s last engagement in Ghana before flying to Nigeria, where the prince met with traditional rulers – and found a touching memento of his mother

One member of the entourage couldn’t resist snapping a royal selfie of his boss, the Emir of Kano, with the prince, despite the solemnity of the occasion.

The royal party then posed for a group photograph.

Nigeria’s traditional rulers have their origins in the independent states and kingdoms that existed in Nigeria before the colonial period.

They still continue to command significant respect and influence in their respective communities.

After the introductions, the group sat down together for a discussion led by the British High Commissioner, Paul Arkwright.

He described it as a ‘very rare opportunity’ for so many of the traditional rulers to come together.

He said the prince was keen to hear from them about the work they are doing to promote ethnic cohesion in a country riven by violent rivalry that has left thousands dead and what the UK could do to help.