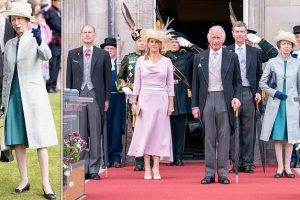 Royals step in for the Queen: Prince Charles, Sophie Wessex and Princess Anne host Holyroodhouse garden party – but Her Majesty stays away despite being in residence

Prince Charles, Prince Edward, Sophie Wessex and Princess Anne hosted guests at a stunning garden party this afternoon – while the Queen did not attend despite being in residence.

The royal family is on a trip to Scotland to mark the annual Holyrood Week, which takes place between the end of June and beginning of July. It sees the Queen, 96, and her family members tour around Scotland meeting Scots from all walks of life.

A key feature of the visit is today’s garden party at the Palace of Holyroodhouse, which recognises Scots’ good work in the community.

Stepping in for the Queen, the Countess of Wessex wore a dusty pink dress complete with white stilettos and understated silver jewellery.

The Princess Royal wore a jewel-coloured teal dress with a light blue jacket and a white hat to greet guests.

Earlier in the day, Her Majesty met with Scottish First Minister Nicola Sturgeon and Alison Johnstone, the presiding officer of the Scottish Parliament.

Princess Anne, Prince Charles, Prince Edward, Sophie Wessex and Vice Admiral Sir Tim Laurence posed for photos as they welcomed guests to the garden party at the Palace of Holyroodhouse in Edinburgh 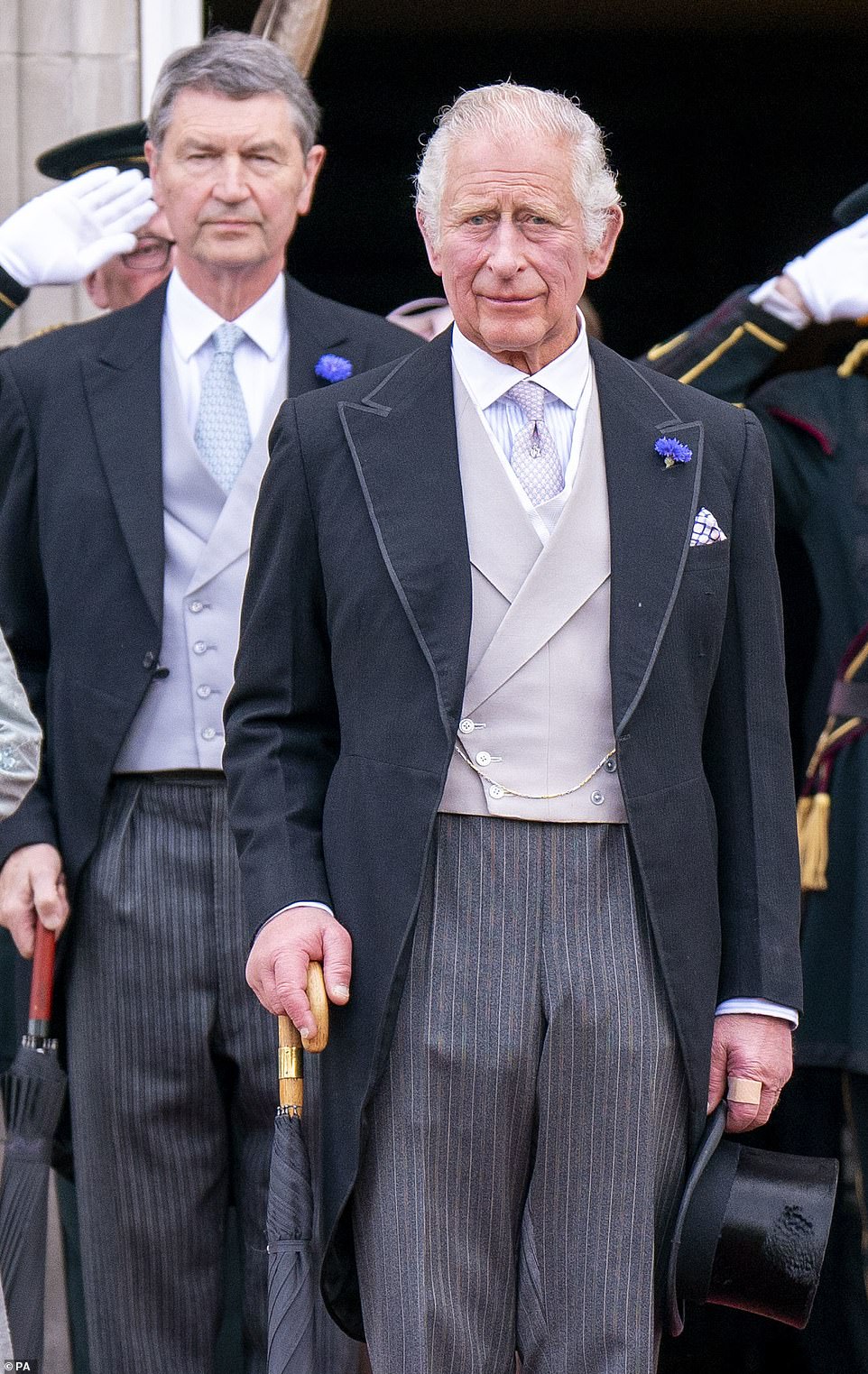 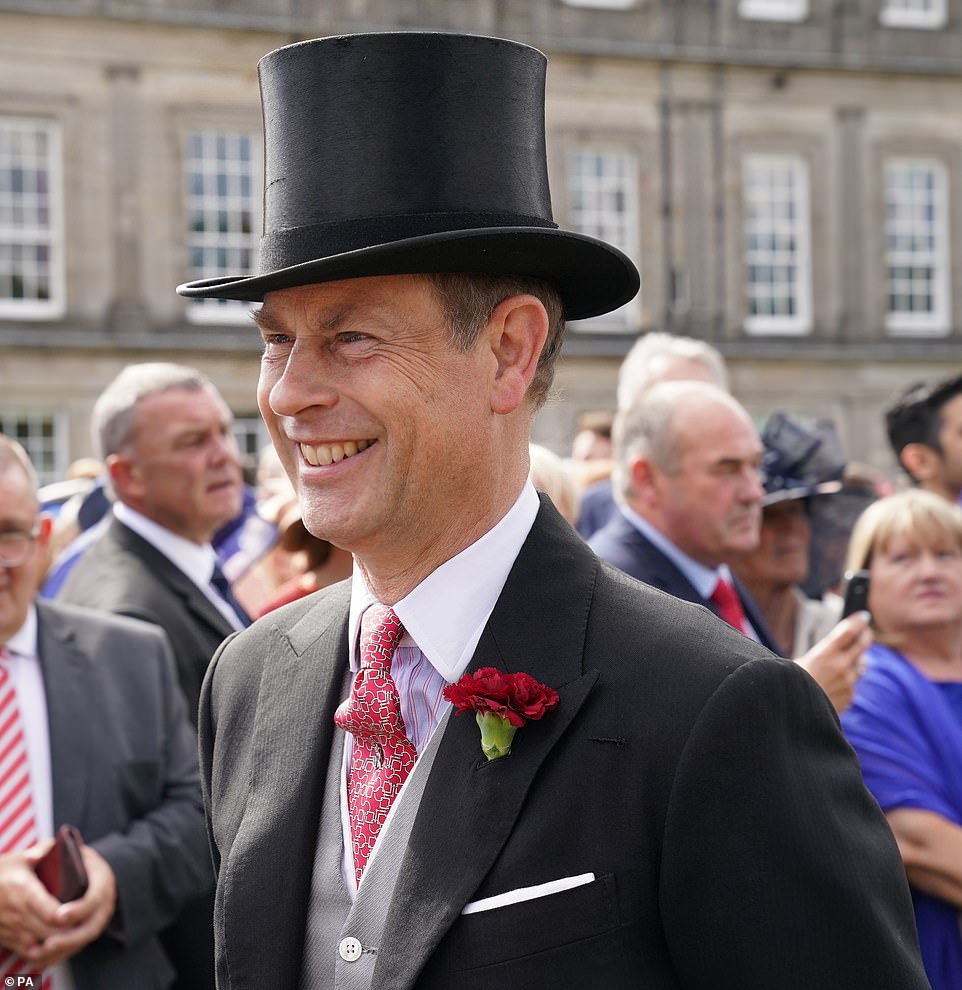 In a meeting at the Palace of Holyroodhouse, Ms Sturgeon gave The Queen several gifts including a limited edition bottle of whisky.

The meeting came just a day after Ms Sturgeon announced she was proposing to hold a second Scottish Independence Referendum on 19 October 2023.

But at the same venue this afternoon the Queen appeared to be absent while three of her children greeted guests who had been invited to the garden party.

Princess Anne, Prince Charles and Prince Edward appeared at the party and posed for a family photo, alongside Sophie Wessex and Vice Admiral Sir Timothy Laurence.

The Holyrood Week trip is the first time the Queen has been spotted alongside the Royal Family since the Platinum Jubilee earlier this month.

On Monday the monarch was accompanied by Prince Edward and Sophie Wessex at the traditional opening of the week.

TheEarl and Countess of Fofar, as they are known in Scotland, appeared alongside the Queen in Edinburgh at the historic Ceremony of the Keys. 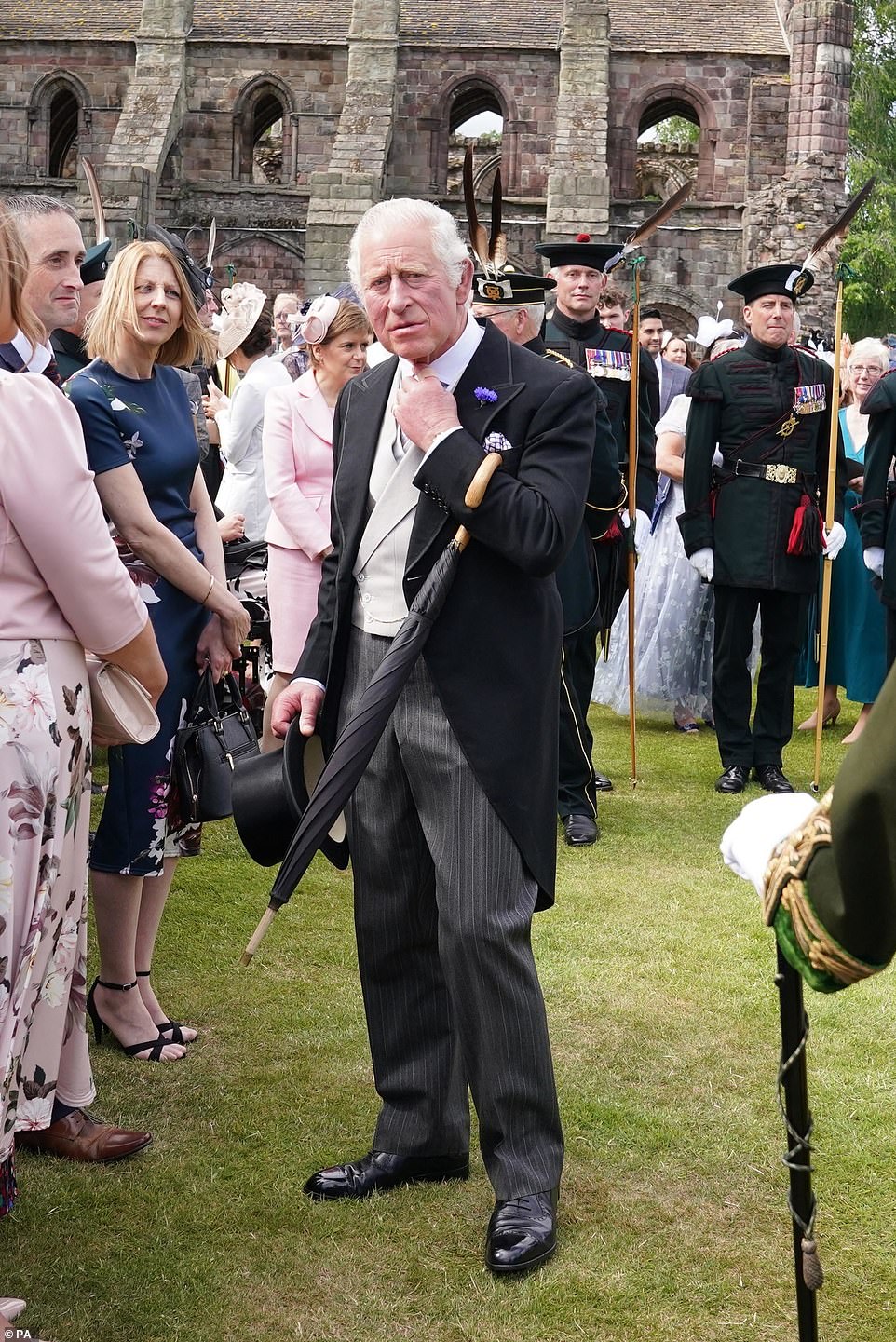 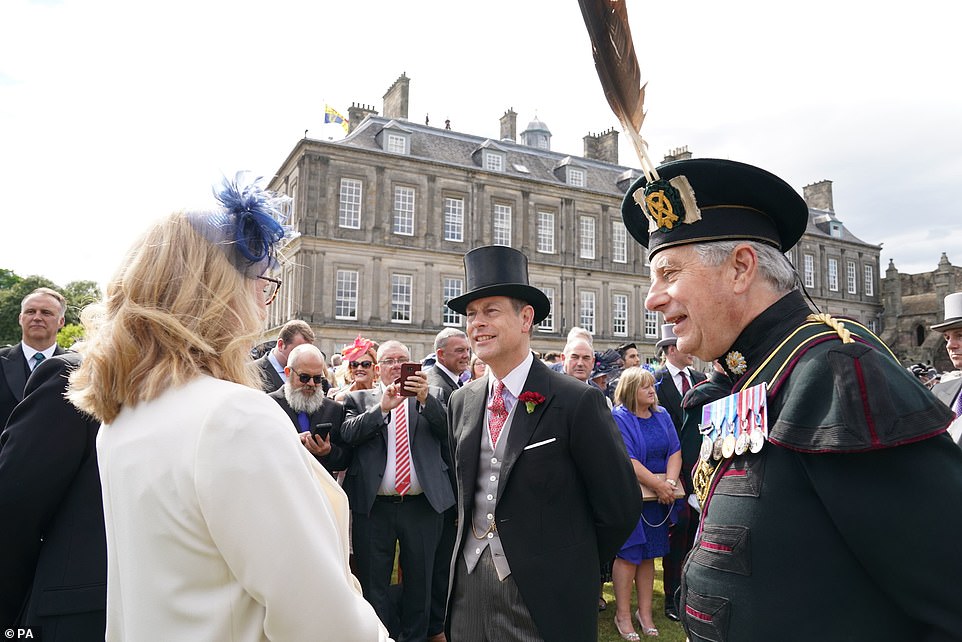 Prince Edward met with guests from all over Scotland, who were invited in recognition of their community work

Pretty in pink! Sophie Wessex wore a sleek dusty pink dress with a pink hat and fascinator as she welcomed guests 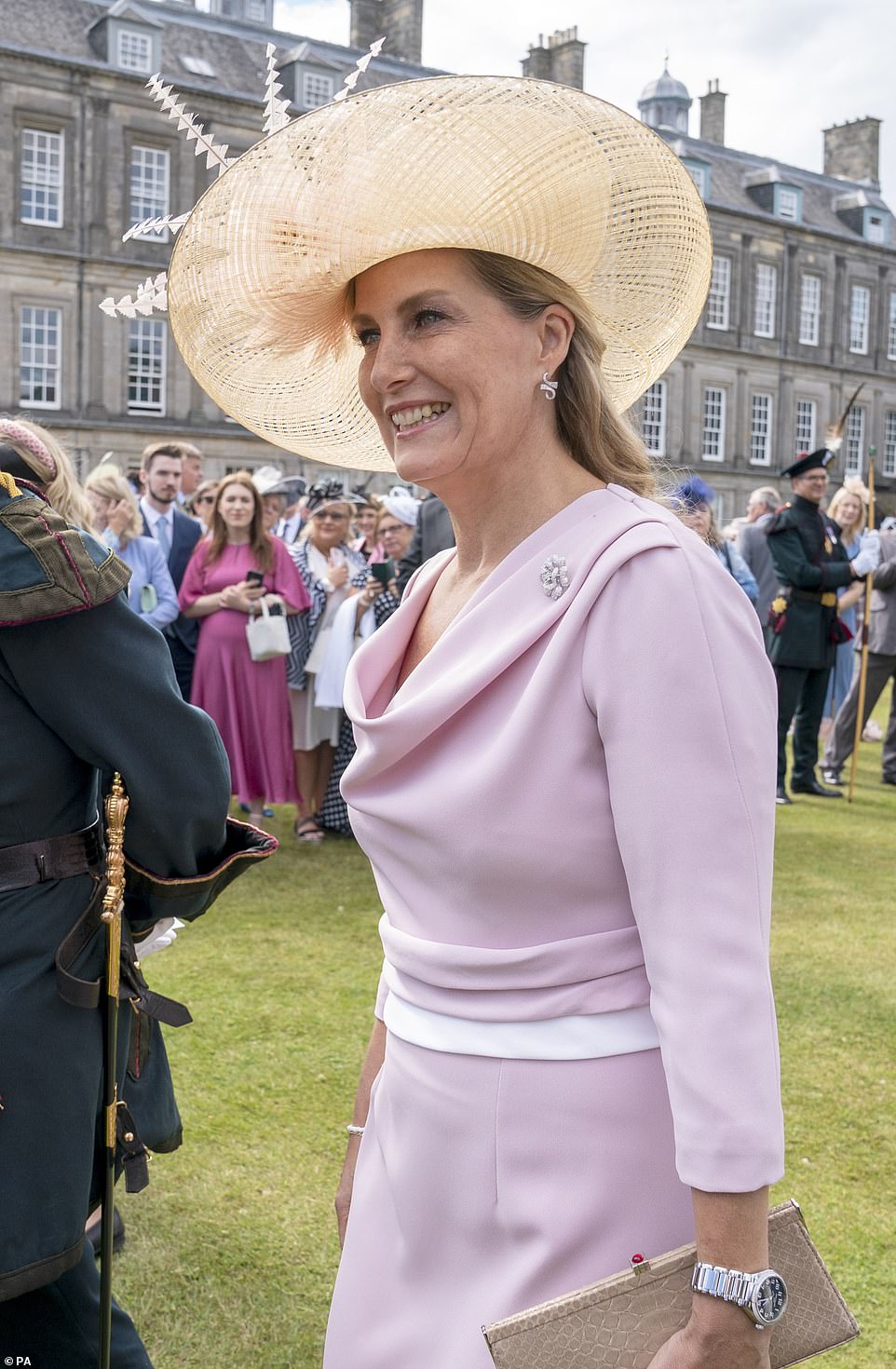 The mother-of-two looked the picture of elegance, wearing understated jewellery and a silver watch as she welcomed guests to the party

During the ceremony, the the Queen is presented with the key to Edinburgh, the ‘ancient and hereditary kingdom of Scotland’.

As is tradition, she then returns them to elected officials in the city for safekeeping.

The Queen beamed at the ceremony on Monday while appearing with a walking stick.

Buckingham Palace has said she is suffering from ‘episodic mobility problems’ which sometimes mean she has to use walking aids.

Prior to the the Platinum Jubilee celebrations marking her 70th year on the throne earlier in June the monarch had pulled out of several appearances including the state opening of Parliament in May.

Stepping in, Prince Charles and Prince William instead attended the House of Lords where the Prince of Wales delivered the Queen’s Speech. 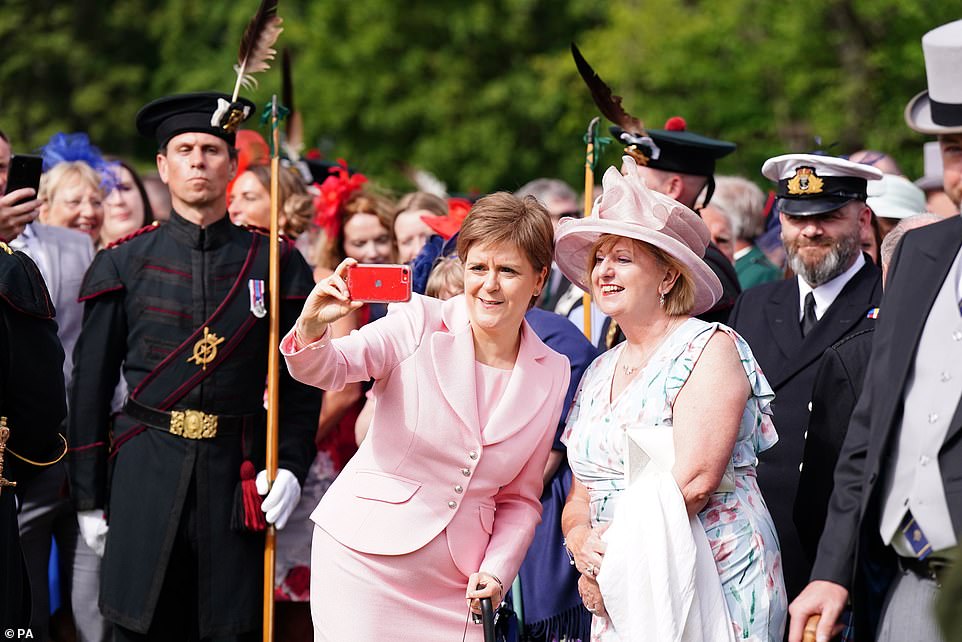 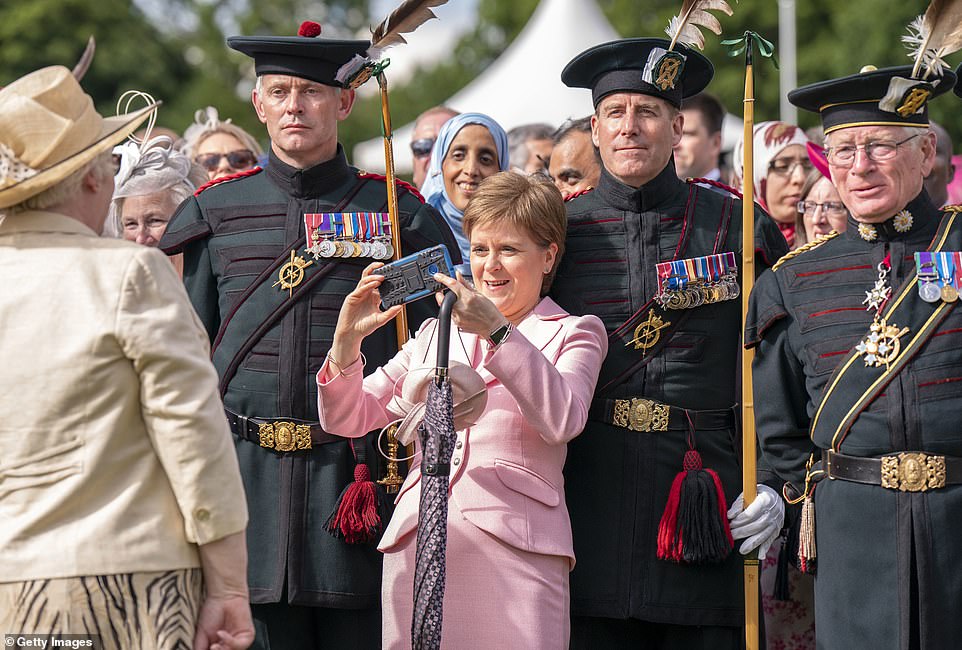 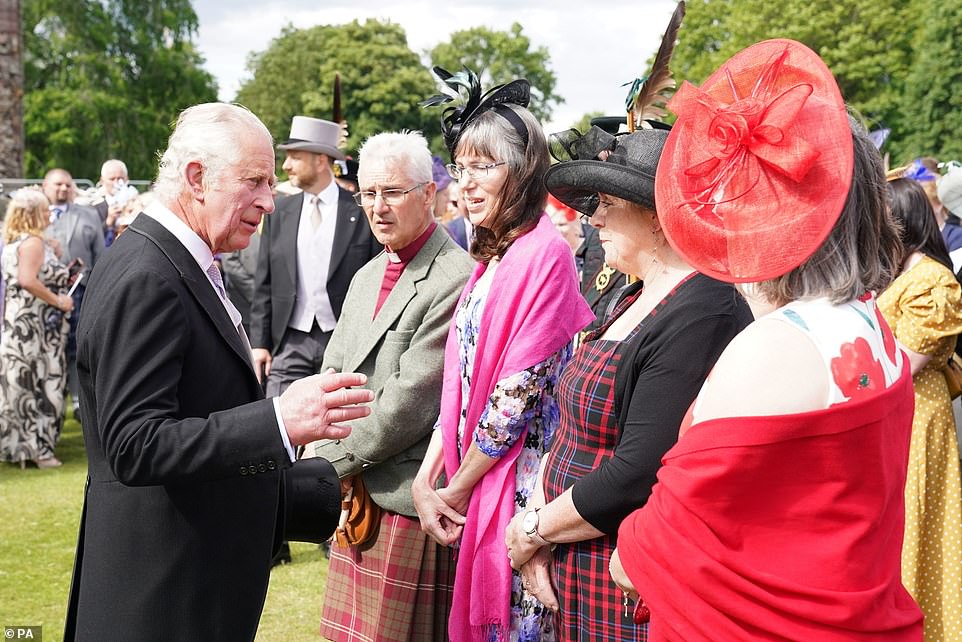 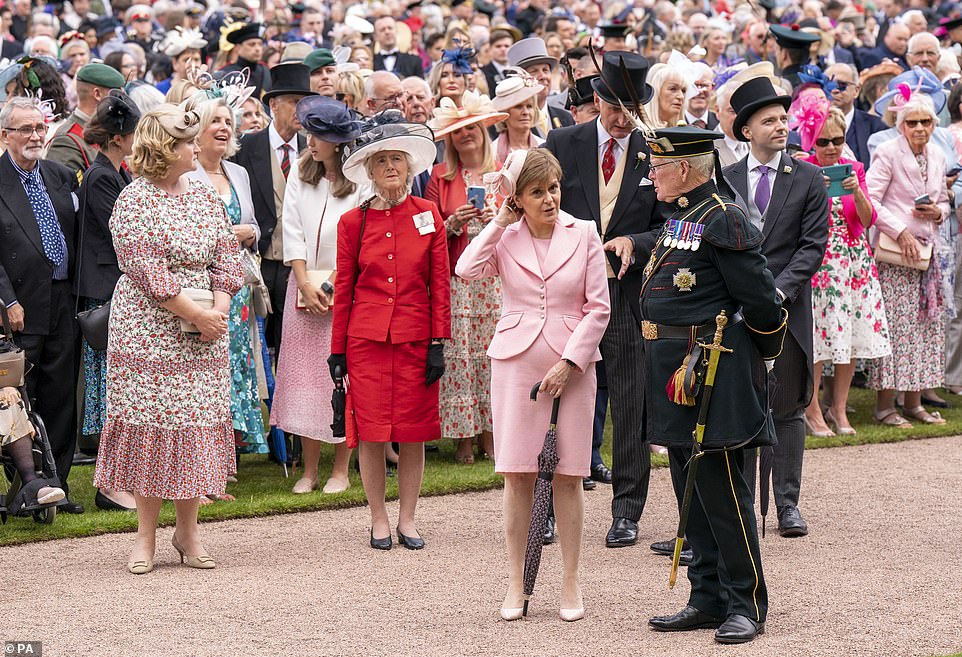 Scottish First Minister Nicola Sturgeon, who met with the Queen at the Palace of Holyroodhouse earlier today, arrived at the garden party 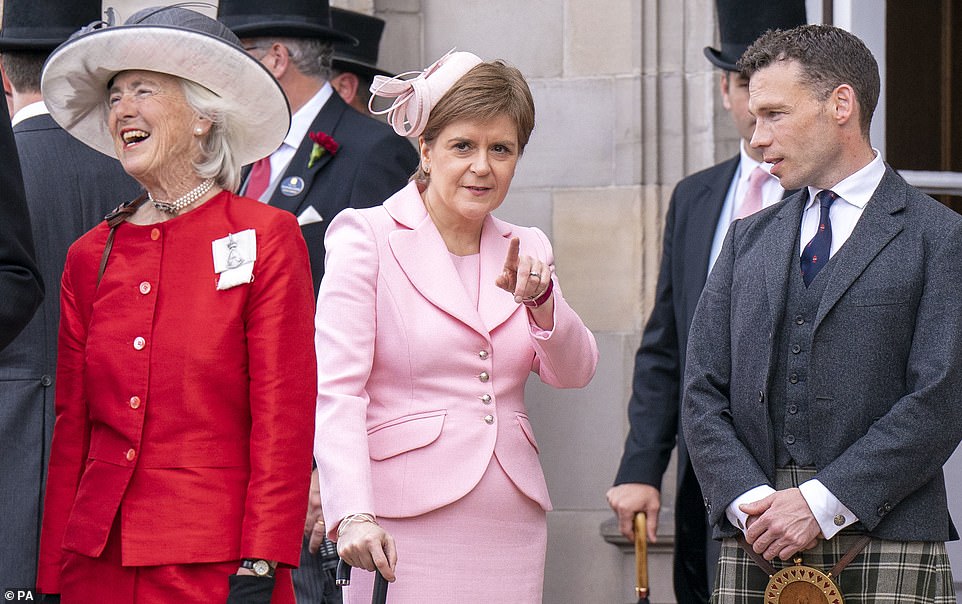 The First Minister, who gifted the Queen a limited edition bottle of whisky, chatted to other guests 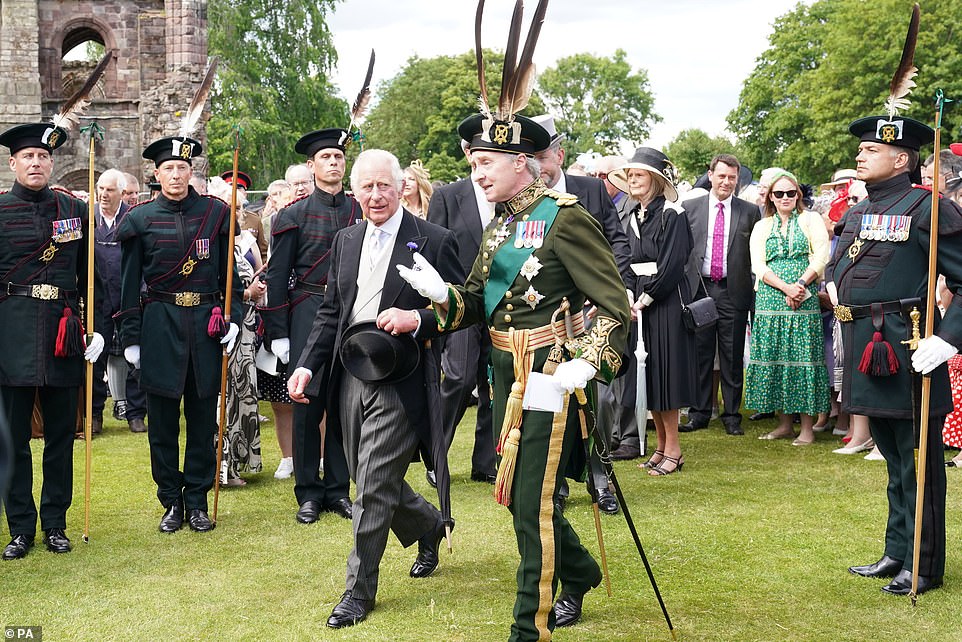 Prince Charles took the reins in hosting the garden party, stepping in for his mother while donning a pinstripe suit and tails 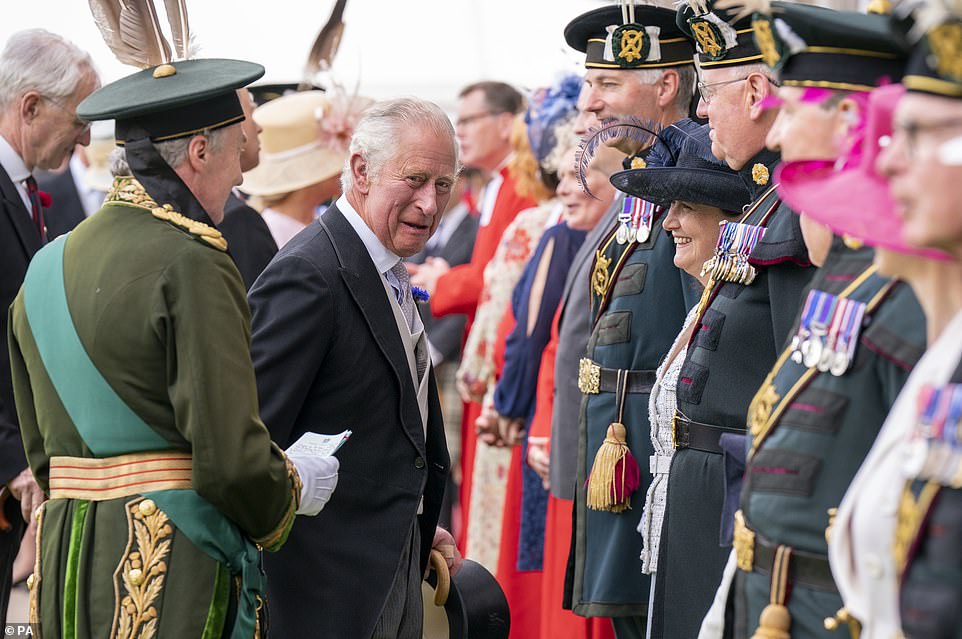 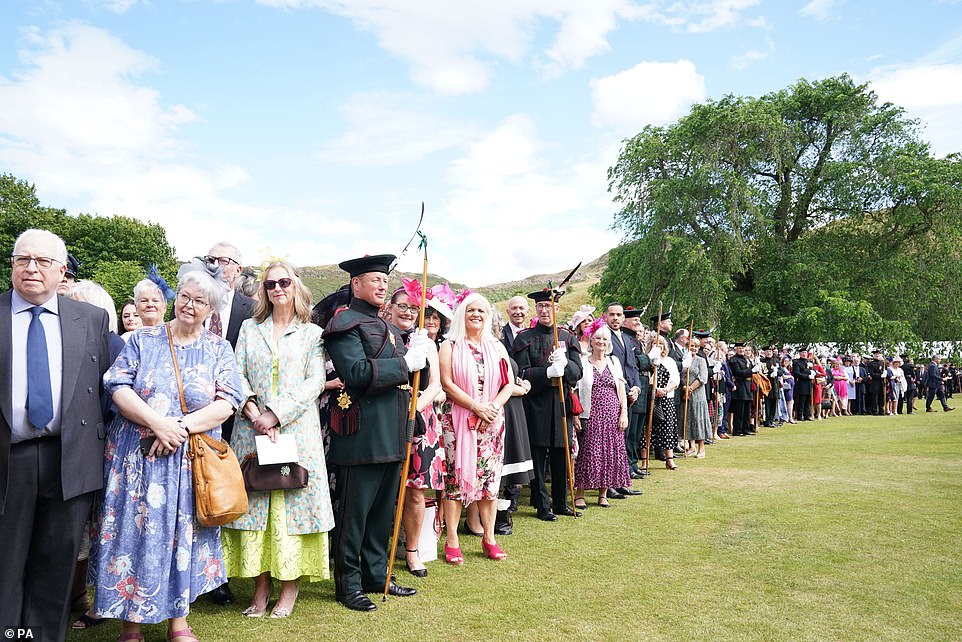