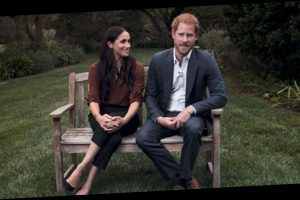 Sad news for Prince Harry, as he recently announced that his beloved Invictus Games was being postponed.

The Duke of Sussex revealed the news in a video shared to Twitter featuring other athletes. Speaking in turn the royal and other athlete explained: "We are Invictus.

"We have seen struggles, we felt loss and pain. We survived. And we will thrive.

"We serve, we commit. We persevere. We heal.

"To the key workers on the frontlines in the battle against the pandemic – we are with you."

However, although this may be bad news for many, for fans of both Harry and his wife Meghan Markle, the video afforded us a glimpse inside the kitchen of their LA mansion.

Granted, we cannot see too much, but we now know that the couple have cream walls in the space, as well as in-built cabinets with brass knobs.

The couple live in a sprawling home in Montecito, California alongside their one-year-old son, Archie Harrison Mountbatten-Windsor.

It is reported to be worth £11.2 million and feature nine bedrooms as well as a whopping 16 bathrooms.

Thanks to Zoom, fans have been given plenty of glimpses from inside the lavish home since the couple moved in last year.

The Duchess of Sussex first shared the couple's living room during a surprise appearance on America's Got Talent.

Their stack of books gives an insight into their tastes and opinions and features feminist literature and photography.

While A Photographer's Life; 1990-2005 by Annie Leibovitz, the celebrity photographer who has captured portraits of the Queen, Harry's grandmother, is also visible.

The prints behind Meghan are believed to have been gifted to the couple from their friend and now neighbour Oprah Winfrey.

The illustrations appear to be of nests and in Feng Shui, images of a nest are said to represent stability and family.

A bunch of hydrangeas can also be seen in the shot which are believed to symbolise appreciation and heartfelt emotion, so may well have been a gift from Prince Harry.