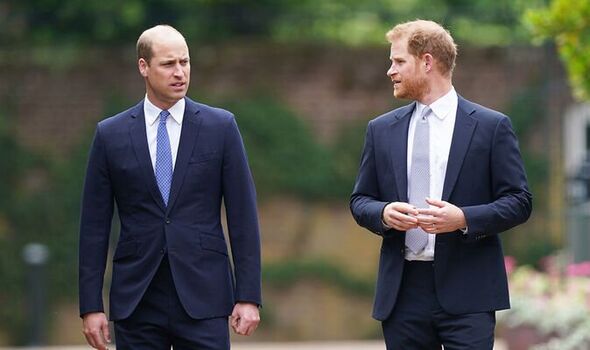 Prince Harry and Prince William are set to have several interactions over the Jubilee weekend. Express.co.uk spoke to leading communication and body language expert Judi James about the two brothers’ most recent interactions and how their physical displays suggest there is still some tension with each other.

“We watched a grim-faced William and a haunted-looking Harry reach perhaps the lowest point in their relationship in terms of their public displays during Harry and Meghan’s final UK appearance before quitting to start a new life in the US,” Judi claimed.

“There was no communication between them at the Abbey service [in 2020].

“Harry and Meghan were already seated when William and Kate arrived and although Meghan did smile in greeting, the way her face dropped quickly suggested the smile had not been returned.

“Harry, on the other hand, looked like a man who had given up and resigned himself to what looked horribly like a fatal rift with the brother he had once been so close to.”

The expert continued: “The two men had grown up united in grief and bonded by banter. Their relationship was undiluted and intense.

“Unlike Charles and Andrew, there were no younger siblings to keep what also appears to have been a very competitive relationship in check.

“William grew and married but Harry appeared frozen in time as the cheeky, loveable baby brother.

“Even after he’d come back from Afghanistan a grown man and a hero, William was still teasing him affectionately on camera about his untidiness like an embarrassing dad teasing a teenage son.”

She added: “The love between them looked unquestionable but like most sibling relationship there were clearly complications.

“Banter only works when it is mutual and everyone keeps within the boundaries, otherwise it can become a form of passive attack.

“Underpinning William and Harry’s banter was the fact that William would always be the boy born to be King.

“Normal siblings do at least get a chance to outstrip a high-achiever with a glittering career, but with William and Harry the pecking order was a matter of destiny and it was clearly going to get worse.

“William was the one inheriting the highest title and the one with the beautiful wife while Harry was struggling through one relationship after another, clearly desperate to start a family of his own.”

Judi explained further: “And of course there was the ever-present Diana. Harry’s interview with Today at the Invictus Games [earlier this year] hinted at something that should have been obvious.

“Harry’s body language here seems to define an ongoing tragedy between himself and his brother that is both historic and current.

“When he stands speaking about his mother and William though the signals of separation and ‘ownership’ could hardly be more emphatic.

“Asked if he felt his mother’s presence he replied that it had been ‘constant over the last two years.’ i.e., since he had moved to the US.

“He added Diana had ‘done her bit with my brother….she got him set up…he’s got his kids…now she’s helping me.’

This narrative came with a very telling gesture.

“As Harry spoke about William he stretched his left hand out in the air with the palm flattened and facing outward in a distancing and a dismissing gesture.

“It suggested pushing his brother away now that he had his mother back again.

“There was a suggestion of an unfair sharing of their mother even after her death and that Harry could only reunite with her once he had quit the royal firm and started a life of his own.”

Judi added: “The unveiling of Diana’s memorial statue brought the brothers together again but only to go through the motions in terms of bonding and unity.

“Like Philip’s funeral, there seemed to be an ability to play nicely together for the cameras but with no reported truces behind the scenes.

“Harry now speaks frequently of being his ‘mother’s son’. This clearly relates to his desire for freedom and his campaigning work. But it might also relate to his feelings towards his father and Camilla.

“Meghan is always cited as being part of the cause of the split between William and Harry but, added to historical footage as well as some of the recent body language signals, it could be that her role was less important than suggested.

“William and Harry’s relationship involved the strongest love and the bitterest break.

“Over the years we have seen the two brothers sharing moments of affection, friendship, grief and fun.

“We have also seen the awkwardness and pain etched on their body language after the rift,” the expert suggested.

“Now, with even more acrimony between them, they will be preparing to meet again at the Jubilee celebrations.

“Their love for their mother produced a rather rigid show of polite unity at her statue unveiling and their love for their grandfather Philip saw them at least going through the motions of exchanging some form of small talk at his funeral.

“I’m sure their love and respect for their grandmother the Queen will produce a similar display of ‘unity’ before Harry blasts back to the US, but at a time that should be all about joy and celebration, it will be only too easy for all the suppressed drama to upstage the main event,” Judi opined.

Judi 26 fiction and non-fiction books covering a range of subjects boosting your confidence to improving flirting techniques, tips on how to win a poker game, and titles include The Body Language Bible.