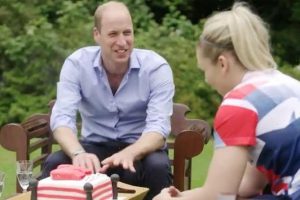 Prince William, 39, shed his formal royal ways and presented a more laid back side to himself during a new video. The Duke of Cambridge seemed to mimic his late mother Princess Diana’s down to earth ways as he sat down with Team GB boxer Lauren Prince ahead of the Tokyo 2020 Olympic Games, a body language expert has claimed.

Kensington Palace shared the new clip of William on Twitter and linked fans to the full video on YouTube.

A description of the video on the Kensington Palace YouTube channel reads: “It was great to chat boxing, football, birthday celebrations and taxi driving with Team GB’s Lauren Price ahead of #Tokyo2020.

“Lauren will become Wales’ first female boxer to compete at the Olympics this summer, having won kickboxing world titles as a teenager and played international football for Wales before switching to boxing in 2014.

“In 2019 she won gold at the World Championships and European Games, and is also the reigning Commonwealth Games champion and ranked world number one.”

In a lighthearted snippet of the sitdown shared on Twitter, William surprises Lauren with a cake to celebrate her 27th birthday.

The future king walks off camera to collect the cake before carrying it into the frame and placing it down on the table in front of the boxing star.

William said: “I hope it tastes alright but you can take it home with you, you don’t have to eat it all now!”

He added: “Happy Birthday for today and hope you have a good day. We’ll all be wishing you well, Lauren, and cheering you on.

“You’ll do us very proud in the Olympics, I’m sure, and you’ll do everyone proud in your hometown, and your grandparents as well, so best of luck!”

Body language expert and author Judi James analysed the new footage of William and shared her insights with Express.co.uk.

According to the expert, the future king mimics his mother Princess Diana’s “humble” approach in the new clip.

Judi said: “William manages to achieve something that is rare in the royal family here: he actually makes this look like the kind of chat anyone would be pleased, happy and comfortable to have, royal or not.

“William appears to be the best company here and the sort of guy you’d want to spend your birthday with, even without his royal title.”

The Duke of Cambridge comes across as “natural and authentic”, Judi claimed.

She added: “His body language techniques appear authentic and natural rather than planned but he uses two powerful behaviours to make this birthday treat a very enjoyable one for Team GB boxer Lauren.”

She added: “Firstly there is the self-lowering technique.

“It’s William leaping up with enthusiasm to go and get the birthday cake and he even mentions that Lauren doesn’t have to move, he will bring it to her.

“In the great scheme of life this gesture might not be unusual but for a royal it is.

“Carrying a cake to the table is usually a job done by staff, especially for a royal appearance like this, but this more natural approach lowers William’s status signals and makes him look fully involved in the cake-making decisions.”

The Duke mirrors Lauren’s body language during their chat, the analyst claimed.

Judi added: “Then there is the easy-going but very impressive mirroring.

“Lauren is already sitting forward in her chair with her elbows on her legs and her hands clasped.

“When William sits down he mirrors this pose to create a sense of empathy and to make Lauren feel more confident and comfortable.”

William breaks with royal formalities to interact with Lauren in the way his late mother Diana did with members of the public, Judi explained.

She added: “This body language ‘matching’ was once rare in upper royal circles, as royals of William’s father’s generation and older always maintained a regal bearing no matter who they were meeting.

“Diana broke through that particular glass ceiling and it is good to see William and Kate maintaining the mirroring techniques today.”